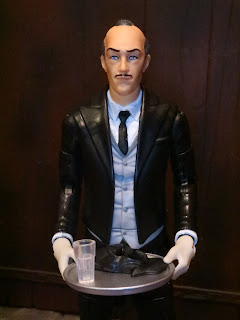 Today I'm checking out the last standard figure in the last series of Mattel's DC Comics Multiverse line and it's Batman's stalwart ally, best friend, and surrogate father, Alfred Pennyworth. Alfred has shown up in many toylines before including DC Direct's Batman: Hush line, Hasbro's Batman the Animated Series line, Diamond Select's Gotham line, and Mattel's The Dark Knight Rises line. Of course, since Mattel has been making comic based DC figures in a similar scale and stlye for well over 15 years, the lack of Alfred Pennyworth in that style has been a noticeable omission. Finally, after all of that time, it's very welcome to get Alfred in the last series of figures. He turned out well. Very well, in fact. Seriously, Mattel gave this guy some incredible accessories that really make him stand out. Alfred Pennyworth has been the hardest figure to find from this series, so let's find out why after the break... 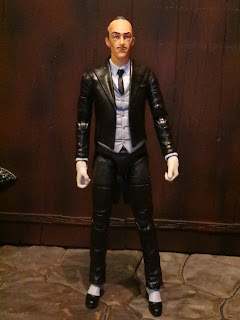 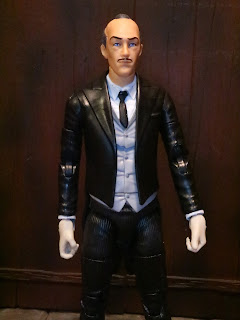 
* Throughout his comic appearances Alfred Pennyworth has a very consistent look since 1943 which Mattel has captured beautifully. There's no doubt as to who this is and his tuxedo is amazing. The body of the jacket is a separate piece, but there's no reason to remove it as the sleeves are part of the sculpt. The suit looks perfect, Alfred's tall, thin frame is captured quite well, and the paint applications are extremely neat and clean. Just like Alfred! 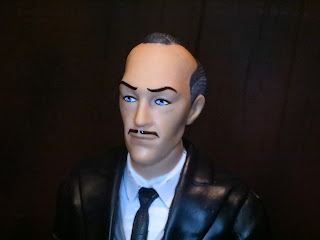 * I love the headsculpt. Again, it's a very classic headsculpt that captures Alfred's upper class charm. He's got that pencil thin mustache, expressive eyebrows, and a look on his face that makes the figure appear as if Alfred is just about to bust out a witty comment. 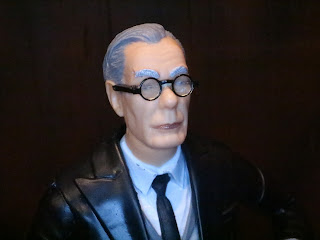 * Wait! What's this? Yes, Alfred has multiple portraits and the second portrait is based on Michael Gough, who played Alfred in Tim Burton's Batman films as well as Joel Schumacher's ......travesties. There's nothing you can say against Gough's performance, though, as his Alfred was always an excellent take on the character. He was warm, charming, and he didn't mind stepping in to assist Batman as needed with some backup (I love the scene in Batman Returns where he helps guide the Bat-ski through the Gotham City sewers). This is a welcome treat, although the only Batman from that series Mattel released was Val Kilmer from Batman: Forever. 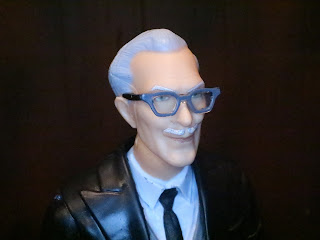 * Wait? Another different Alfred portrayal? Yes! The third headsculpt is Alan Napier, who portrayed Alfred in the 1966 Batman TV Series. This is an excellent sculpt and a great inclusion as Mattel offered quite a few figures from that series back in 2013. Mattel's figures weren't as impressive as they should have been but being able to add Alfred to that line-up is a welcome addition indeed. 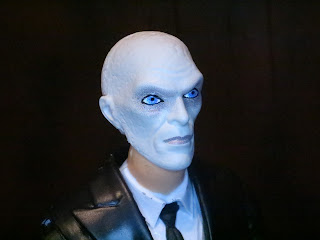 * The last headsculpt is certainly the most unusual: It's Alfred Pennyworth as the Outsider, a villainous, resurrected version of Alfred from pre-crisis continuity. It's a very creepy looking headsculpt and while it's probably the least desirable head in the set, it's still a pretty amazingly obscure accessory. Where have the folks who worked on this series of figures been over the last few years? 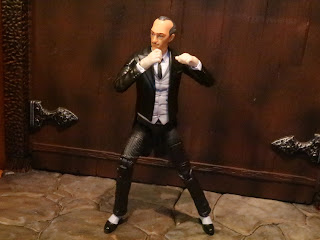 * While he's clad in an immaculate tuxedo, that doesn't mean Alfred can't throw down when needed. He's sporting some excellent articulation and feels like a quality figure. Easily the best Alfred figure ever released, hands down. 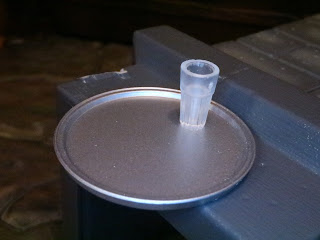 * Alfred also comes with a silver serving tray and a clear glass. Despite getting involved in many of Batman's adventures, Alfred still makes sure the Bat-family is well cared for and well fed. 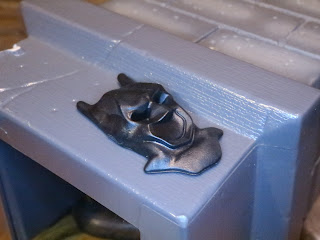 * The last accessory is Batman's cowl. It's flat on the bottom, so it seems designed to fit on the tray. Maybe Alfred is taking it from Batman to be laundered. Or maybe it's included as a nod to the cover of Batman #686 which depicts Alfred grieving over Batman's presumed death, holding the empty cowl and cape in his hands. 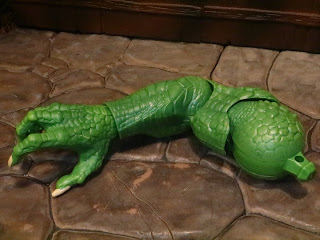 * Alfred comes with Killer Croc's right arm as his Collect & Connect piece. I'm really excited to build this guy and I'll be getting to Killer Croc soon (I've already got the pictures taken). Croc seems like he's going to be a really good figure. It's been a long time since Mattel's last comic based Croc (well over 10 years) so this guy is a welcome addition. 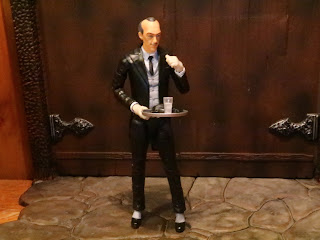 Alfred is a dream figure. While we've had Alfred Pennyworth figures before, this is the guy I always think of when I think of Alfred. He's well made, has some cool accessories, and, if you're a bigger fan of Michael Gough or Alan Napier's takes on the role, Mattel has you covered, too. This guy is 100% Epic and one of the best DC Comics figures this year. This series has a great character selection, awesome accessories, and great distribution (seriously my local Wal-Mart has restocked this series 3 or 4 times now). Why couldn't Mattel have run the line like this a few years ago?