Road to The Rise of Skywalker: Luke Skywalker (Skywalker Strikes) from Star Wars: The Black Series Phase III by Hasbro 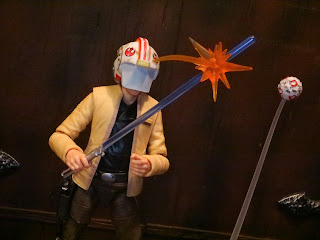 Does anyone feel like having an opinion on Star Wars one way or the other is like wading into a minefield these days? Sheesh!
That being said, despite not liking The Last Jedi very much, there's still quite a bit to like about the Disney era of Star Wars with one of the best things being the steady stream of quality comic books from Marvel. I really love the ongoing Star Wars series from Marvel set between A New Hope and The Empire Strikes Back (which is getting ready to reset its numbering since it will not cover time between Empire and Return of the Jedi) as they absolutely remind me of the stories I imagined as a kid playing with my Kenner POTF2 figures. When Kenner finally released Luke Skywalker in his slick yellow jacket, he became my go to Luke. I was thrilled that Marvel used this outfit for Luke's default look in the new comic series, too. Hasbro has released two versions of this figure in the Black Series and today I'm checking out the deluxe version that is based on the comic appearances (the other version is referred to as Yavin Ceremony). This guy is referred to as "Skywalker Strikes" and he comes in a cool display box that is loaded with accessories from the comic series. Let's check this version of Luke out after the break... 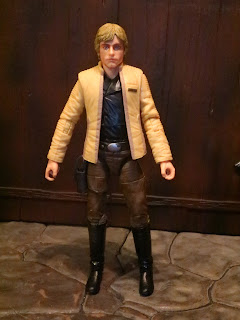 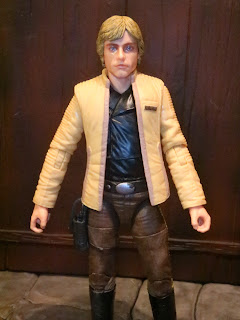 
* This is one of my favorite Luke Skywalker outfits and Hasbro did an excellent job of capturing it. They didn't do anything different with this figure from the standard Yavin Ceremony release, so they are pretty much exactly the same figure with different accessories, but it's accurate to both the film and the comic look. I love the subtle lighter stripes on the jacket and the design of the black shirt underneath. This is such a cool outfit! 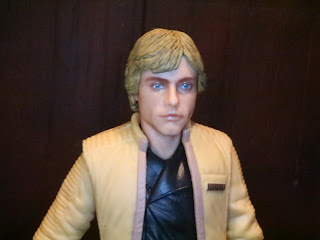 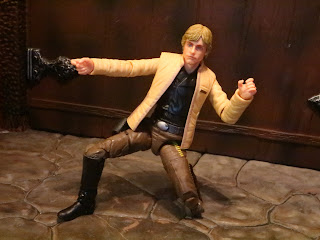 * The Black Series consistently has excellent articulation and Luke here is no exception. His holster might impede his right hip just a bit but it's nothing you can't work around. Hasbro has been on a role with this line since the release of Solo and they're just not letting up! 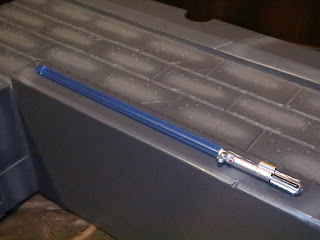 * Let's talk about the accessories, which is where this guy excels. Luke comes with Anakin's lightsaber, which nearly every Luke Skywalker figure has come with. It's still a cool accessory with a great hilt (there's a lot of painted detail) and a removable blade. 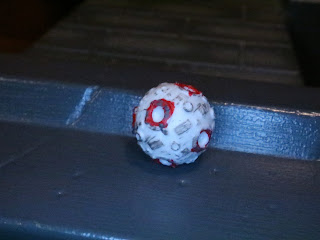 * Need something to practice with? How about a Marksman-H training remote? I believe this appeared in the fourth issue of the comic. Oh, and also, in A New Hope! How awesome to get a really nicely done training remote like this right? It looks really slick. I love the paint apps on it. It's tiny, so be careful with it! 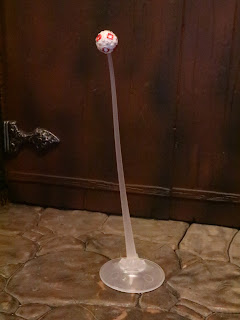 * It really hovers, too! Well, not really, really. It actually has a clear plastic flight stand that it plugs onto. The stand has two pieces and the base is balljointed, allowing you to pose the remote in different flying positions. 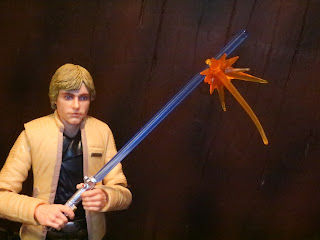 * To further sell the awesomeness of the training remote, Luke comes with a deflection effect for his lightsaber. this reminds me so much of the energy and Force effects that came with the Episode II toys, which I loved. This slides over the blade easily and looks fantastic. The upcoming Count Dooku also comes with something similar (his is a "motion blur" for his blade), so it's nice to see Hasbro constantly improving the line and adding new features. 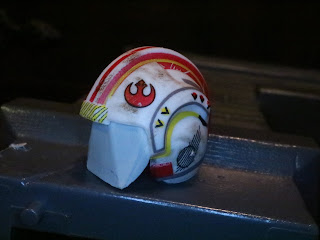 * To practice using his Force senses, Luke comes with a helmet with the blast shield down. This isn't the same helmet that he uses aboard the Millennium Falcon in A New Hope, though. This is his pilot helmet from the comics. It's a marvelous accessory with some fantastic paint applications. The printing on this is just fantastic. Very neat and clean. 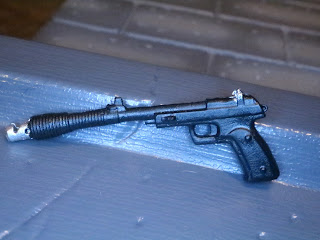 * I've always loved the look of Luke's outfit in this series of publicity stills (I'd love another variant of this figure without the jacket). In these, you can see Luke is carrying a Defender sporting blaster, just like Princess Leia. Luke's is just a little different than Leia's, though. This is the only accessory this figure shares with the Yavin Ceremony version of the figure, by the way. Everything else is unique to this release. 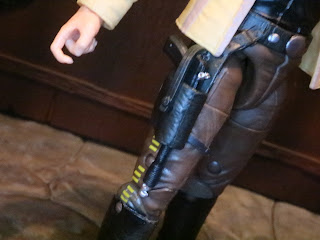 * Luke has his holster and the Defender blaster fits snugly inside, allowing the strap to close with ease. Brilliant! 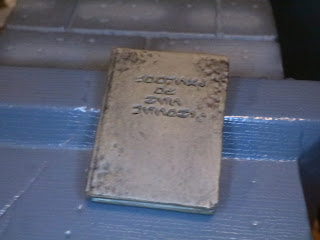 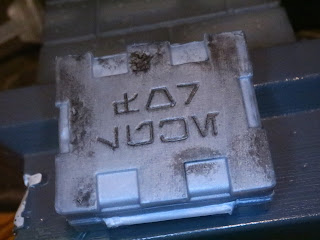 * The journal was stored in a case with the words "For Luke" on the top, so Hasbro included that here, too. The case opens and the journal can be stored inside. 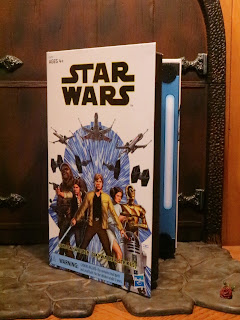 * The packaging on this set is really cool and different from most other Black Series releases. Not only does it look like the cover of the trade paperback of Star Wars Vol. 1 but it also opens in the middle, like a book, displaying Luke and his accessories. Once Luke is removed from the plastic ties holding him in place he won't really fit back in securely, but the accessories do pretty well. This reminds me of the Galoob Micro Machines sets based on the Expanded Universe novels, so this definitely gets some points from me. I'd love to see Hasbro release a few more of these. Leia next, please! 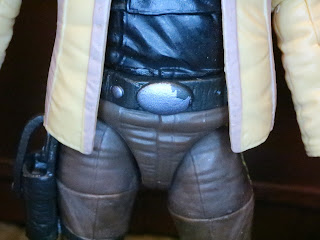 * Luke's belt buckle is really scuffed. This isn't a "worn universe" thing, either. It's just a quality control error. 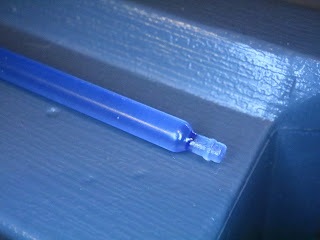 * The lightsaber pegs are still far too fragile. Seriously, Hasbro needs to go back to just giving us a hilt and an ignited saber. 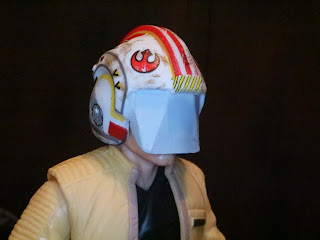 * I love the look of the helmet but the fit is tight. So tight that you can actually see the outline of Luke's nose protruding through the front of the blast shield. That doesn't seem accurate to me! 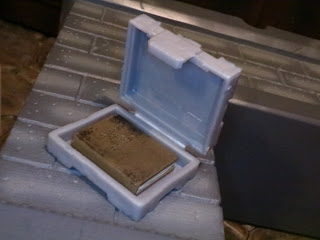 * I love the journal and the storage box but I'm disappointed that the storage box doesn't have an actual hinge. The plastic hinge just bends, and you can already see stress marks. A regular hinge would have been preferable. 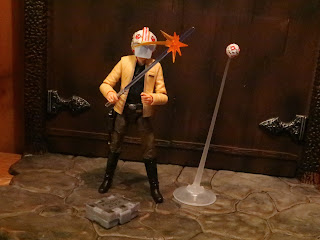 I definitely had a few nitpicks, but I'd be lying if I didn't say that this is one of the most exciting Star Wars releases for me yet. I love this Epic figure. It's one of my favorite looks for Luke and it comes loaded with extras. What's not to like? This guy was originally on sale at Hasbro Pule for $30 bucks but he's been showing up at GameStop for a bit more. Shop around a bit and you should hopefully find a deal, This is like getting a solid figure and an accessory pack. Heck, I'd love to see Hasbro release a deluxe sub-line of figures with more accessories like this. Comic characters, video game based characters, and certain movie characters would all really benefit from this approach.

I've reviewed so many Luke Skywalker figures that Luke now has his own review archive. Check out Tosche Station for all things Luke Skywalker!