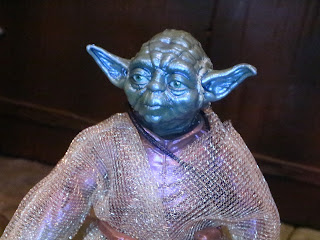 Near the end of 2017, just prior to the release of The Last Jedi, Walgreens offered up an exclusive action figure of Obi-Wan Kenobi as a Force Spirit. This year, prior to the release of The Rise of Skywalker, Walmart offered up an exclusive version of Yoda as a Force Spirit. I wonder when we'll get Anakin? This version of Yoda is based on the Phase II figure with new paint applications and new robes. Hasbro has attempted many different ways of creating Force Spirit figures but as far as I can recall, the only version of Yoda they've attempted was the translucent version from 1998. This guy definitely shows a lot more effort at creating the ghostly appearance seen in the Original Trilogy. Let's check out Force Spirit Yoda after the break and see how he turned out! 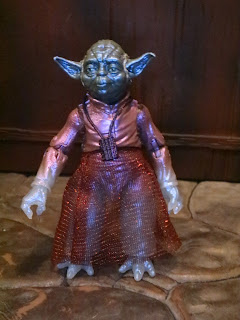 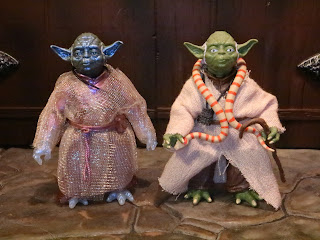 *On the left is the the Force Spirit version of Yoda while the original Phase II version is on the right. Oddly enough, I never reviewed the Phase II version. I might have to rectify that some day. This guy is mostly a repaint although the robes are different and Force Spirit doesn't come with the snake and lightsaber that the original release had. 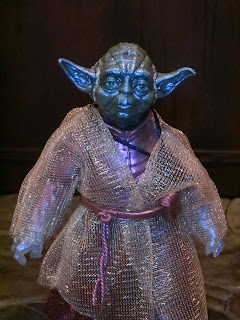 * You can debate whether or not Hasbro did a good job at capturing the appearance of a Force Spirit from Return of the Jedi, but they definitely did put together a very cool, very unqiue looking figure. Rather than just being molded in translucent plastic, Yoda has multiple colors and lots of metallic paint hues over the translucent appendages, which gives him a luminous quality. There have been a lot of jokes made that Yoda looks kind of like Yogurt from Spaceballs, which actually is spot on. That's not a bad thing though, right? Gosh, I'd love for someone to make Spaceballs toys someday. I know Mel Brooks made a deal with Uncle George back in the day, but Uncle George isn't in charge anymore, so.... 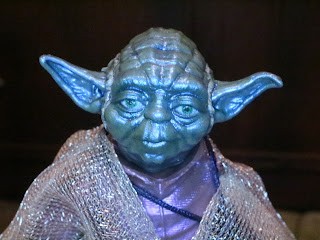 * The headsculpt is fantastic. It's the same as the Phase II Yoda but it uses the faceprinting technology seen on the Archives Yoda. It's pretty solid, right? In the Walmart computers this Yoda was listed as an Episode VIII version, which could make sense, too, although it definitely feels more Episode VI based. 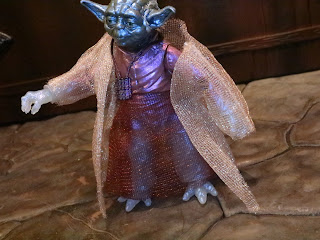 * The original Black Series Yoda only had one robe, but this one has two robes: An outer cloak and a nonremovable inner robe around his waist. Both are translucent and a bit shimmery, which really adds to the spectral appearance of the figure. It definitely shows that Hasbro put in some extra effort here rather than just making a quick repaint, which is always appreciated. 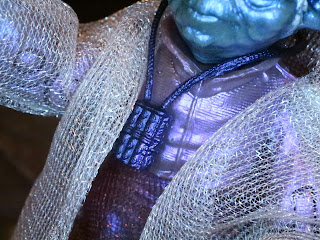 * The flute around Yoda's neck is actually called a blissl and it's part of the outfit Yoda wears on Dagobah. It's tough to get it over Yoda's head without damaging it but you can remove Yoda's head (it uses a traditional balljoint since it's one of the older figures in the line) to take it off if you want to. It's a cool little extra that looks just fine here. 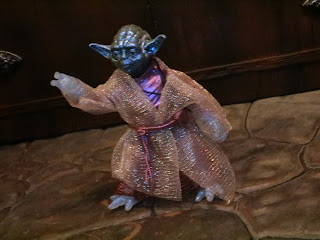 * While Yoda has far less articulation than most other figures in the line, for his size he's well articulated, particularly his double hinged elbows. Most of the figures with cloth robes have had double hinged elbows to help aid their movement and it works great here. Yoda can take some great poses, although as a Force Spirit he mostly stands around, cackles, and calls down lightning. 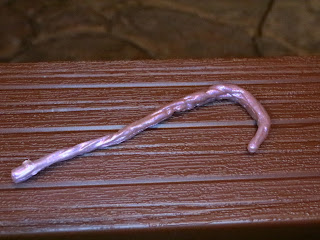 * Yoda comes with his gimer stick, gifted to him by the Wookies, although this time it's cast in a pearlescent purplish plastic to give it an ethereal look. 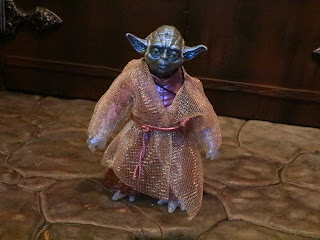 * This is a carry over from the original figure, but Yoda is way too large. Yoda is only supposed to be 2ft 2in, so in 1/12th scale he'd be a little under 2 1/4ths inches. Generally the scale has been good on the Black Series (except for the R2 units), but Yoda definitely is a bit too large. It doesn't look bad, until you rally start to think about it and try to put him on Luke's back or something. 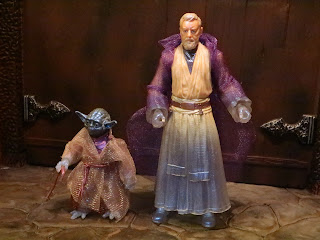 * How do you think Yoda looks compared to Obi-Wan? Not terrible although he seems to be designed fairly differently, doesn't he? The colors and design are good but it's inconsistent with what Hasbro has done before. When I look at Yoda I think more "holographic projection" and less "Force Spirit." 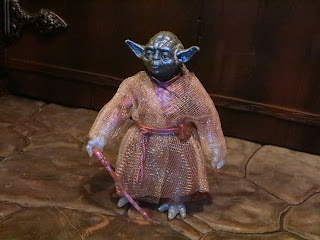 Yoda (Force Spirit) isn't a bad figure, though he might be a bit underwhelming. I'd give him a Good and a 1/2. Yoda comes with fewer accessories than the standard release, too, which disappoints. How cool would it have been if he came with some of the Jedi texts from The Last Jedi? Or his cooking kettle? Seriously, something! Being that this is an Original Trilogy variant of one of the most popular characters in the Star Wars galaxy, there's definitely an audience waiting to scoop this guy up. Now, the question is when will we get Anakin and if we'll get Hayden Christensen, Sebastian Shaw, or both! Hopefully sooner rather than later, right?


Do you seek Yoda? If so, check out the Hero Mashers version, the Micro Machines Classic Characters (2nd edition) Yoda, and the green hologram Yoda from the Micro Force advent calendar.