Action Figure Review: Orko from Masters of the Universe Action Vinyls by The Loyal Subjects 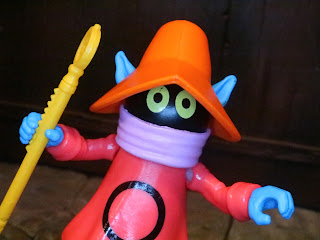 Merry Christmas! Who is going to be watching He-Man & She-Ra: A Christmas Special today? I can almost guarantee we will, as my 6 year old loves it. Orko plays a major role in the show as he travels to Earth and learns about Christmas. This Orko Action Vinyl isn't specifically from that special, but he certainly has that Filmation flair, doesn't he? Lately Walmart has been stocking cases of series 2 of these figures and I was fortunate to walk in one that had a fresh case. Orko is packaged 1/24, so one in every two cases, making him a little more difficult to find (I still have never seen King Randor nor Zodack and Zodac, who are both much rarer. Still, Orko was a huge want for me as I love the little guy. Let's see how Orko stacks up to the rest after the break... 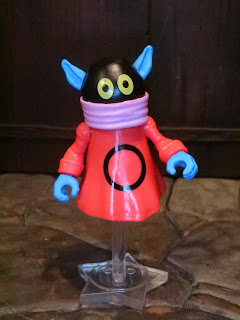 Height: 3 1/8ths inches from base to tip of hat 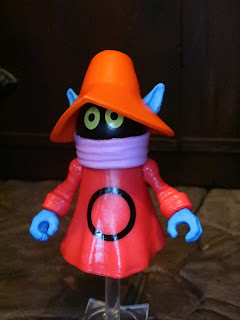 
* I love Orko, so any figure that captures his design well is going to be a winner for me. He's very bright and cheerful looking and nicely sized compared to the rest of the figures. The "O" on his shirt (which stands for "Oh, no! Orko's getting ready to do a magic trick! Someone warn Duncan!") is neatly painted on as well. Size wise, some folks might really like using him with their vintage figures as he looks like he's scale well with them based on the Filmation Orko's size. 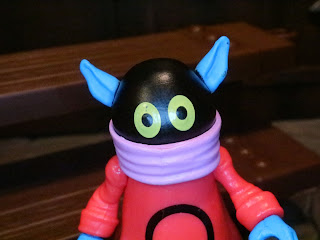 * Orko has a removable hat! I loved the removable hat on the vintage figure as a kid and I was thrilled that this one has a similar feature. You can't see Orko's face (just his bright yellow eyes) but his adorable blue ears are on full display. 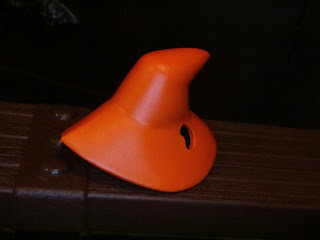 * Here's Orko's hat, by the way. It fits on nicely and reminds me so much of the vintage accessory. 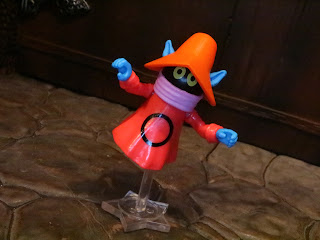 * Orko himself doesn't have a lot of articulation (his wrists, shoulders, and a balljointed head), but there's enough to have some fun with. It's his balljointed base that is the real winner. The base is permanently attached underneath his shirt and allows for Orko to "float" and be moved into any number of flying positions. It's really fun and very well executed. 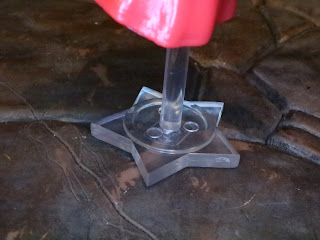 * The base is a removable piece at the bottom, so be careful not to lose it. It's shaped like a star, giving the base a bit of a magical vibe. 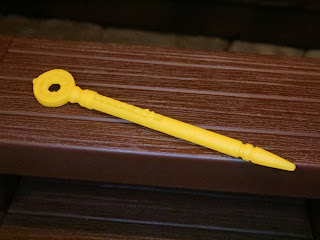 * Orko also comes with his staff, which looks very similar to his Masters of the Universe Classics staff. It's a cool little piece that slightly resembles the vintage Orko's ripcord that activated his action feature. Orko holds this like a champ. 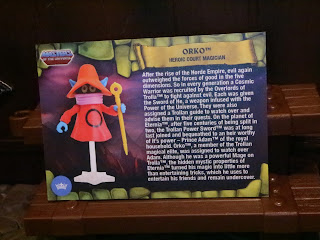 *  To add a bit more personalization and fun to each release The Loyal Subjects adds a bio card. It's a cool little extra that uses the MOTUC bio for Orko here. The back features a checklist for series 2, as well. 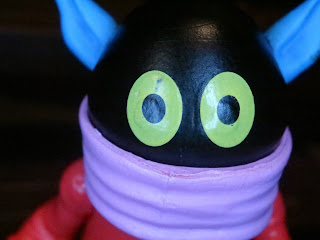 
* Orko's eyes have a few little spots where the yellow paint didn't fully stamp, leaving some visible black spots underneath. 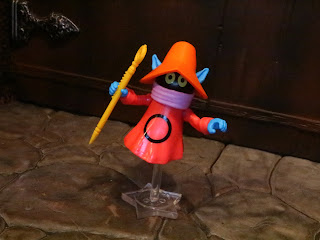 I'm thrilled to have finally found Orko and I'm actually very, very well pleased with him. He's adorable, his stand works great, and he has the cool removable hat feature. If you're a MOTU fan and haven't picked these up yet, Walmart has been carrying these pretty regularly, so check there. Orko is a Great and a 1/2 figure and a really nice version of the character. I'm really hoping that we hear about a third series of these coming soon as it would be great to see a series based around She-Ra and he Evil Horse. Plus, we're still missing fan favorites like Moss Man and Scareglow. Hopefully Mattel is still letting The Loyal Subjects use the MOTU license.

If you're an Orko fan I've also reviewed Super7's vintage styled Orko and Shadow Orko, the green Orko M.U.S.C.L.E. minifigure from the #1 Masters of the Universe set by Super7, the standard Orko ReAction figure, and the boxed ReAction Orko (Cartoon Colors).