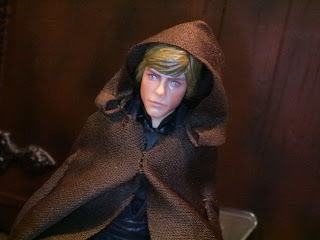 So... what did you think of The Rise of Skywalker? Don't worry, I'm not going to get into spoilers her; I'll simply say that I liked it, although it felt like it included two movies worth of content to make up for The Last Jedi. That's not why we're here today, though. We're really here to check out Hasbro's Luke Skywalker (Jedi Knight). Back in Phase II of he Black Series Hasbro released another figure of Luke Skywalker (Jedi Knight), but that figure was based on Luke's appearance during his encounter with Darth Vader and the Emperor during the end of Return of the Jedi. This version is based on Luke's appearance when he goes to rescue Han Solo from Jabba the Hutt. This has always been one of my favorite Luke Skywalker costumes (something I say about nearly every Luke Skywalker outfit, it seems) so it's nice to finally have it in the Black Series. Luke Skywalker is a Walmart exclusive and I've been seeing him fairly regularly, so hopefully you'll have good luck tracking him down, too. Let's check out Luke Skywalker after the break... 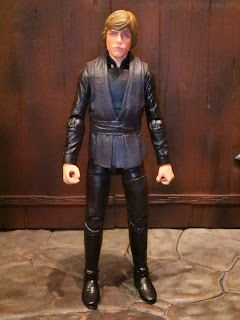 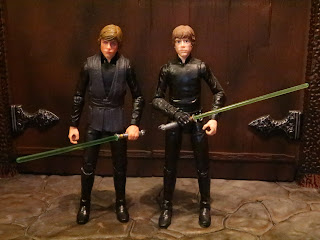 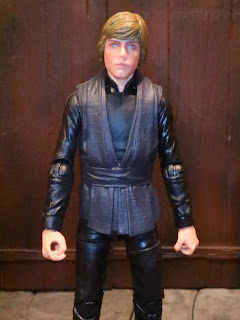 * Luke looks much improved here, especially due to the presence of the cool grayish tunic over his snazzy black outfit. I love this look. It's a simple outfit but it works. 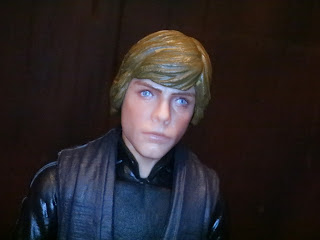 * The headsculpt is also really, really good. It might seem like Luke is wearing a little too much makeup but, in person, it's really quite impressive. So is the hair: This definitely looks like Luke's hair and the level of detail is excellent here. 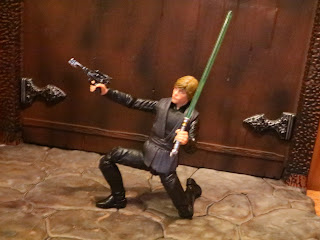 * The Black Series figures look great and still are excellent toys. While this figure has an older articulation scheme, it still feels durable and well made with no worry needed about breakage or anything. 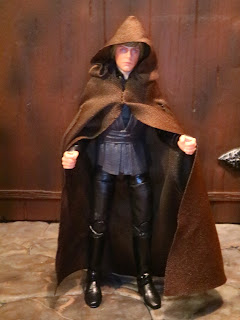 * Luke's cloak is excellent. It's made from a material that feels like it's of an excellent quality and it looks really good on Luke. The hood always requires a little work to get it in place but once you have it, it looks great. 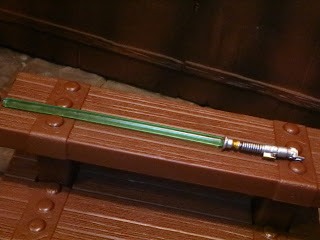 *  We received just the handle for Luke's lightsaber with R2-D2 back in 2013 so it's nice to finally have the version of Luke to pair with R2 and his hidden lightsaber! The blade is removable, so you can still have Luke run around with just his saber or you can have him in full blown Jabba's minions mincing mode. Your choice. The detail on the hilt is excellent with plenty of great paint applications. 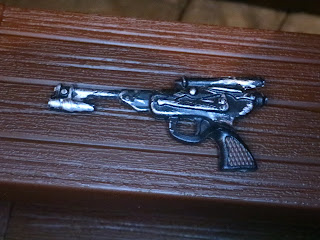 * Kanan Jarrus also came with a DL-18 but it's different from this version (which Luke swiped from a guard at Jabba's palace): This one has a wood grain handle and looks a bit more weathered and worn. I also wish Luke came with the bone he uses to fend off the Rancor, but this is a sweet inclusion that both the vintage Luke and the POTF 2 Luke came with. 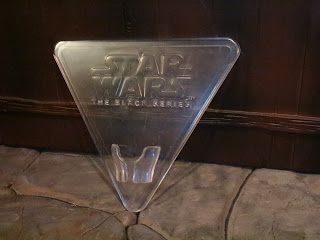 * Lastly, Luke comes with one of the translucent triangular stands that many of the exclusive figures have been coming with. It doesn't fit every figure well but it works with Luke as his boots slip right in. 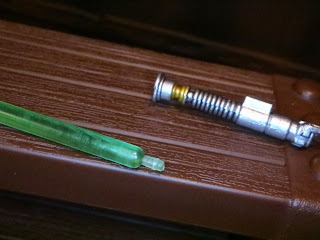 
* The lightsaber pegs are still far too fragile. Seriously, Hasbro needs to go back to just giving us a hilt and an ignited saber like some of The Vintage Collection released had. 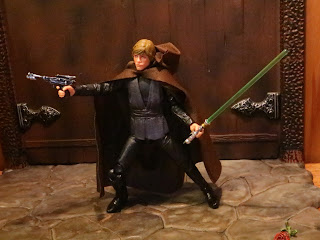 This version of Luke Skywalker (Jedi Knight) definitely blows the previous version out of the water. Yeah, I would have liked a bone for Luke to fight the Rancor, or maybe an alternate "blasted" right hand, but for a Jabba's Palace version of Luke Skywalker, this is excellent. Seriously, Luke is a Great and a 1/2 figure and is well worth picking up. Again, he is a Walmart exclusive, so you'll have to wade into that hive of scum and villainy to find one, but I've been seeing them quite regularly, so hopefully you'll have good luck, too. Now how about a new version of Leia as Jabba's Prisoner and Han Solo in Carbonite...

I've reviewed so many action figures of Luke Skywalker that he has his own review archive. Check out Tosche Station for all of my Luke Skywalker reviews!