Action Figure Review: Transforming He-Man from Masters of the Universe by Super7 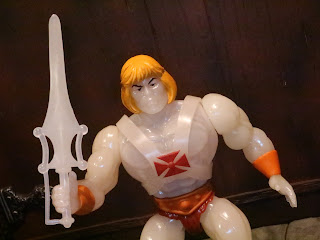 Well, this is it: The last figure in Super7's neo-vintage Masters of the Universe line. Due to the release of Mattel's upcoming Masters of the Universe Origins line it seems that Super7 is no longer able to keep releasing figures in the vintage style. Between their first releases in 2017 to the latest series inspired by the Filmation cartoons, Super7 did release quite a few figures. Still, there were so many more that fans wanted. Super7 did release quite a few He-Man variants and the last one out is Transforming He-Man. This glow in the dark figure is a simple "repaint" of the standard He-Man figure based on the transformation sequence from every episode of He-Man and the Masters of the Universe. It's an interesting concept, although I do think the execution is a bit lacking. Let's check out Transforming He-Man after the break... 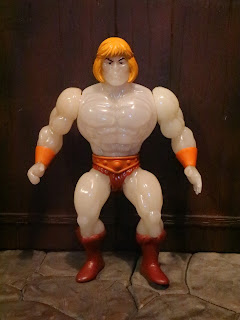 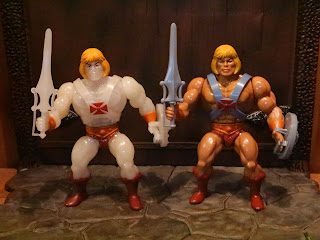 * On the left is Transforming He-Man while the standard Super7 He-Man is on the right. If you have that figure, Robot He-Man, or Gold Statue He-Man, you should know what to expect. 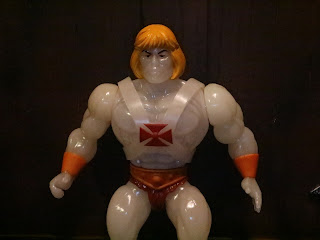 * We've seen this sculpt a few times now, but now He-Man is cast in glow in the dark plastic. It's a different look. The sculpt is still solid, and most of He-Man's costume is painted, although he does look a little odd by himself. Turn the lights off though... 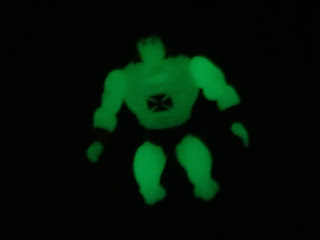 * And you've got a glowing He-Man! Again, I'm not sure that this makes me think at all of the transformation sequences from the cartoon but I rarely turn down a glow in the dark action figure. It makes me really wish Super7 had tackled Scareglow, though, just so most of us could have a vintage styled version of the character on the shelf. 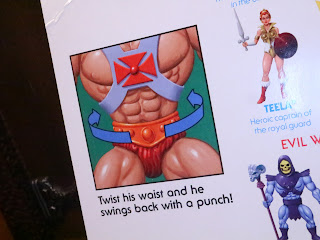 * Transforming He-Man also features a spring loaded swivel waist that works pretty well. He-Man can punch and swing his sword with just a turn of the waist. 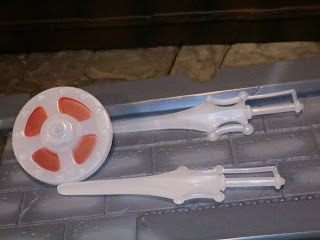 * He-Man comes with the same three weapons that the standard figure has: A standard Power Sword, a half Power Sword, and a shield. They also glow in the dark, so you can use them with this figure or mix them up with some other 5.5 inch MOTU figures for customs. 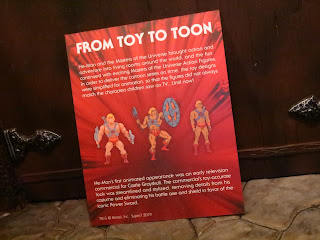 *  I really am quite fond of the art cards included with these figures. They kind of mimic the look of the minicomics in the vintage packaging but they're a simple cardstock art print. On the front is a really cool image of He-Man from Emiliano Santalucia while the back features an image of the Filmation model of the character and some text. 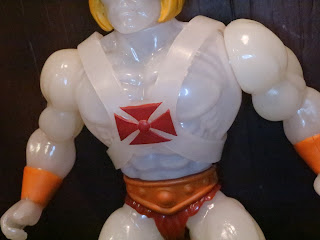 
* I'm not sure why Super7 molded He-Man's power harness in glow in the dark paint. Shouldn't it have been painted like the rest of the elements of his costume? 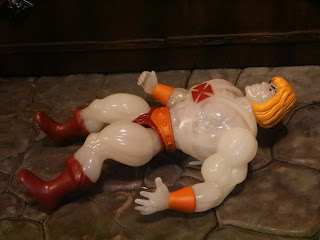 * Like some of the earlier figures in the series, He-Man's hips don't work perfectly and he tends to topple over rather easily. Super7 seemed to get this under control for some of series 2 and most of Series 3 and 4, but the problem reoccurs here. 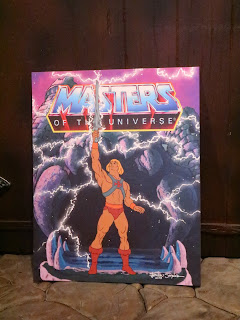 *  I wish Super7 would have given us some different art for this variant. I know they're trying to get some more mileage out of molds, especially now that Mattel is putting a hold on this line so that it doesn't effect the sales of the Masters of the Universe Origins toys next year, but c'mon! A little extra effort would have been nice! 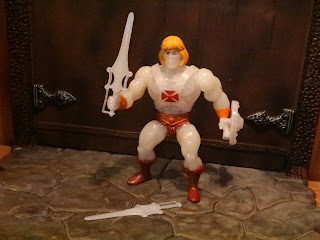 Trying to recreate the transformation sequence was an interesting idea although I don't think Super7 accomplished the goal. There's nothing about the figure that makes me think of He-Man transforming. I simply get the vibe of a glow in the dark He-Man, which doesn't sound nearly as catchy. This is a Good figure, although I imagine most folks could skip it unless you really like glow in the dark stuff or you're trying to collect the whole line. I would love to have another series of these, particularly with Adora, Scorpia, Ram Man, Madame Razz, the Sorceress, and Cringer, but for now we'll just have to wait for Masters of the Universe Origins next fall.

Prince Adam/ He-Man is one of my favorite characters and I've reviewed so many figures based on him that he has his own review archive. For all of my He-Man reviews, check out Fabulous Secret Powers!