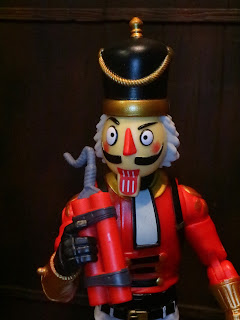 We're so, so close to Christmas, so how about a Christmas themed action figure review from one of my favorite toylines of 2019? Today I'm checking out Crackshot from Jazwares' excellent Fortnite: Legendary Series line. I believe that Crackshot is a Walmart exclusive, so check your nearest Walmart as he seems to be rather plentiful. I've seen plenty in stores over the past few weeks although I ordered mine site to store and picked him up a few weeks back. Crackshot is a costume from Fortnite that is modeled after a traditional decorative nutcracker and was available for purchase in the Item Shop in December 2017 and December 2018. Fortnite sure has some crazy designs, don't they? I love the randomness of the sources of inspiration for the character designs. Let's check out this cool nutcracker themed figure after the break... 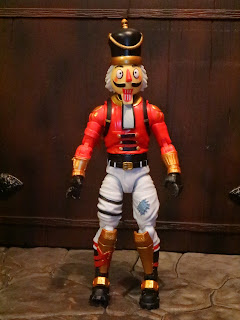 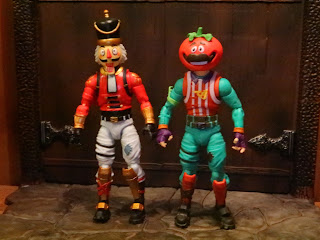 *While it may not be apparent at first, Crackshot does reuse some parts from previous figures. He has the same lower body as a few other figures, including Tomatohead (on the right), as well as the same biceps, lower right arm, and hands. There are quite a few new pieces here, too, and the paintwork does a pretty good job of making the reuse barely noticeable. Plus, I believe the reused body elements are accurate to the game. 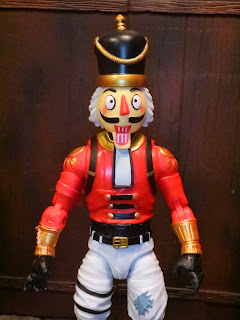 * All of the Fortnite figures have been fun, colorful, and over the top, and Crackshot fits in well with everyone else. Since he's dressed like a decorative nutcracker, his outfit is modeled after an old-timey soldier complete epaulets, a buckled coat, and a tall hat. The paintwork is neat and clean, and the red really helps Crackshot stand out from all of the figures releases so far. 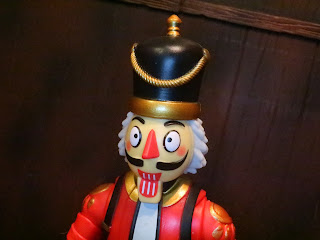 * I love the big, googly eyes on Crackshot. He definitely looks like a toy of yesteryear come to life. The hat isn't removable but the faceplates are, so you just pull them off to swap them out. You might say that this one is Crackshot's standard happy face. The eyebrows are more level here compared to the second expression... 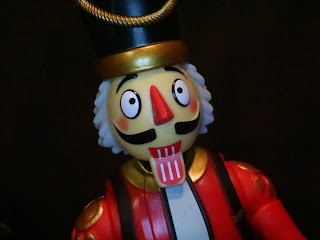 * Which looks a bit more surprised, right? The only difference I can really tell between this and the first faceplate is the position of the eyebrows. The paintwork on all of these faces are pretty nice, particularly the rosy cheeks and the way the teeth are painted on the mouth. I'm guessing the white stripe on the center of his shirt is supposed to represent a beard, correct? 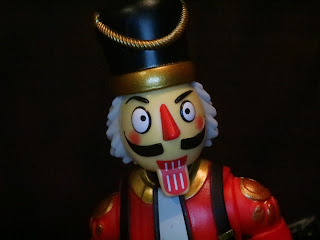 * The third faceplate is my favorite of the three, as it features a very, very wacky looking expression. With the eyebrows at different angles and the eyes at different sizes, Crackshot looks crazy! I love it! 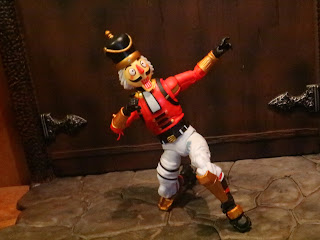 * The articulation on these guys have all been incredible so far, and Crackshot is no exception. He feels sturdy, durable, and has articulation that feels like it could give Toy Biz's Marvel Legends line a run for its money. The inclusion of things like toe joints, lots of swivel hinges, double hinged elbows and knees, and butterfly pecs allow this guy to take some crazy poses and uses two-handed weapons with ease. 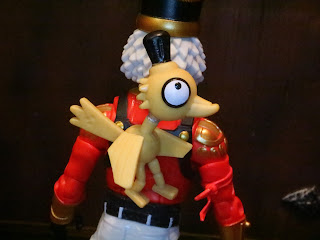 * Crackshot's "Back Bling" is called the Birdshot and it looks like an old time wooden toy bird. It's really odd but, at the same time, really cool. Crackshot and Birdshot have similar eyes and hats, so maybe they're partners. I guess Birdshot is the sidekick, right? 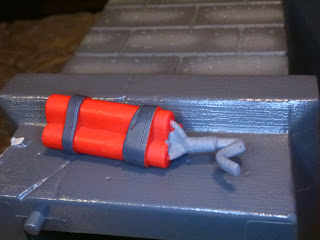 * I love this little pack of dynamite. I don't know why, but dynamite is always a cool accessory to get with toys. Remember the dynamite that came with Powderkeg from C.O.P.S.?  Yeah, that was really cool. This one is, too. I love the design and the colors. It's simple but it works really well. 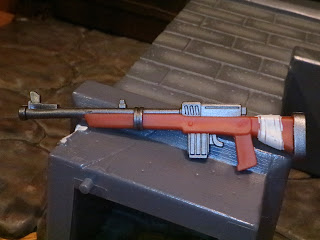 * Like Tomatohead, Crackshot comes with the Bolt Action Rifle, one of the standard sniper rifle type weapons in the game. This is a really cool looking rifle with a wrapped stock, gunmetal gray mechanics, and a wood body. I love the look of this one and it fits Crackshot's toy soldier/ nutcracker theme. 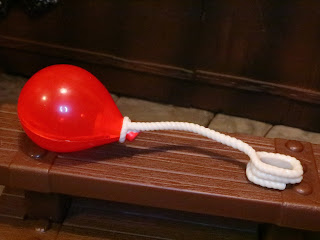 * Like Abstrakt, Crackshot comes with a balloon. Yup! A balloon. Apparently these are an in-game item that the character can use to help negate falling damage and, with enough balloons, even float. While the balloons aren't as realistic and intricate as the balloons NECA used on their various Pennywise figures, they fit the aesthetic of this line really well. Jazwares includes some seriously fun accessories here. It's always cool to get stuff like this from a video game! 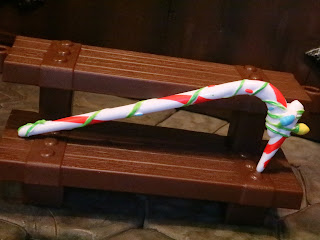 * Crackshot's Harvesting Tool is called the Merry Mint Axe, and it's an oversized candy cane wrapped in Christmas lights. It's not as detailed as some of the other items but it's a fun accessory that goes along with Crackshot's Christmas theme. 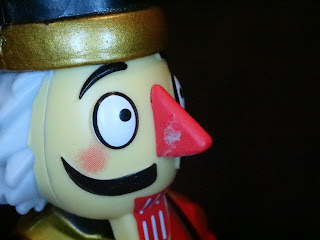 
* One of Crackshot's heads had some weird, excess glue on the side of his nose. What gives? Need a tissue, Crackshot? 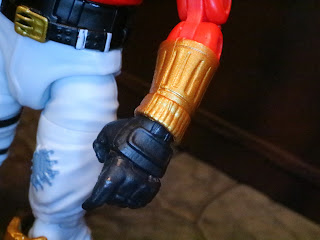 *  My biggest complaint with this line is still Jazwares went with hinged fingers. The fingers move with one hinge and while they're not as problematic as the fingers on older Marvel Legends figures, I still don't like them as well as the use of alternate hands. They have a fairly tight grip, but sometimes they're still tough to use, especially with Harvesting Tools. 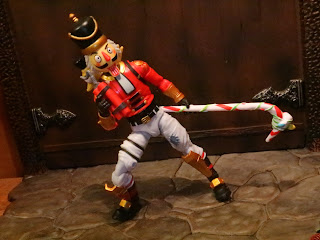 Crackshot is another Epic figure in this line. He's fun, festive, and festooned with details. Seriously, the Fortnite: Legendary Series is one of the best action figure lines of 2019 and Jazwares keeps putting put more cool stuff. I don't have any yet but the series three figures are hitting Target and Walmart stores right now. This line is a shoe-in for a place in my best toylines of 2019 list that will come out in January or February, so if you're looking for some last minute toys for someone who loves action figures or Fortnite, head out and pick some of these up.