Action Figure Review: Stratos from Masters of the Universe by Super7 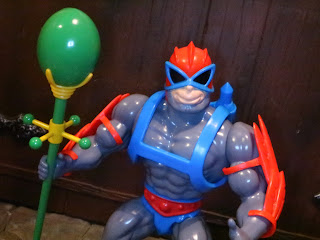 I'm almost finished with my reviews of series 4 of Super7's neo-vintage Masters of the Universe line and, sadly, it doesn't seem there will be a series 5 (for the time being, anyways). Super7 is having to out the brakes on things do to the upcoming Masters of the Universe Origins line from Mattel. Now don't get me wrong, I'm very excited for MOTU Origins, but I really like what Super7 has been doing with these Filmation inspired vintage styled figures. Things started off a bit rough, particularly with the He-Man/ Skeletor/ She-Ra/ Hordak series, but Super7 has really improved these. Interestingly, when I first received this set in the mail Stratos was kind of a treat as I had never owned a vintage Stratos. Between getting this figure in the mail and writing this review I did manage to find a vintage Stratos at Retro-Toy Con in Greenville, SC (I also met Pixel Dan there, too). Stratos has never been one of my favorites. I guess it's possible it's simply because I never owned him as a kid, but I tend to think that he's less interesting because he doesn't have a unique weapon of his own. Fortunately, Super7 fixed this by giving him two accessories he can interact with so he's not just standing around with empty hands. Let's check Stratos out a bit more closely after the break... 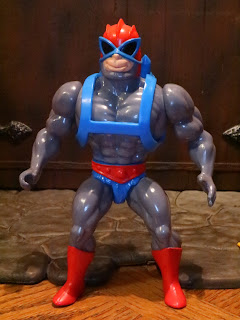 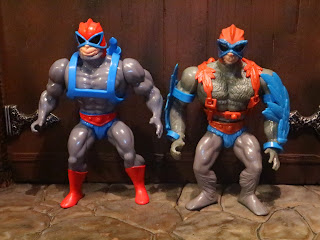 *On the left is Super7's Stratos based on the Filmation design while the vintage Stratos is on the right. This is the blue wing/ red jetpack version, which is probably the less popular of the vintage variant Stratos figures. While the vintage has the hair body and arms of Beast Man, Super7's Filmation inspired figure uses the standard sleek body. 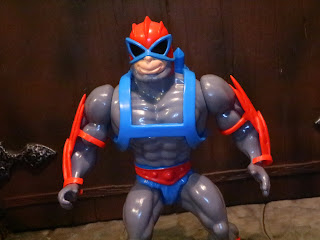 * While he's never been one of my favorites (though I do really like him in the 200x/ MYP cartoon), Stratos does have a very classic MOTU look to him. His bold primary colors and simple yet fantasy influenced design definitely make him stand out. Super7 did a nice job of capturing his cartoon appearance here for sure. 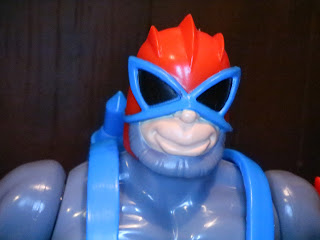 * The Filmation Stratos has a larger head and a very simian appearance, even more so than the vintage toy. It's not the best look in my opinion, but it is very faithful to the Filmation cartoon. While the earlier figures in the line were a bit weak, the later series have had some excellent headsculpts. 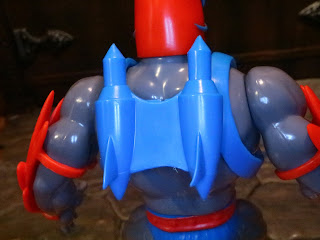 * Stratos has his trusty jet pack, which I assume makes up for his puny wings. The jetpack isn't removable, though. It's also quite simple, more so than the vintage toy's pack, but it does capture the Filmation aesthetic. 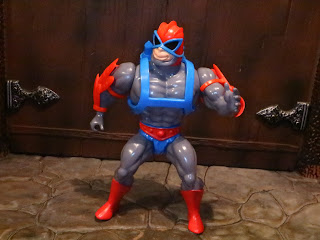 * Stratos moves just like the other figures in the line and feels quite a bit like a vintage figure (well, build-wise, although the plastic is different). He still has the swivel/hinge hips of this line rather than the elastic bands of the vintage toys, but it works. If you liked the vintage toys you'll like this I should think. 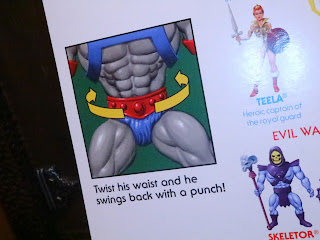 * All of Super7's neo-vintage figures feature spring loaded swivel waists. It's fun to have a genuine action feature in a MOTU figure again, allowing Stratos to punch and flap his foes with just a turn of the waist. 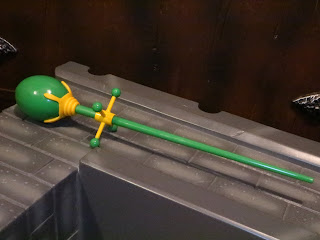 * The highlight of this set are Stratos' two accessories. First up is the Emerald Staff of Avion, an accessory from the minicomic The Siege of Avion. In the minicomic, the Emerald Staff of Avion is what gives Stratos' people the ability to fly. In Masters of the Universe Classics Goat Man came with this accessory, but it goes much better with Stratos. It looks pretty nice, doesn't it? I love the large green egg-like orb on top. 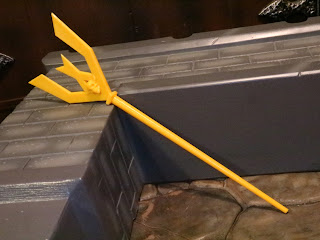 * The second staff is just the Staff of Avion (no emerald) and it is actually from the Filmation series where it is depicted as a sacred relic of the Avion people. It looks just like it's Filmation counterpart and is probably the better choice for this figure when on display. In MOTUC, Icer came with the staff, so it's nice to have a MOTU line where Stratos finally gets it. 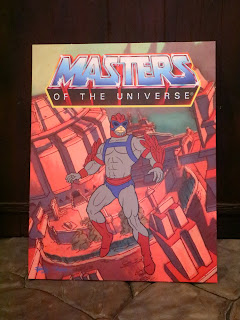 *  One of the things I really enjoy about this line are the art cards included with each figure. They kind of mimic the look of the minicomics in the vintage packaging but they're a simple cardstock art print. On the front is a picture of Stratos from Emiliano Santalucia while the back features three images of the character from toy to concept to cartoon star. 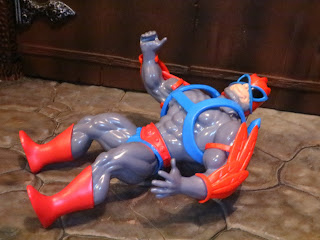 * Maybe it's because of the jetpack, but Stratos tends tip over backwards. That's no fun, is it? Fortunately, posing him with a staff does help keep him balanced. 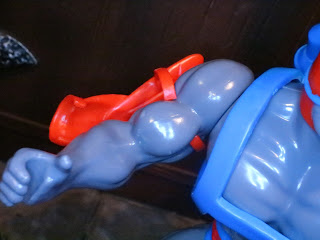 * The wings on this guy are easier to put on than the wings of the vintage figure, but they're kind of flimsy and fall off rather easily. That's a drag, although apparently he doesn't really need them to fly thanks to the Emerald Staff of Avion. 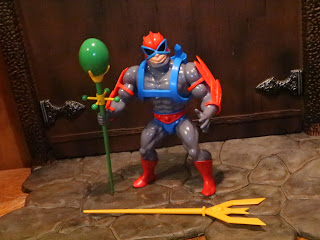 While he's got some flaws, Stratos did turn out to be a pretty cool figure with some great accessories. Seriously the staves he comes with are fantastic and would make great complements to a vintage MOTU line on their own. I'm definitely beginning to appreciate Stratos more now than I did in the past. While he's still a bit dull in my eyes, he still is rather unusual, which is always a plus in the world of Masters of the Universe. Heck, I think being unusual is a prerequisite. This is a Great figure that should make fans of Stratos and Super7's neo-vintage line quite happy.


If you're a Stratos fan then check out my review of the M.U.S.C.L.E. green Stratos from series #2 and the minifigure Stratos from the 200x Heroes Vs. Villains Gift Pack #1.