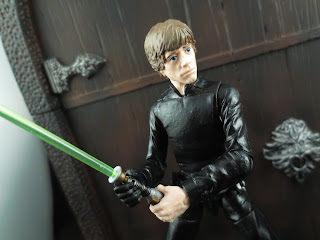 Recently I made a trade over on The Fwoosh and picked up some Star Wars: The Black Series figures I was missing from the collection and today I'm looking at one of the figures I received: Luke Skywalker! Representing Luke in his all black Jedi duds which he wears during the last third of Return of the Jedi as he duels Darth Vader in the Emperor's throne room aboard the second Death Star, this is the first version of Luke we've received in the line from that film. Luke has two very different Jedi outfits during ROTJ and I imagine we'll see the outfit he wears to Jabba's Palace at some point in the future. Of course, there's also his Endor poncho, which he wears over this outfit. I don't know what it is but for the Original Trilogy characters I always feel like I need to own each and every variation of those characters. The costumes are always just too cool. Ready for a closer look at Luke Skywalker as he heads off to redeem his father? Then join me after the break... 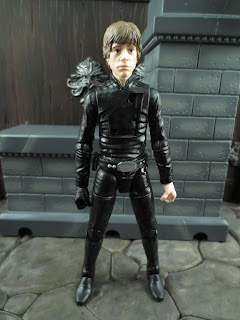 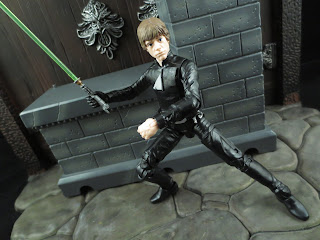 * One of the things that I can always say positive about the Black Series is that they always feel like toys first. I mean that as a complement, as I feel like that me and my little one could play with these (sans accessories) and not have to worry about breakage or anything. They feel nice and durable. Of course, Luke also has some fantastic articulation and moves nicely. Heck, he can even take some pretty decent two-handed lightsaber swinging poses, too. 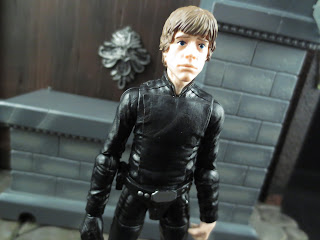 * Overall I like the look of this figure. It's mostly molded in black plastic, so there isn't a lot of color, but that's pretty true to the spirit of the outfit. Hasbro has nicely captured Mark Hamill's slim build from the film here, something that I still find noteworthy having grown up with the bulked up Power of the Force 2 figures. Hasbro again did a nice job with the proportions here. 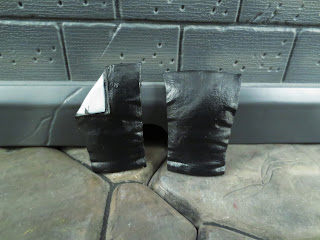 * One of the variations on Luke's costume here is that one of the corners of the front of his shirt can be somewhat open, giving him a different appearance. Rather than release two figures, Hasbro decided to give Luke two interchangeable front for his shirt: One with the flap down and one nice and neat. This feature works incredibly well and actually even adds a nice extra level of depth to the sculpt as it makes the flap truly look like an extra piece of material rather than just a sculpted detail. 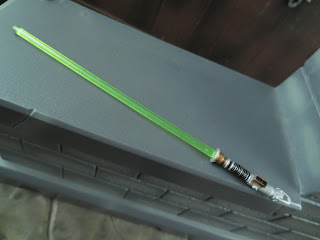 * While we received just the handle for Luke's lightsaber with R2-D2 back in 2013, this is the first time we've got the entire deal. It looks awesome! The blade is removable, so you can still have Luke run around with just his saber (which hooks onto his belt) or you can have him in full blown Vader dueling mode. Your choice. The detail on the hilt is insane, though, and looks pretty nice. Lots of great paintwork, too. 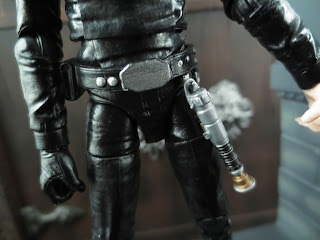 * Luke's lightsaber can easily fit onto the clip on the left side of his belt, something I much prefer to the peg system that other figures have used. Luke's belt looks pretty good too, and Hasbro wisely chose to make it a separate piece. It's an additional, non-removable piece that floats over Luke's waist. Luke's Jedi outfit is pretty basic in design but he does have a small pouch on the right side and a couple of small clips and things on the left. 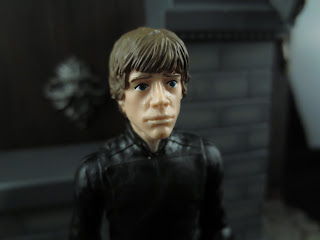 
* Does Luke look a bit sad to you? This isn't a terrible headsculpt but the expression just looks off. I hope when we get an Endor Luke or a Jabba's Palace Luke, Hasbro gives us a better portrait as I'm just not feeling this one. 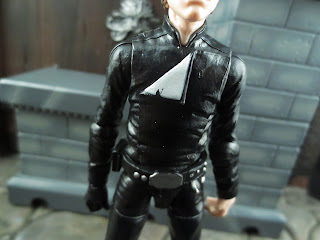 * Oh no, Luke! When you stand too close to the Dark Side it tends to bleed over onto your clothes! Oh, wait, that's some sloppy paint. Yup, the gray flap of Luke's shirt has a little bit of errant paint there. As my two year old is fond of saying about anything and everything out of order: "Messy!" 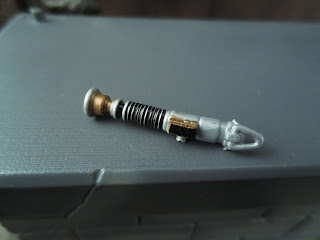 * I don't know what it is, but Luke's lightsaber handle feels a little bit rubbery. I kind of wish that Hasbro would just give the figures a lit saber and a handle rather than doing the whole removable blade thing, as it would make these feel much sturdier.

*Also, this version of Luke really needed to come with a set of binders. It's the only other thing he interacts with while wearing this outfit in the movie and it would have added a lot to the figure. 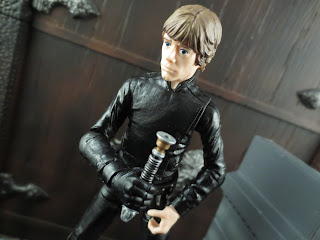 Luke is a good figure, but he's not great. I know he's an older figure and that the Black Series has improved in many ways in the year to 18 months since his release, but he's still very representative of much of what Hasbro has done with this line: Just good enough. A better headsculpt and a pair of binders would have been really ideal here. I look at how Hasbro keeps doing better things with Marvel Legends right now and wish that Star Wars were getting that same kind of attention from Hasbro. As it stands, Luke here is a Good and a 1/2 figure. He's cool and definitely a significant characters, but he could have been so much better!