Road to The Rise of Skywalker: Clone Commander Obi-Wan Kenobi from Star Wars: The Black Series Phse III by Hasbro 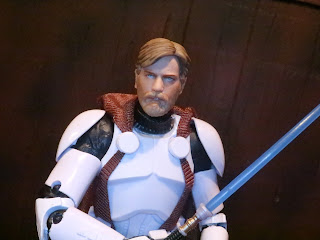 I've been checking out plenty of the new Star Wars: The Black Series releases in anticipation of The Rise of Skywalker since October but, thus far, I haven't reviewed a single figure from the upcoming film. I've got some coming, don't worry, but the product Hasbro has released from Jedi: Fallen Order, The Mandalorian, the Original Trilogy has been more interesting lately. Now Hasbro is even mining the 2003 Clone Wars series for inspiration (that's different from The Clone Wars, kids!). Today I'm checking out the very cool Walgreens exclusive Clone Commander Obi-Wan Kenobi. Walgreens has offered many cool exclusive Black Series figures over the past few years and this version of Obi-Wan Kenobi is one of the coolest. Combining the Jedi with the Clone Trooper armor was always a win in the coolness department and Obi-Wan just looks awesome in this outfit. Let's check him out after the break... 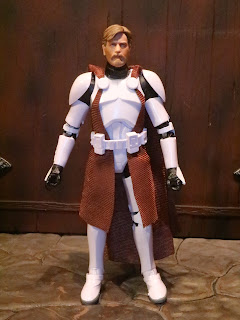 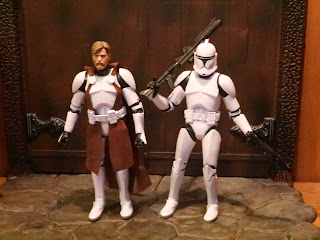 * On the left is Clone Commander Obi-Wan Kenobi while a standard Clone Trooper is on the right. Obi-Wan has a different torso and belt from any of the Clone Troopers, but the limbs are the same as on most other clones. There are definitely parts of the Clone Trooper sculpt showing their age (such as the range of motion on the elbows and knees) but it's still not a bad base body and I'm OK with some consistency. 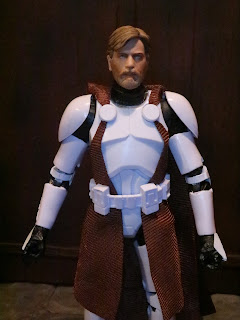 
* This is really just a cool looking figure. I'm pretty sure that the Phase I Obi-Wan from Revenge of the Sith is the worst figure released in the Black Series to date, so it's nice to see an improved Obi-Wan from that era. His armor looks great and the presence of the robe-like cape on the armor just adds to the impressiveness. The belt is all new and the torso seems all new, too, as there are some discs on the chest to hold the cape/ robe in place. The paint work is neat and clean, and Obi-Wan is rocking the Clone Trooper armor like the champ he is. 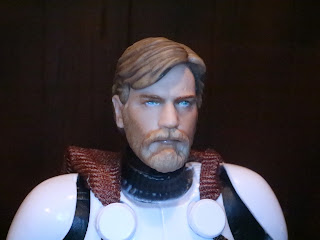 * The headsculpt is excellent. This is hands down the best likeness of Ewan McGregor in this line and it makes excellent use of the photo printing technology to give us an extremely life-like portrait. His hair and beard look incredible. Hasbro has done a nice job of giving the Star Wars figures a unified, realistic style, so even someone who appeared in a comic or someone who appeared in a cartoon, like Obi-Wan here, fits in with your standard movie characters.

The head is easily removable, though the balljoint is larger than on the Phase I Obi-Wan body, just FYI. 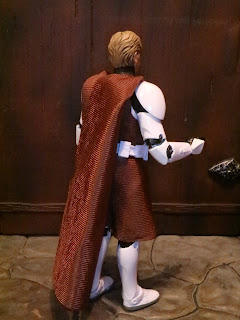 * The soft goods cloak looks great and is nicely attached to the body. It hangs down the front, attached via the chest anchors and the belt keeps it in line from the front and the back. The cape has a bit of an uneven look to it, which is part of the style. It's kind of flipped in the middle. It's hard to explain, so take a look in the picture. It gives it a dynamic feel that I really like. 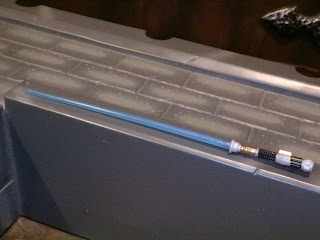 * Obi-Wan's lightsaber is the same sculpt as the Phase 1 ROTS Obi-Wan's although the paintwork is a little different. It splits apart much easier than the current lightsabers and has a slightly more tapered blade. 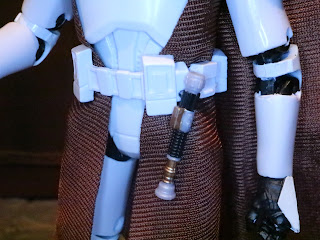 * Obi-Wan's belt is bit different from the previous Clone Trooper belts. It also has a spot for him to hold his lightsaber hilt. It's a bit loose, so be careful moving him when you've got the lightsaber hanging from his belt. You don't want him to lose his lightsaber! 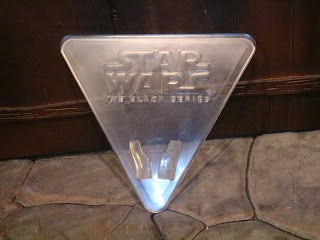 * A lot of the exclusive figures have been coming with these translucent stands. They're not the best stands in the world (why not just use foot pegs?) but I'm not going to knock an extra, either. They haven't fit every figure terribly well but it works quite nicely with Obi-Wan, as the Clone Trooper boots are narrower than many others. 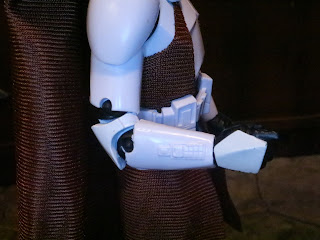 * Being based on an older figure, Obi-Wan does have two problems due to the Clone Trooper sculpt which is now five years old. First, the double hinged elbows have less range of motion than Hasbro's current single hinged elbows. Not great for a Jedi, as you can see.

* Obi-Wan also uses the older Clone Trooper pauldrons which impede shoulder movement. They've had some that work better, so why not use those? 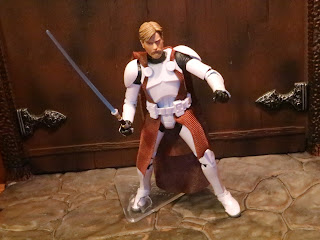 While there are some articulation issues leftover from the Clone Trooper body, overall Obi-Wan is definitely a very, very cool looking figure. While there are so, so many characters that need to be made in the Black Series, I'm all about these more unusual releases, too. I mean, mining the 2003 Clone Wars series? Brilliant! This has always been a great design and it's nice to have another Obi-Wan on the shelf. He's a Great figure that gives me hope Hasbro will soon release a definitive ROTS Obi-Wan Kenobi in the future. That entire figure needs a do-over!