Action Figure Review: Buzz-Off from Masters of the Universe by Super7 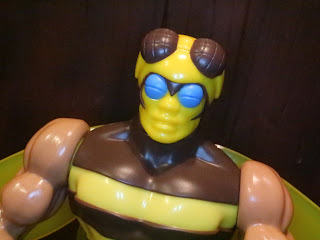 Today I'm beginning to make my way through series 4 of Super7's neo-vintage Masters of the Universe line and I'm starting with the Heroic Spy in the Sky, Buzz-Off. Buzz-Off was not a figure I owned as a kid. In fact, I probably didn't have a Buzz-Off until about 9 or 10 years ago. He's definitely a figure that stands out, though, thanks to his yellow and brown color scheme. While Buzz-Off showed up in the Filmation cartoon in four episodes, he definitely isn't one of those characters that jumps out at me as a must-have in the Filmation style. I really would have rather had characters like Ram Man, the Sorceress, Catra, Adora, or my beloved Cringer before Buzz-Off. Still, a nice looking figure is a nice looking figure and Buzz-Off definitely feels like a figure that Super7 put a lot of effort into. I would wager he's a favorite of someone at Super7 to get this kind of treatment. Let's check out Buzz-Off after the break... 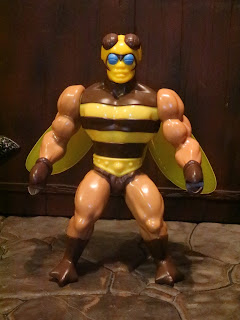 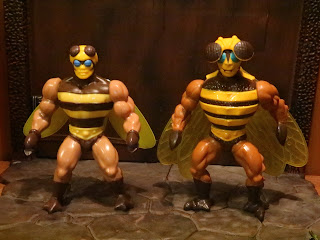 * On the left is Super7's Filmation inspired Buzz-Off while the vintage Buzz-Off is on the right. While these guys look rather similar in color, Super7's figure is smoother with less detail on the body and the wings in an attempt to capture the Filmation animated look. His legs are also more "human" without ridges on the side. 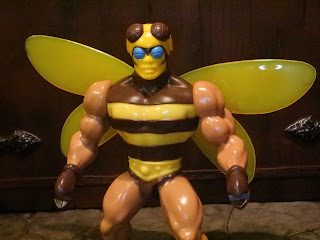 * Buzz-Off is  great looking figure who definitely pops on display. The color schemes of MOTU characters, especially those early characters from the first few years of the line, are so strong that just seeing two or three of the colors together automatically brings the color to mind. Buzz-Off has a neat, clean paint job and a great silhouette thanks to his wings. 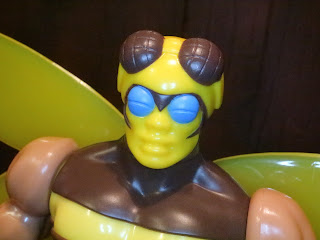 * I like Buzz-Off's headsculpt. In fact, this is one of the few headsculpts that I actually like better than the vintage. Buzz-Off looks less "bee monster" and more like a unique species with similar ancestry to bees. I like the Andreenids and I wish we'd get at least one more Andreenid character in some MOTU line. The vintage Buzz-Off had a removable helmet that enhanced his vision, but this figure has the helmet permanently attached in a raised position so you can see Buzz-Off's blue eyes. 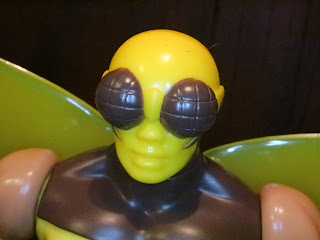 * Interestingly, Buzz-Off has a separate portrait depicting his goggles firmly on his face. This is the first vintage styled MOTU figure I can think of with a separate portrait. The head just pops off of a peg and it fits really well and is easy to swap with no concerns about breakage. 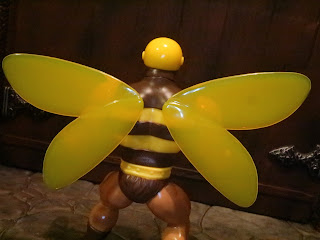 * Buzz-Off's wings aren't as cool as the vintage figures but they do have a similar yellow translucent color to them that is just really, really nice. It's like they're made of honey! I mean, that wouldn't work or anything, but it's what they make me think of. The wings come separate in the package and you just pop them on. I wouldn't try popping them on and off, though, as they don't seem to be made for that. 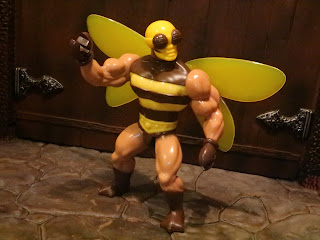 * Buzz-Off moves just like the earlier figures in the line and feels quite similar to a vintage figure. He still has the swivel/hinge hips of this line rather than the elastic bands of the vintage toys, but it works and feels more durable. If you liked the vintage toys you'll like this I should think. 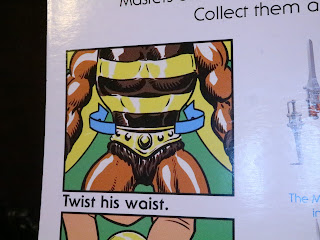 * Also like most other figures in the line, Buzz-Off has the spring loaded waist that allows him to swing his claws left or right while battling Skeletor and his Evil Warriors. Buzz-Off's power punch works great and packs quite a wallop! 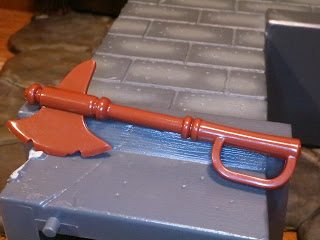 * Buzz-Off's ax is very similar to the vintage toy's ax. It's very sturdy and comes in  beautiful reddish-brown color. I like the little chips out of the ax blade! It adds a lot of character to the accessory. 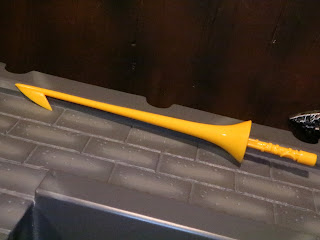 * Buzz-Off also comes with his "laser lance" which he uses in the Filmation episode "The Arena." This is a really cool and rather wicked looking lance that the figure actually holds better than the standard ax. 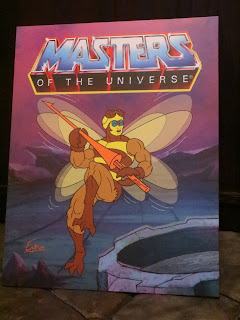 *  I really am quite fond of the art cards included with these figures. They kind of mimic the look of the minicomics in the vintage packaging but they're a simple cardstock art print. On the front is a really cool image of Buzz-Off while the back features an image of the Filmation model of the character and some text. 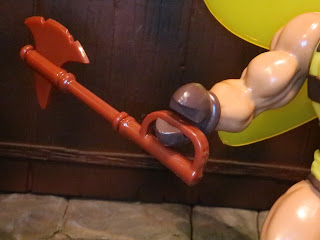 * This is a flaw of the original figure, but it's repeated here so I gotta mention it: Buzz-Off really has a hard time holding his weapons. It would have been nice if Super7 had either given him "slots" in his claws to better grasp these and swiveled his claws sideways. As it stands, he kind of looks awkward holding most anything. 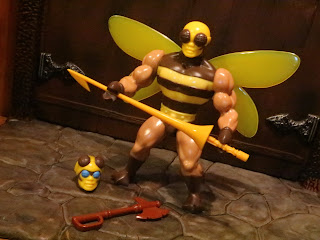 I was surprised by how impressive Buzz-Off turned out. He's got some really nice accessories, a great design, and the interchangeable head, which is a really cool feature. Seriously, I wish more figures in this line had different options for interchangeable heads. While Buzz-Off isn't one of the main Filmation characters, he defintiely turned out swell and makes for a great looking figure. He's pretty Epic and really makes you feel like you're getting a lot for your money here. I'd love to see Super7 get the chance to continue this line, but it seems that Mattel is blocking that since they don't want competition for their MOTU Origins line next year.


If you're looking for more Buzz-Off items, check out the following: The M.U.S.C.L.E. green Buzz-Off and series 1 Buzz-Off, the Funko POP! Buzz-Off, and the 200x styled Buzz-Off head from the Heads of Eternia pack.

For more Masters of the Universe reviews check out the following: