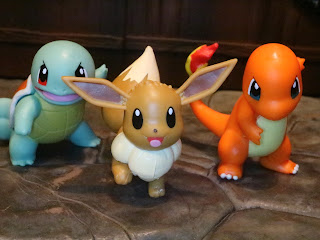 The Pokemon toy license has gone around like crazy and the latest holder is Wicked Cool Toys. I'm not a hardcore Pokemon collector but I am a huge Nintendo fan and I love the characters from the Pokemon game and show. Detective Pikachu was also one of my favorite movies this year, so I'm definitely a fan of the brand and have been since I first awaited Pokemon Blue back in the day! I'm most familiar with the original 151 Pokemon, plus a few other special favorites (my daughter's obsession with all things Eevee and her many evolutions has definitely worn off on me) so this set was a nice find. Usually these figures retail for around $7-$10 dollars for a two-pack with the larger ones (like Psyduck) selling for around $7-$10 each. This set features twelve Pokemon, nine of whom are Generation 1, and it was only $30 bucks. Not a bad buy for a very nie set of painted minifigures. Let's check these little guys out after the break... 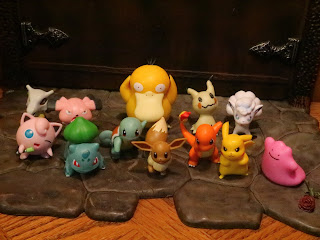 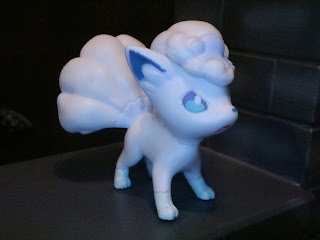 * First up is Alolan Vulpix, who my daughter and I figured out the other day would be the same size (in real life, according to the Pokemon Handbook) as our Jackabee. My daughter has a stuffed version of this ice type variant of the original Vulpix from the Alola region. This is one cute Pokemon, although she's definitely sculpted in a bit of a battle pose. 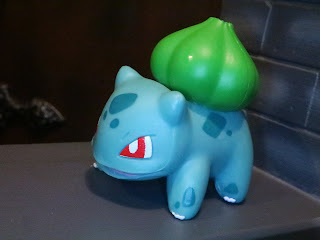 * I like to believe that I do a killer Bulbasaur  impression! Bulbasaur was my original starter Pokemon in Pokemon Blue and I've always had an affinity for the little guy. The paintwork and molding on these figures is seriously very neat and clean. Bulbasaur is the shortest figure (his head is the lowest to the ground of anyone in the set) but the bulb on his back does give him a nice bit of heft. My daughter has a stuffed Bulbasaur, too. She collects the plushies and is getting to be the regular Pokemon master herself! 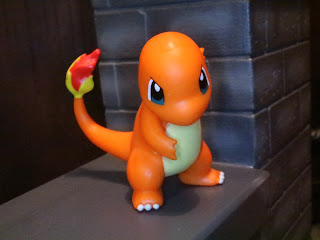 * This set came with all of the original starting Pokemon which are sold in 2-packs along with a Pikachu figure. It'd be between $21 and $20 dollars to get all the starters, plus end up with three Pikachu figures, or you can snap up this set! Charmander is definitely either getting ready to scratch or he's dabbing. The flame on his tail is nicely painted for a small toy like this! 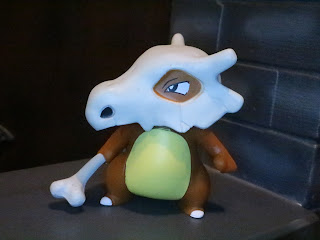 * I like Cubone. He's still cute and cool, but dang, does he have a dark origin: The skull and bone he's wielding? They probably belong to his mother, whose death he's still mourning. That's a pretty fun little chestnut to explain to my daughter every time we read about Cubone in her Pokemon Handbook. The figure looks great! The eyes are very neat and clean and the sculpt on that skull is just aces. 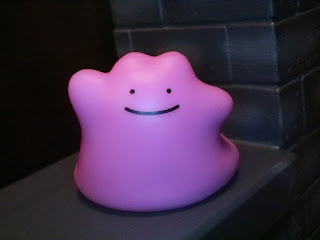 * It's Ditto! Ditto looks like a piece of chewed up gum with a simple smiley face drawn on. That's accurate to his in-game counterpart, though. Ditto is a shapeshifting Pokemon, which means that you can pretend that any other Pokemon figure you own is Ditto! 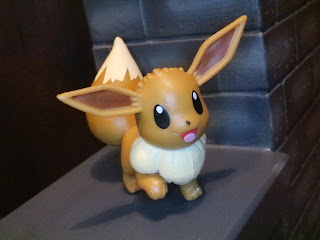 * Eevee! Eevee is now my favorite Pokemon because it's my daughter's favorite. Last year we were playing Super Smash Bros. Ultimate and my daughter first discovered Eevee. "Who is that she asked?" I told her and she said "She is just the cutest little Pokemon I have ever seen!" After a month of pretending that she was an Eevee, my daughter received a stuffed Eevee under the Christmas tree. This Pokemon captures Eevee' cuteness brilliantly! 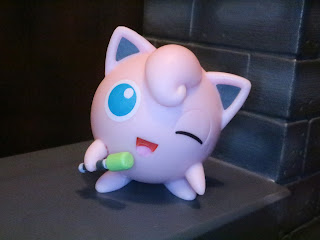 * Not only is this a really cool looking Jigglypuff (I love the wink!) but she's also sporting her microphone, allowing her sleep inducing song to go viral! She's so cute! 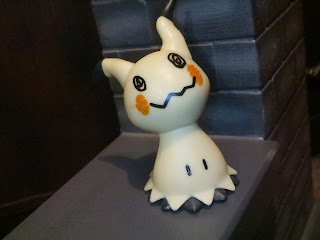 * Mimikyu is another one of the newer Pokemon that I'm familiar with as it has a great design! Apparently it's actually really terrifying so it disguises itself as a Pikachu so people will befriend it. It's either really adorable or deeply disturbing, depending on how you look at it. The sculpt is excellent, as is the crudely painted face. It matches the in-game appearance/ art perfectly. 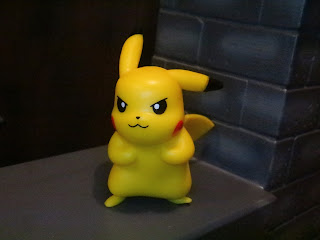 * It turns out that you're not legally allowed to release a set of Pokemon figures without a Pikachu in there. This version of Pikachu looks like he's ready for battle. He's sporting a cool grin, though, because Pikachu knows what's going on. He knows he's the very best, like no one ever was. I love the positioning of his ears, too! 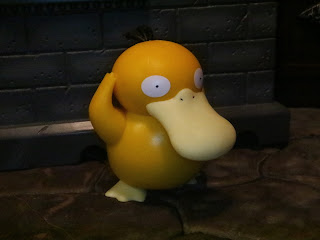 * Psyduck is usually sold on his own as he's the largest figure in the set. I actually still have an old Psyduck toy from the original release of the games that's battery operated. He shakes and says "Psyduck" and "Psy-yi-yi." This one doesn't do that, but he is nicely in scale with everyone else. He's a simple sculpt, but he captures the awkward lovableness of Psyduck. 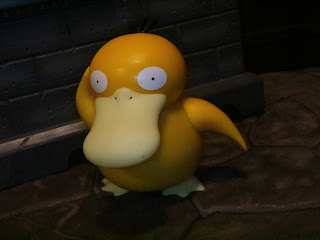 * Psyduck is actually articulated! His...wings,  guess, swivel at the "shoulder" so that he can take his normal arms at his side pose or cradle his head while he's dealing with one of his headaches. 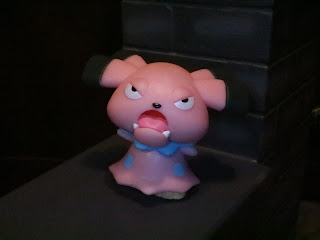 * I'm mostly familiar with Snubbull due to his appearance in the movie Detective Pikachu. The sculpt is excellent here, as are the paint apps. This little guy definitely captures a peculiar mixture of bulldog charm and toy dog froufrouishness. 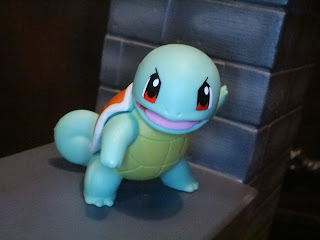 * Rounding out the original trio of starting Pokemon is Squirtle! I love the sculpt of this guy, especially his great facial expression! He looks really eager to start a Pokemon battle!

Considering that you're getting 12 painted minifigures, one of them featuring articulation, for about $2.50 a pop, there's no way to argue that set isn't worth the money. Folks who have been buying up the single releases may not need this (fortunately, I don't believe there are any exclusive figures in the set) but if you've held off, this is an Epic deal. I love the selection here! Usually I feel like the Pokemon figures are a bit overpriced but this set feels like an insanely good deal! I found this at Wal-Mart but it wasn't in the toy aisle; it was up front where trading cards, Pokemon cards, and other stuff like that is kept. Catch 'em all, Pokemon lovers!