Action Figure Review: Evil-Lyn from Masters of the Universe by Super7 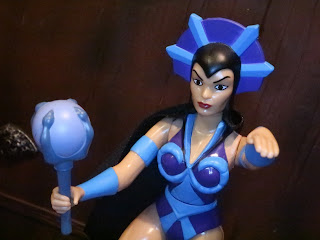 I'll be making my way through series 4 of Super7's Neo-Vintage Masters of the Universe toyline and today I'm checking out the figure of a character who truly deserved a Filmation accurate figure in the line: Evil-Lyn. Being one of the main Evil Warriors in the cartoon, Evil-Lyn had a unique appearance in the animated series that was quite different from her action figure counterpart. While the action figure Evil-Lyn was simply the Teela figure with a new head and paintjob, the cartoon Evil-Lyn really offered up a great design that fully realized Evil-Lyn's role as an evil sorceress. She turned out great and is definitely one of the best offerings from Super7 in this line. Let's check out the mystical and malevolent evil warrior goddess after the break... 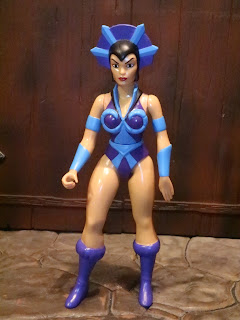 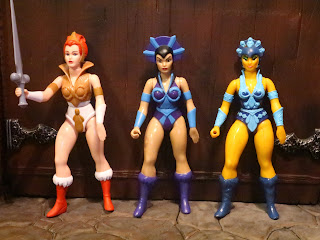 * Super7's Evil-Lyn is in the center here, and I have Super7's Teela (on the left) and Mattel's vintage Evil-Lyn (on the right) for comparison. This time around Evil-Lyn and Teela don't share a body sculpt: only their limbs. Looking at the vintage figure, you can see how different the skin tone is on this version, along with the small changes in the outfit. 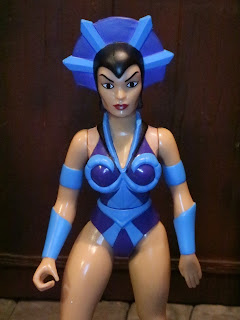 * I really am glad that Super7 gave Evil-Lyn her own outfit this time around. Yeah, it's similar to Teela's, but it's not the same. Evil-Lyn looks fantastic and is a figure that I think definitely is an improvement over the vintage toy. Don't get me wrong, I love the vintage Evil-Lyn, but this one really makes her seem much more unique and even more menacing. 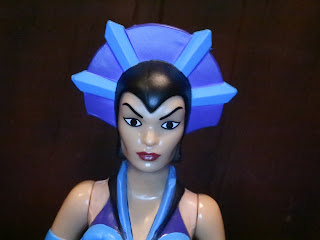 * The headsculpt is fantastic and the paintwork really captures the character's menacing appearance. Her headpiece is quite elaborate and her eyes are very stunning and intense! 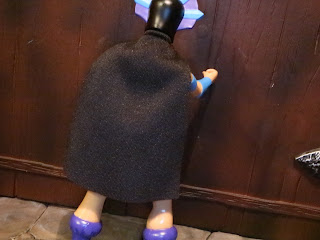 * Evil-Lyn has a cape! That was one of the cool changes that Filmation made to the character design and Super7 has captured it here with a Super Powers styled cape. It's a simple black fabric cape with a plastic neck clip inside, but it works well. It's not as dramatic as her cartoon cape but it does feel like what we may have gotten for a Filmation based Evil-Lyn figure back in the mid 1980s. 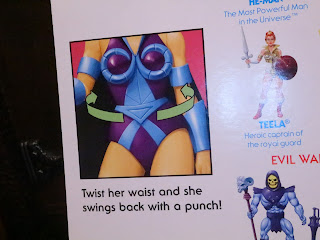 * Most of Super7's neo-vintage figures feature spring loaded swivel waists. It's fun to have a genuine action feature in a MOTU figure again, allowing Evil-Lyn to punch, cast spells, or just beat down fools with her magic wands. 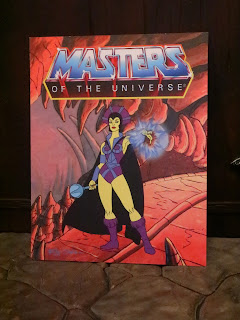 * I still like the decision to include art cards with these figures. They kind of mimic the look of the minicomics in the vintage packaging although they're still just a simple cardstock art print. On the front is a really cool image of Evil-Lyn casting a spell from Emiliano Santalucia while the back features three images of the evolution of the character from toy to cartoon star. 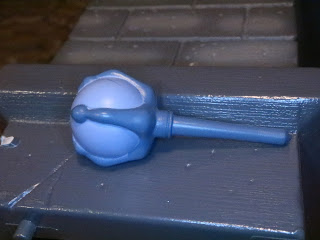 * Evil-Lyn comes with two magic wands, the first of which is a shorter wand that looks more similar to the wand she uses in the Filmation cartoon. The crystal ball at the top of the wand is painted a separate color which definitely doesn't seem like something we would have seen back in the 1980s, but I like it. 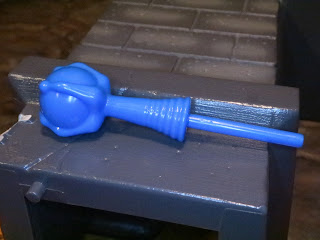 * Evil-Lyn's second wand is a bit longer and it's cast in light blue plastic. This wand is very similar to the wand the vintage toy wielded, making this a better choice for folks who want Evil-Lyn to look as much like a vintage Mattel release as possible. My vintage Evil-Lyn is actually missing her wand, so this might be a good substitute for the time being. It fits great in he vintage toy's hand, just FYI. 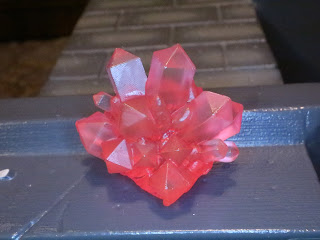 * Evil-Lyn's final accessory is a chunk of Coridite Crystals. These crystals appeared in both the Filmation series and the Mike Young productions series in the early 2000s. Mattel's Filmation inspired Evil-Lyn came with Coridite Crystals as an accessory, so maybe Super7 took some inspiration from there. Evil-Lyn definitely tried to get her hands on these in the cartoon a few times. The figure can't actually hold these, but they do make a really cool artifact for the toys. 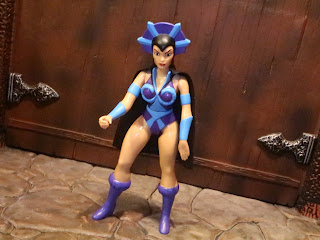 * Like with Teela, I'm really not liking the way the egs are posed on the figure. the legs are really posed oddly in such a way that Evil-Lyn has to take a very wide stance to look like she's standing naturally. Honestly, it just ends up making her somewhat difficult to keep standing. 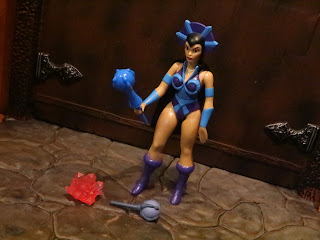 With this newest series of figures, I really feel like Super7 has put in some real effort to make these feel like a good value. Besides a truly unique Evil-Lyn who doesn't share an outfit with Teela, you're also getting two magic wands, a cape, and some Coridite Crystals. There's a lot here and for a line seemingly as niche as this, those little extras are quite welcome. Evil-Lyn is another Epic figure from this line, and she would definitely be one of the figures I recommended to someone just wanting to see the best of what this line has to offer.

If you're a fan of Evil-Lyn I've also reviewed the M.U.S.C.L.E. Evil-Lyn from the Masters of the Universe green boxed set, the ReAction Evil-Lyn, and the Mega Construx Evil-Lyn.