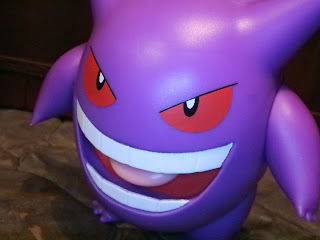 Confession time: I've never been the biggest fan of the Pokemon games but I love the character designs and the show. The last of the actual Pokemon games I played to completion was Pokemon Yellow, which was way back in 1999. I really liked Pokemon Snap, too. Since then I've messed around with a few of the releases and my daughter and I play Let's Go, Eevee! from time to time, but I'm way more interested in the characters, the designs, and watching the show. Last year Wicked Cool Toys began producing Pokemon toys (I think Tomy was producing them before) and so far they seem to be offering a nice selection of characters. They seem to mostly focus on the first generation characters, which works great for me. I certainly love some of the newer Pokemon, but the original 151 is where my heart lies. Now that my 6 year old daughter is obsessed with all things Eevee, my enthusiasm for Pokemon has been back, too. Today I'm checking out Gengar, one of the Battle Feature Figures that features a legitimate action feature. Gengar is a hybrid Ghost/Poison type Pokemon who is the evolved form of Ghastly and Haunter (those guys need to be made as toys soon, too!). Let's check him out after the break... 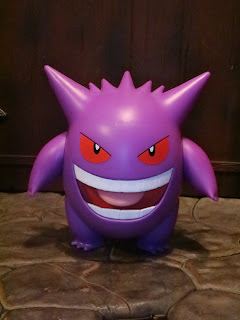 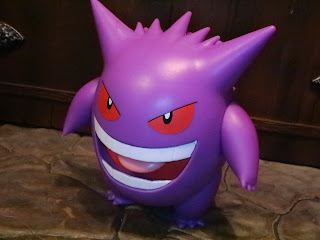 * Pokemon come in all shapes and sizes, so designing them as toys to fit in a uniform line has to be quite a challenge. Wicked Cool Toys has multiple size ranges going and Gengar is from the medium range, which is fitting as he's larger than the average Pokemon you might think of, like Pikachu or Eevee. He's quite bulky and very round with a smooth, clean sculpt. I like the little spikes that give him his crazy, ghostly appearance. Of course, he's cast in deep purple because he is a Shadow Pokemon, after all. 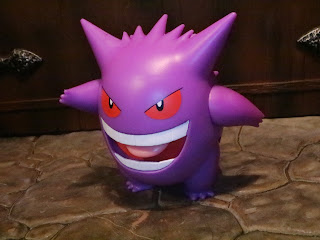 * Usually two points of articulation wouldn't be much to write home about but considering that most Pokemon figures of this sort are just non-articulated minifigures, Gengar's swivel shoulders are a nice treat (if a ghostly shadow can have shadows). For a figure like this, sometimes a little articulation is all you need! 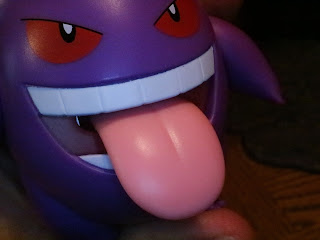 * Gengar also has an action feature: A licking tongue! When his body is pushed down (or his legs pushed up) Gengar's long tongue will dart out of his mouth to deliver a lick attack. It's actually a really fun feature that does approximate one of Gengar's most prominent starting moves. 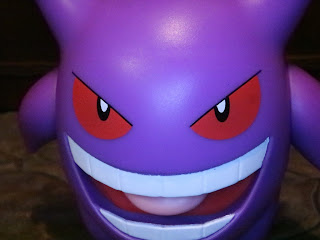 * Gengar's eyes are simply painted on, which seems a little too simplistic for a figure of this size. I really wish he had some level of sculpted detail on the eyes just to help them stand out a bit more. 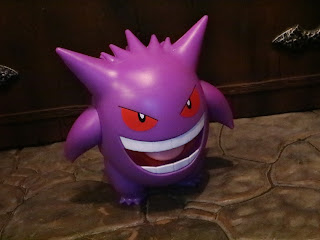 Gengar might be a simplistic but he really is a pretty fun toy of a Pokemon that doesn't get made into toys very often. I like the bright, colorful sculpt and the action feature. This guy is definitely a toy rather than a collector's item, but I'm A-OK with that. He's a Good figure. Could he be better? Yeah, of course. Does he make a great display piece to put alongside your other Pokemon or World of Nintendo figures? Absolutely!

This is the first figure of Gengar I've reviewed. For more Pokemon reviews from Wicked Cool Toys, check out the following:
Multipack
Posted by Barbecue17 at 11/15/2019