Action Figure Review: Gold Statue He-Man from Masters of the Universe by Super7 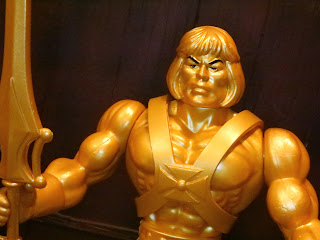 Today I'm checking out the third figure in the Super7 "Statue Variants" miniseries and this time it's Gold Statue He-Man. I've never been a fan of toy companies going to gold and silver variants for action figures, misguidedly assuming that it gives a figure some additional level of prestige. I'm thinking of things like the old McFarlane gold Spawn variants or the gold Star Wars figures being released for Rise of the Skywalker. Of course, when you have something where a gold variant legitimately makes sense, it can be kind of cool. Gold Statue He-Man is a metallic variant that is legitimately based on an episode of the Filmation cartoon series, The Shaping Staff, where He-Man is turned into a gold statue so that he can be replaced by Faker. It's a pretty scene specific variant, but you know what? I'll take it! Let's check out Gold Statue He-Man after the break... 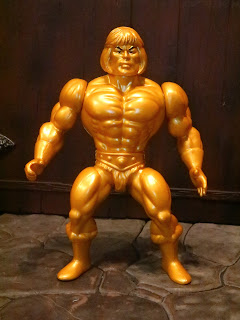 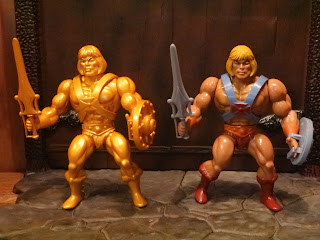 *On the left is Gold Statue He-Man while the standard Super7 He-Man figure is on the right. These are definitely the same figure, simply with different paint applications. If you have He-Man, or Robot He-Man, then you should know what to expect. 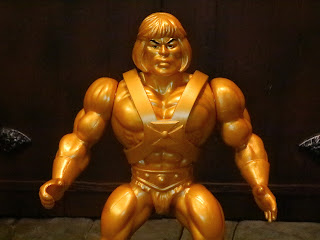 * Gold He-Man is...well, gold. Yup. If you've wanted a solid gold looking He-Man figure, this is it. Seriously, it actually looks pretty cool. The plastic does have a nice metallic sheen to it. I've heard some folks complain that he looks too yellow in pictures, but in hand I definitely think he looks very much like he's made of metal. Or like he's been painted gold by Auric Goldfinger. 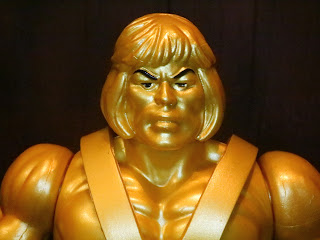 * Super7 is going with a Filmation inspired look for these figures and He-Man thus has the appearance of his Filmation counterpart rather than the vintage toy counterpart. It's a pretty good look. I do like that Super7 painted the eyes and eyebrows, too. It gives the figure a bit more character, matches the cartoon cels, and just makes it a bit more interesting overall. 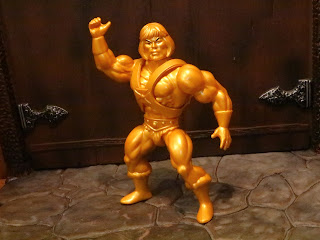 * Gold Statue He-Man moves just like the earlier figures in the line and feels more like a vintage figure. He still has the swivel/hinge hips of this line rather than the elastic bands of the vintage toys, but it works. If you liked the vintage toys you'll like this I should think. 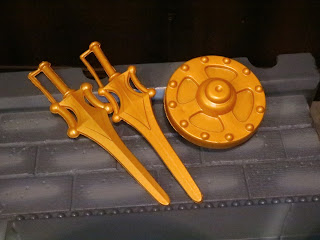 * He-Man comes with the same three weapons that the standard figure has: A standard Power Sword, a half Power Sword, and a shield. They're also gold, so you can use them with this figure or mix them up with some other 5.5 inch MOTU figures for customs. 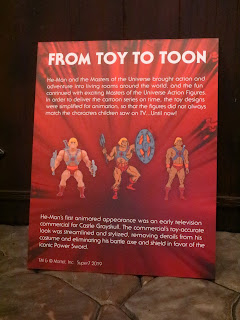 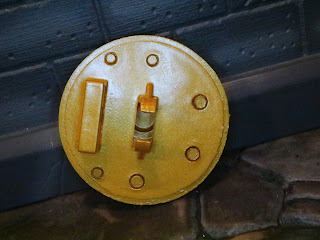 
* The shield is made from two different pieces, which wouldn't be a problem in and of itself, but the fact that it comes off so easily is pretty frustrating. Also, it just doesn't fit on He-Man's left hand terribly well. The clasps are a bit too hard, so be careful. 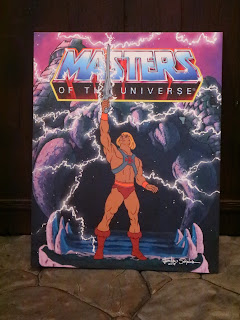 * I wish Super7 would have given us some different art for this variant. I know they're trying to get some more mileage out of molds, especially now that Mattel is putting a hold on this line so that it doesn't effect the sales of the Masters of the Universe Origins toys next year, but c'mon! A little extra effort would have been nice! 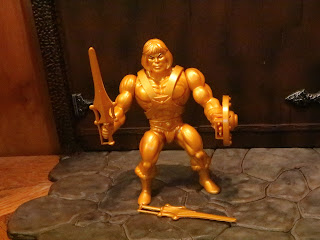 As crazy as it sounds, Gold He-Man is a pretty solid figure. The gold color scheme kind of makes some of the problems I have with the standard Super7 He-Man go away since the color washes them out a bit. He's got a few nice extras, a spring loaded punch, and he's shiny. It's kind of tough to beat that, really. Yeah, Gold Statue He-Man might be a silly variant, but darn does he look slick on the shelf. Folks will notice him, for sure. And don't we all just want to be noticed because of the coolness of our Masters of the Universe collections? This guy is a Great and a 1/2 figure and really a pretty cool toy. I was surprised by how much I liked this series overall.

Prince Adam/ He-Man is one of my favorite characters and I've reviewed so many figures based on him that he has his own review archive. For all of my He-Man reviews, check out Fabulous Secret Powers!