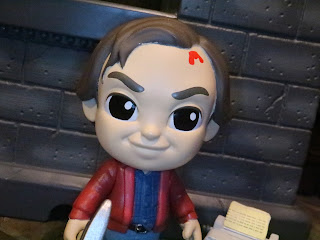 For today's Re-Halloween special I'm checking out a figure from Funko's 5 Star: Horror line that I was really hoping would arrive in time to be part of The Scream of 31 Days of Toy Terror, but that sadly didn't: It's Jack Torrance from The Shining. We've been seeing more licensed items from Stanley Kubrick's classic adaptation of The Shining and I have hopes that someday Mezco will release Jack Torrance in the One:12 Collective line. Apparently Jack Nicholson might be pretty controlling of likeness rights, though, so, maybe it's a bit of a pipe dream (although Hot Toys did get Jack's likeness for their Joker figures from the 1989 Batman film). Still, I was pretty excited to see this figure being released and he was only one of the two must haves from the 5 Star: Horror series for me. Since Doctor Sleep is coming out this weekend, now is a great time for a review of Danny's dad. Let's check out Jack Torrance after the break... 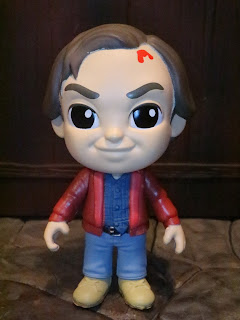 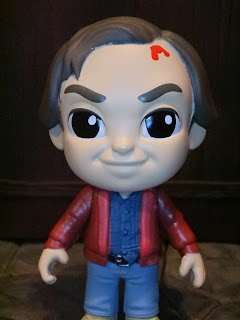 * Jack Torrances outfit isn't necessarily memorable on its own but, combined with the hair, the blood stain on the forehead, and the accessories, I think you have a fairly recognizable toy. Again, we're not talking as recognizable as nearly any other horror icon out there (because without a true Jack Nicholson likeness, this is just a guy in a red jacket) but if you're displaying him as part of a horror collection, I think most horror fans will figure out who this is. There's some nice detail here, particularly in the plaid shirt. The plaid pattern is actually sculpted, interestingly enough. 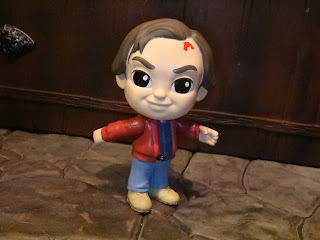 * The 5 Star figures have swivel heads and swivel arms, so you do get the opportunity to pose each figure a little bit. The figure does seem to be of a fairly nice quality, though, so I imagine that most of these would be great for kids. I mean, maybe not Jack Torrance, but the 5 Star range also has Harry Potter, DC Comics, Stranger Things, and The Nightmare Before Christmas figures, all of which would make good kids toys 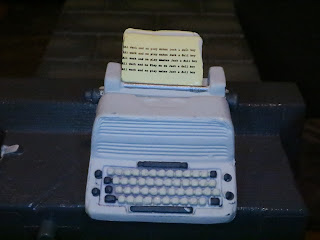 * Jack's coolest accessory is the typewriter. Rather than spending his time writing his play or novel, Jack ended up typing page after page of the same text on this 1968 Adler Universal 39 typewriter. This is a really cool sculpted typewriter and I imagine a lot of action figure fans collectors would dig having this. Seriously, it's cool to get an accessory of something we don't see as an accessory often. 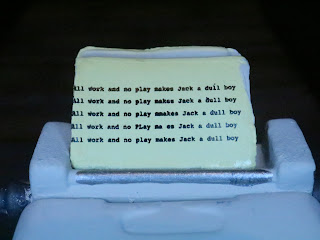 * If you look closely you can see that the page in the typewriter actually has "All work and no play makes Jack a dull boy" typed over. And over. And over! Did you know that various foreign language versions of The Shining had different sayings that Jack typed over and over? In the Italian version of the film Jack types "The morning has gold in its mouth." 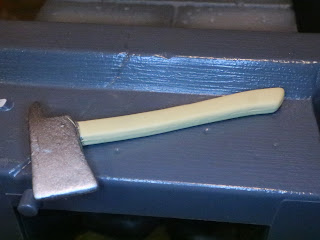 * Of course Jack comes with his ax. Here's Johnny! It's a pretty simple ax but it works. 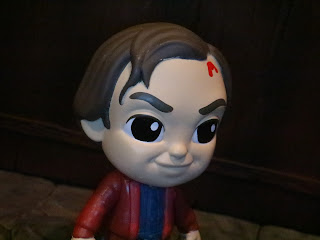 
* The likeness is definitely kind of "cutesy" which is the style of the line, but I'm definitely not seeing very disheveled hair here or intense eyes. Funko did a lot better conveying Jack's likeness on the POP! figure than on this one. 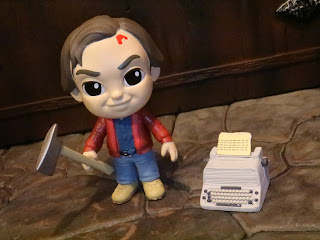 While the likeness isn't anything to write home about (either NECA or Mezco needs to work to release the ultimate Jack Nicholson version of Jack Torrance), the figure is pretty cool. It's fun to see Jack standing alongside other horror cinema icons, especially with the great accessories here. The ax is nice but the typewriter is terrific. This is really a very, very cool accessory! For the $9 or $10 bucks you'll find this little guy for, he's actually a Great little collectible of a character that hasn't had many toys made in his likeness yet.

For more 5 Star: Horror reviews, check out the following:
The Curse of Michael Myers
Posted by Barbecue17 at 11/05/2019