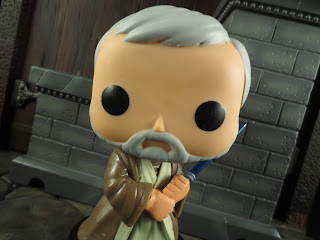 Today I'm looking at the first of two figures from the most recent Star Wars: Smuggler's Bounty box which featured the theme "The Cantina." I'm not a diehard POP! collector by any means but I do enjoy picking them up every now and then and I absolutely love the mystery box concept. Of course, considering that it's all Star Wars stuff inside I know that either myself, my wife, or my little one will typically have a use for every item. The first of two POP! figures in this month's set is Ben Kenobi #99. Wielding his lightsaber, this POP! represents the Jedi Master during his conflict in Chalmun's Cantina with Ponda Baba and Dr. Evazan. I know there has at least been one other ANH Obi-Wan Kenobi POP! released which featured him with his hood up. This guy is exclusive to the Smuggler's Bounty box, though, so he's going to be a bit rarer. Ready for a look at Master Kenobi? Then join me after the break... 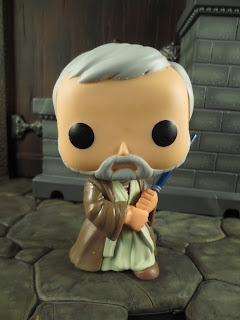 Non-Scalper Price: $25 as part of the March 2015 Smuggler's Bounty crate which included one other POP!, a t-shirt, pencil w/ Chewbacca topper, Greedo patch, and a Figrin D'an enamel pin. 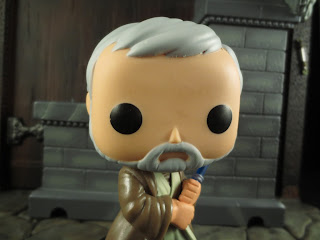 *Considering their simple style, Funko did a great job of capturing old Ben's likeness here. I think that's partly due to the nice work on the beard and the hair. It's simple, but it works. I like the fact that his hood's down, too, which helps differentiate this version of Obi-Wan from his duel with Vader on the Death Star. 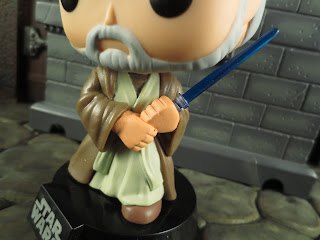 * Not only is Obi-Wan wielding a lightsaber but he's also in a pretty nice looking pose. This is his "I just cut that Aqualish thug's arm off, now who else wants some" pose. It's pretty cool, particularly the fact that Obi-Wan's holding his lightsaber with both hands. He's much more visually interesting than many other POP!s just for that reason alone. 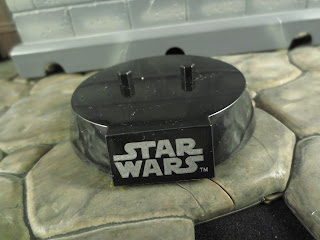 * Ben Kenobi comes with a stand like the rest of the Star Wars POP! figures. Again, I love the look of this and also appreciate the fact that it is removable in case you really want uniformity across your POP! collection. My guess is that Funko includes these to help keep these standing since they're bobble-heads, which probably gets them around licensing agreements with Hasbro and other companies making "action figures." 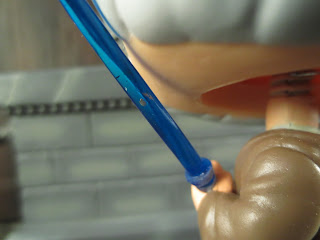 
* The only real concern I have here is that there is some errant silver paint on the rear of Obi-Wan's lightsaber blade. It's not a huge issue, as it's just a bit of paint slop, but it's still not supposed to be there. 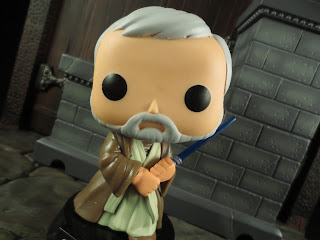 Initially I thought Ben Kenobi was kind of a odd choice for a Cantina themed box, as there are so many unique and interesting alien species present who would seemingly make better POP! figures. It turns out, though, that Ben Kenobi turned out to be a really solid POP!. The pose, the beard, and the lightsaber definitely contribute to him being a much more distinctive POP! than I initially thought he'd be. Overall, I'd give him a Great rating. He's well worth tracking down for fans of the character who collect Obi-Wan merchandise or if you're a die-hard POP! collector who wants everything.

I have reviewed a few other POP! Star Wars figures, though: