Road to The Rise of Skywalker: IG-11 from Star Wars: The Black Series Phase III by Hasbro 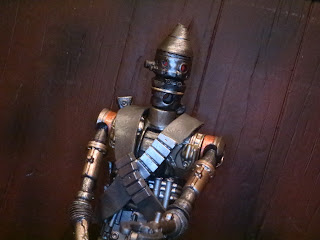 I write my reviews a day or so in advance usually so while today is November 13th, and I probably have watched The Mandalorian, I'm actually writing this on Monday the 11th. I'm really looking forward to the show, though, and I hope it turned out awesome. I don't actually have the Mandalorian himself yet, which is definitely frustrating me. He's been tough to find! He's actually been the only standard figure from the Triple Force Friday launch that's been hard to find, so I'll still be eagerly searching for him for the near future. Today I'm not checking out the Mandalorian, though, but IG-11. IG-11 is an IG unit programmed to follow Bounty Hunters Guild protocols and, thus far, that's all I know about the character. Well, other than the fact that he's voiced by Taika Waititi, the director of Thor: Ragnarok and the upcoming Thor: Love and Thunder and the voice of Korg. IG-11 was very easy to find as he is a Best Buy exclusive, you can easily order him from their website or have him set aside at a store, and they seem to have plenty in stock. Since he's an IG unit, like IG-88, Hasbro reused the body from the 2015 IG-88 figure from the Black Series Phase II. That figure had some flaws that feel like they are only amplified here. Let's take a look at IG-11 after the break... 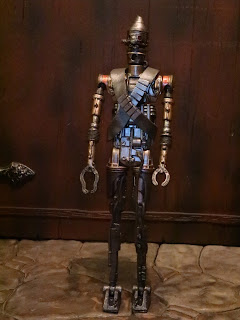 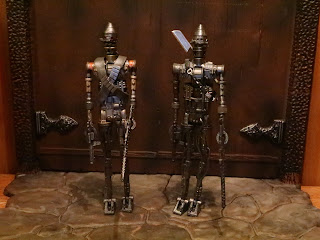 * On the left is IG-11 while IG-88 is on the right. Other than the paint applications and the bandoliers, these two guys are the same figure with the same flaws. Unless you use something like a doll stand, IG-88 tends to wilt over time and I fear that IG-11 will suffer the same fate. 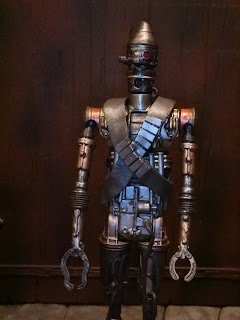 * IG-11, just like IG-88, is a nice looking figure. He's as detailed as the original figure with better paint applications. Well, maybe I should say more interesting paint applications as IG-11 has a greater range of colors on him including lots of copper and bronze highlights. His bandolier isn't removable but it does look cool (it's a separate piece over his torso) and it nicely differentiates him IG-88. 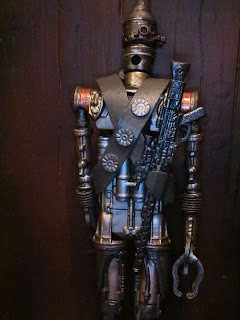 * The back of the bandolier is cool as IG-11 is toting around what appear to be mines of some sort. He's also got a holster for his DLT-20a rifle. It slides right in the holder and looks fantastic. 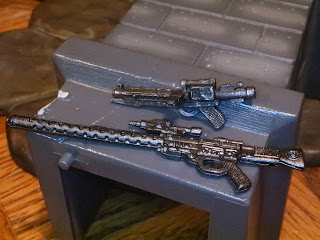 * Like IG-88, IG-11 comes with two rifles: The previously mentioned DLT-20A and a modified E-11. They're a bit smaller, which means they weigh less and can work nicely in IG-11's smaller, spindlier arms. They're also specially design to fit in the proper hands: The E-11 (Stormtrooper blaster) fits in the right hand while the DLT-20A (longer rifle) fits in the right hand. There are pegs on his wrists which plug into the weapons to add extra support. 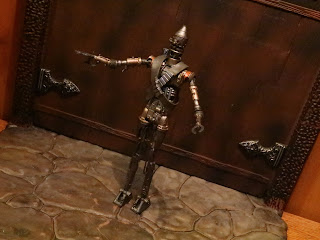 * IG-11 has the same articulation as IG-88, which is both a blessing and a curse. There are some interesting joints that are really integrated into the sculpt but the hips are basic swivels, the elbows are quite frustrating, and the ankles are simple hinges. He's just not a terribly fun figure to pose or play with, which is a shame. 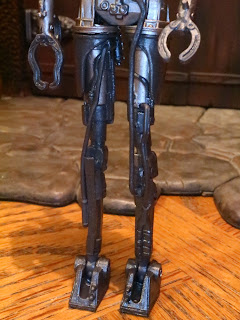 * Also like IG-88, IG-11's legs are molded in a softer plastic that arrived bent in the package. This makes it really, really tough for him to stand up properly. In addition to him being tall and thin, the softer legs really add to the danger of him tipping over. I'm going to be using one of my smaller Kaiser stands to help keep him upright, just like I had to do with IG-88. 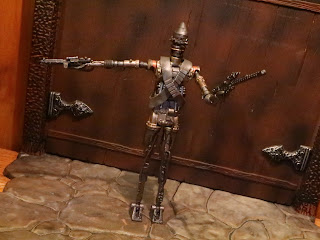 I was really hoping that Hasbro would redesign some of the problematic parts of IG-88 but, alas, they didn't make any changes to the structure of the figure at all. IG-11 isn't a terrible figure, and I'm sure he'll still look awesome on the shelf with Cara Dune and the Mandalorian, but he definitely is flawed and a less interesting figure than his predecessor thanks to coming with fewer weapons. He's still a Good figure, but considering how Hasbro has been knocking there releases out of the part lately I can't help but be disappointed by an average figure in this line.