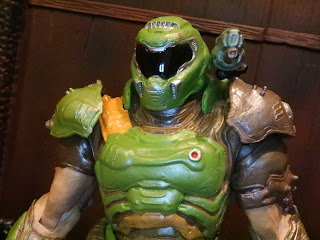 I have many, many fond memories of playing Doom. I've mostly always been a console gamer so Doom coming to the Super Nintendo was a big deal when I was in sixth grade. Remember the blood red cartridge? Getting Doom 64 on the Nintendo 64 was even better! I've played lots of versions of Doom, including the GameBoy Advance Doom, the cellphone exclusive Doom RPG, and of course the newest Doom, just called Doom. Doom 2016 is a fantastic game. Seriously, it's one of the best games I've played in recent memory and it really captures the classic Doom feel while offering lots of cool new ideas, too. The sequel, Doom Eternal, comes out March 2oth of 2020 and this is actually what McFarlane has based the Doom Slayer figure on. While most folks have always just called him the Doomguy or the Doom Marine (in the old novels he was Flyyn Taggart), the new series of games calls the classic protagonist the Doom Slayer. He has more of a "chosen one" background as a lone individual, possibly gifted with divine powers, who battle against the forces of evil over the ages. I've always wanted a figure of the Doomguy. As a kid I had a few G.I. Joe figures I'd use as the Doomguy (the DEF Shockwave was my go to), so actually having a legit Doomguy to go along with my Duke Nukem and Quake Marine figures just feels right (I do have that 1/6th scale B.J. Blazkowicz but I wish we'd get a 1/12th scale version). Let's check out McFarlane's Doom Slayer after the break... 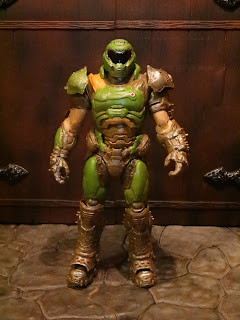 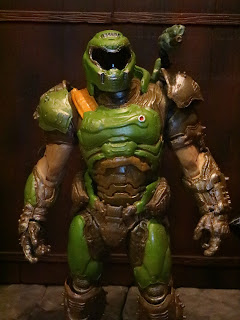 *The Doom Slayer is a large, bulky, muscular figure decked out in his green Praetor suit. This guy is seriously pretty awesome and while I'm sure I was more excited for this figure than most (due to having always wanted a toy of the Doomguy), I think fans of the series and fans of armored figures of this sort will be pretty happy. This guy definitely "feels" like an old school McFarlane figure, and I mean that in a mostly positive way. There's a ton of detail here and everything about the toy just looks awesome. It's like what you'd get if your middle school self, Master Chief, and an artist for heavy metal album covers were asked to collaborate on a new outfit for the military. Put this guy on your shelf and your Hellraiser figures and the big horned guy from Legend are going to start sweating. 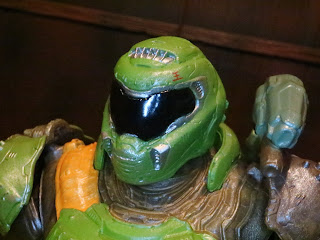 * The helmet looks great. The Doomguy usually has it on, so this is a signature part of his look. The helmet is actually rather hollow at the base, which gives the double balljointed head/ neck peg a very significant amount of motion. It looks great and it's oh so functional! 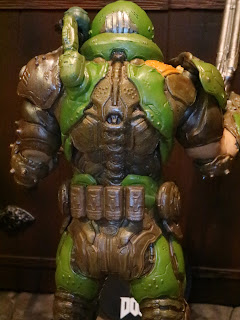 * I love the look of this armor. Seriously, just checking out the detail on this figure is quite fun. McFarlane really went all out here. I haven't picked up a new figure from McFarlane Toys since 2017's Jareth the Goblin King, so it's nice to see another release I was interested in from them. I hope they keep going with the Doom line! 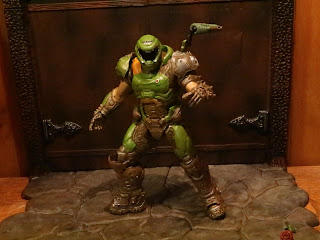 * The articulation is described as "Ultra" articulation, which sounds like a very McFarlane thing to say. There are a lot of joints here and most of them work quite well for a big, bulky, beefy, brawny, and brutal figure like the Doomguy here. The hips, torso, and head really move quite well and I like the double balljointed shoulder pads. They definitely help ensure that the shoulders can move freely as needed. He feels very solid, very durable, and I'm pretty sure you could give a cat burglar a concussion if you slung this guy at their head. 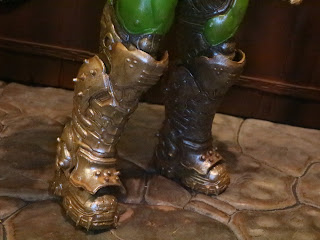 * Check out these boots. Dang! The Doomguy is ready to stomp some demons and give KISS a run for their money in the amazing boots department! 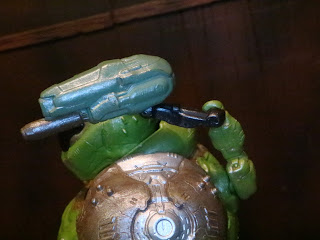 * The Praetor suit in Doom 2016 is upgradeable and it seems that will be the case in Doom Eternal as well. The Doom Slayer has a shoulder mounted flamethrower which both sounds awesome but also like a really bad idea. It looks pretty cool and the arm attaching it to his shoulders has two balljointed and a hinge, allowing it to have a nice range of motion. 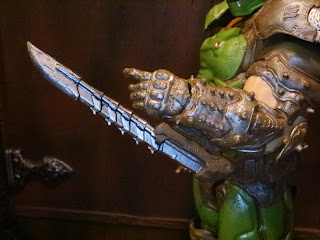 * The Doomguy also has a new melee weapon, called the Doom blade. The Doom blade is a separate piece that plugs in to the bottom of the Doom Slayer's gauntlets. It's a very wicked looking serrated blade that definitely looks like it'll give us some crazy new glory kills in Doom Eternal. 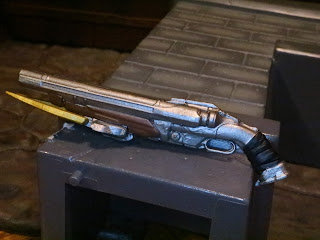 * While I wish the Doom Slayer came with more weapons, he does come with my go to weapon for any Doom campaign: The Super Shotgun. This is a truly wicked looking double barreled shotgun, now with a grappling hook like device underneath. Apparently you can use it to drag enemies towards you, Scorpion style! 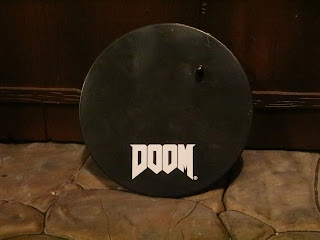 * It's just a simple flat disc with the Doom logo on it but I do like that the figure comes with a display stand. Doomguy stands just fine on his own but the stand adds a bit more stability for display on the shelf. 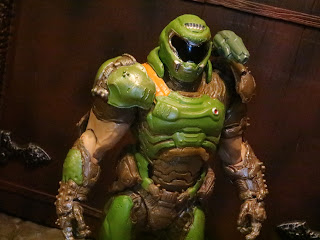 * The Doom Slayer really is a great looking figure, although there are definitely spots with the paint that look more like McFarlane went back to the older paint style using intentionally messy paint to make things look more complex rather than using very clean paint apps with wear and tear and washes. The figure still looks good, but it's definitely a part of McFarlane's style that doesn't work on a non-organic figure element, such as the armor here. 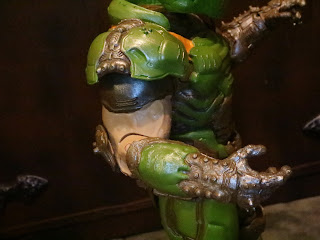 * While I like the articulation overall, the Doomguy's arms do have a very limited range of motion. He can only hold his weapon one handed and then not even in a very good shooting pose. 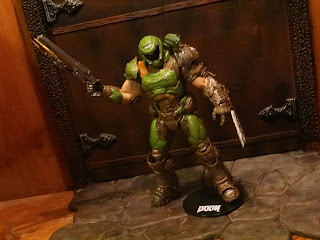 The Doom Slayer really turned out to be a rather impressive figure. He's a character I've wanted an action figure of for well over 20 years, so it's pretty nice to finally have one. While it would have been nice to have another weapon or two and some better arm articulation McFarlane has released a pretty great figure that is retailing at most places for $20 dollars or less. That's a heck of a deal and fans of the game should definitely hunt this guy down. He's an Epic figure, though that rating is fueled by the fact that this is kind of a childhood wish long awaited.

This is the first figure of the Doom Slayer/ Doomguy I've reviewed.