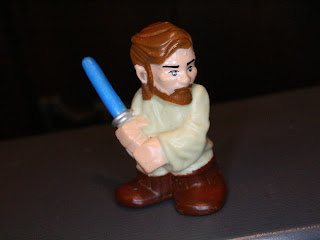 How about another quick, simple review of one of a Star Wars: Micro Force minifigure? Obi-Wan Kenobi is another figure I picked up from a pack of the Series 2 blind bags and, like Emperor Palpatine, he is a reissue of one of the older Fighter Pods figures. It's nice to see Obi-Wan in here as there definitely seems to be a real lack of Prequels based product lately. I love Ewan McGregor's Obi-Wan and I definitely am holding out hope that he'll get a Star Wars Story film at some point. That could be exceptional, couldn't it? Let's check out this mini Obi-Wan after the break... 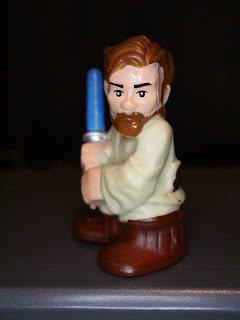 * This version of Obi-Wan Kenobi comes from Revenge of the Sith, so he could be either fighting off some Clone Troopers, dispatching some battle droids, or battling General Grievous, Count Dooku, or Anakin. Dang, Obi-Wan fights a bunch of people in Episode III, doesn't he? I like the look of the figure. The lightsaber seems a little stubby but that seems to match the style of the toy. For being less than an inch the paintwork isn't bad at all. 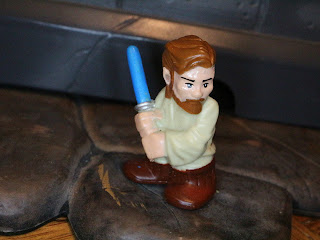 This is a cool little figure. I do wish that Hasbro paired these figures up a bit more within the series, meaning that we should have had a fallen Anakin Skywalker or a General Grievous in Series 2. That would definitely give collectors some incentive to pickup more packs. As it is, who do you pose this guy with? Still, you can't argue with picking up a nice minifigure (or is this a microfigure?) and this one is a Good and a 1/2 little Jedi to protect your desk, cubby, or night stand.