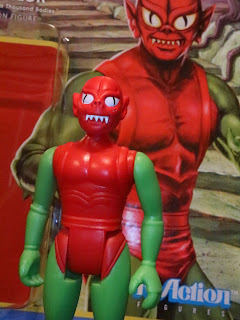 Today I'm checking out another of Super7's Masters of the Universe ReAction exclusives from NYCC 2019 and its.... another Modulok variant! Seriously, 2019 might be the year of She-Ra but it's also the year of Modulok. Super7 has already released four different Modulok figures in the ReAction line and now here comes the fifth! This guy is pretty unique, though, as he's based on the Top Toys version of Modulok (called "Modulock" on his packaging) that was released in Argentina in 1987. Super7 has done some cool figures based on obscure international variants (the Malaysian Hordak and the Leo variants come to mind) and this guy definitely is one of the more unusual international variants. I mean, it's Modulock but now his limbs are green. He's like a Christmas version of Modulok! Let's check him out after the break and see if he's worth another purchase... 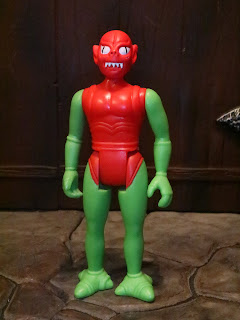 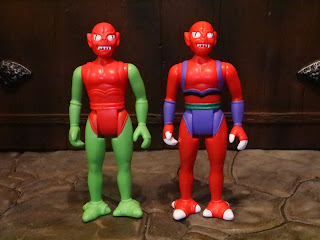 
* On the left is the Top Toys Variant Modulok while Modulok A is on the right. As you can see, the Top Toys Modulok is just a repaint of Modulok A. Other than that there is no difference between the two figures. 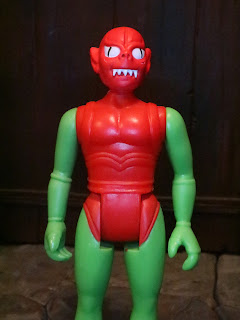 * This sculpt still does a pretty good job of capturing what Kenner styled MOTU figures would have looked like in the late 70s/ early 80s but now we get the crazy green limbs of the Top Toys variant. On it's own, this definitely is a pretty cheap looking figure. Seriously, it looks like a knock-off. This figure showed up loose in some random Ebay auctions over the summer and some people thought he was a random test shot due to the funky, solid colors (I did at first, too). When you realize what he's based on, though, it is kind of cool. It's kind of like an inside joke, you know? 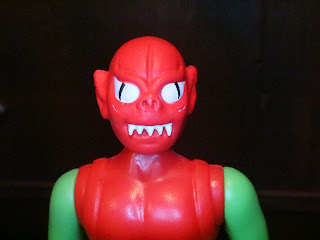 * The headsculpt looks almost exactly like Modulok A except it seems to be painted fully. It's much less glossy for sure. I think it looks a little better than on Modulok A, actually. 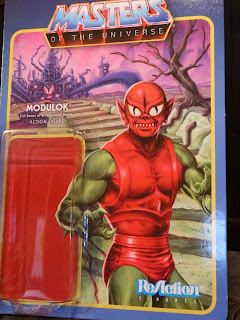 * The card art on most ReAction figures released by Super7 is beautiful and their Masters of the Universe line is no exception. Modulok features an awesome illustration from Jason Edmiston of the character with green limbs hanging out in front of the Fright Zone. I like how the Evil Horde got their own unique backers. To preserve the card I actually made a slit in the top of the blister so I can slide the figure in and out. It work great and allows the figure to be displayed inside and outside of the card. I've got mine hanging on a metal pegboard similar to what you'd see in a retail store! 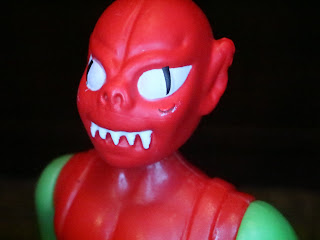 *While taking a closer look at my Modulok, I realized he's got some damage under his left eye. It looks like a little chunk missing from his face, actually.

* While the vintage Top Toys "Moculock" was packaged with only one head on his body, he still came with both heads, four arms, and four legs. Really, why didn't Super7 use the Modulok C or D bodies here as a base? The figure would have been so much cooler! 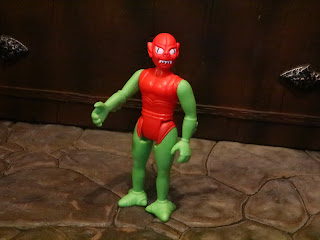 I appreciate the nod to a unique vintage variant but, overall, this Modulok variant is really a figure most folks could skip pretty easily. Maybe if he'd been based on one of the two-headed and four legged Modulok bodies he would be more interesting but, as it stands, he's tough to get excited about, especially considering the prices on these guys have jumped up. This guy gets an Eh and a 1/2 from me. If you really love Modulok or are a completest on the line, go for it. Otherwise, there are four better Modulok figures out there. Snap one of them up instead!

If you're a Modulok fan, check out my reviews of the MOTUC Modulok and the ReAction Modulok A, Modulok B, Modulok C, and Modulok D.