Road to The Rise of Skywalker: First Order Jet Trooper from Star Wars: The Black Series Phase III by Hasbro 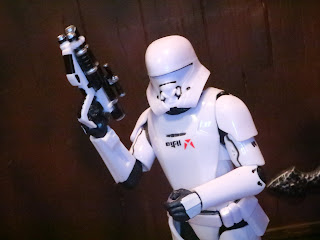 Guess what? This is my first review of a figure from the upcoming The Rise of Skywalker! How crazy, right? We've had at least a dozen books over the past few months, the premiere of The Mandalorian, and the launch of Star Wars Jedi: Fallen Order. Next up on the list: The Rise of Skywalker. Yeah, I'm being cautious but I'm hoping for the best with this one. Right now I'm just going to focus on a new trooper type for the ranks of the First Order. The Jet Trooper (also called Rocket Troopers) aren't a new concept at all. Heck, First Order specific Jet/ Rocket Troopers appeared in the first issue of the Poe Dameron comic back in 2016 and in 2017's Star Wars Battlefront II. This guy is part of the second wave of figures released since Triple Force Friday, so he's really just starting to show up in decent numbers. Let's check this guy out after the break... 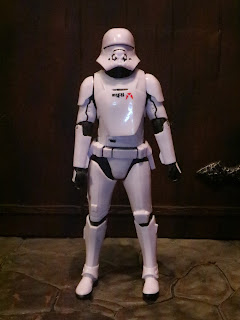 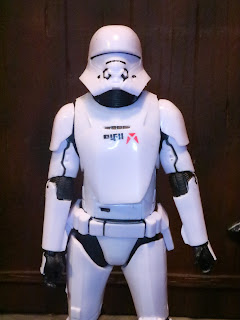 * At a glance the Jet Trooper doesn't look incredibly different from a standard First Order Stormtrooper but it turns out this guy is a completely new sculpt. The details are crisp, the paint apps are clean, and the armor is a very beautiful, very brilliant white. Seriously, he looks like he just got resurrected after killing the Balrog. It's a slick looking figure. 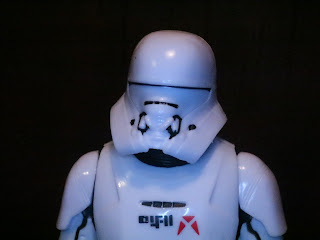 * The helmets are kind of odd on the First Order Jet Troopers, but that's been the case with many of the specialized First Order troops. I think it's a throwback to some of the Ralph McQuarrie concept designs for the Stormtroopers from the Original trilogy. 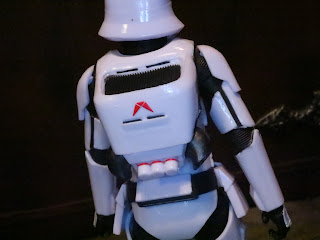 * The Jet Troopers jet pack isn't a separate piece. It's a part of his armor. It's a very sleek design with quite a few paint applications and even articulated exhaust pipes on the bottom. 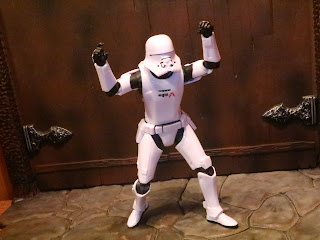 * The articulation on the Jet Trooper is way better than on the earlier First Order Stormtrooper. The range of motion on this guy is excellent and he can take some great poses. The elbows are fantastic with nice range of articulation, both his neck and head are balljointed, and the balljointed mid-torso moves quite a bit and is hidden underneath his armor. 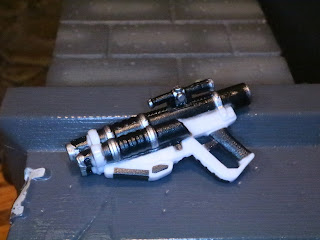 * The Jet Trooper only comes with one blaster, but it is a new one. I don't know the name of it yet but it looks like a multi-barreled pistol. It's very cool and the figure looks great holding it. 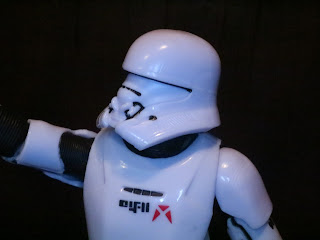 * Looking at pictures of the armor from the film, it appears that Hasbro failed to paint the black lines on the side of the helmet (you can see the indentation running from the visor to the mouth area). This isn't just a QC fluke, either, as I've seen other figures with this paint app missing. It definitely changes the look of the helmet and makes it seem a bit less realized. 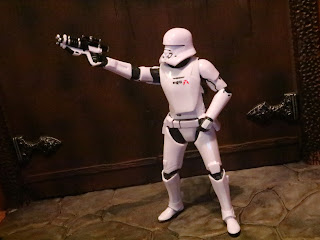 The First Order Jet Trooper isn't a bad figure at all, but he is a bit dull. It's odd to say that about an armored Stormtrooper sporting a jet pack, but it's true. This guy could have used a little splash of color, maybe a more unique looking jet pack, or another cool blaster to make him stand out a bit more. He's still a well articulated, well sculpted figure, and I'm sure folks will like him, but he's not as exciting as he could be. The First Order Troopers just don't "feel" as unique from each other as the Imperial and Clone Troopers did, which is a bit of a weakness in my eyes.