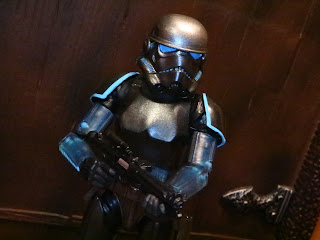 GameStop has another Star Wars: The Black Series Gaming Greats exclusive figure and this time it's a Shadow Stormtrooper from The Force Unleashed! The Shadow Stormtroopers (sometimes called Blackhole Stormtroopers) have a long history dating back to the 1970s Marvel Star Wars comics and they've most recently appeared in the new canon in Star Wars Battlefront, but this one is clearly based on their appearance in The Force Unleashed due to the grayish color of the armor and the glowing blue details (I think those ones are technically referred to as Shadow Troopers, not Shadow Stormtroopers, but that's what who this guy is). Hasbro actually released the Imperial Shadow Squadron as a Target exclusive back in 2014 but those are simply fully black Stormtroopers, so this guy is still quite different than the previously released figures. When it comes down to it, the Shadow Stormtrooper is a simple repaint of the 2014 Stormtrooper figure from series 3 of the Black Series but it does have a very color scheme that really does make it stand out from the rest of your 6 inch Stormtrooper garrison. Let's check out this guy after the break... 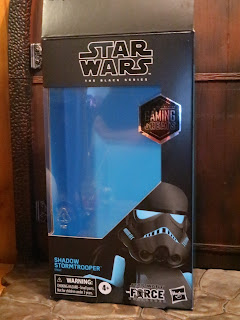 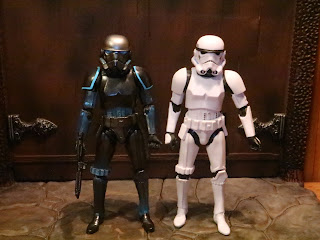 * The Shadow Stormtrooper is on the left while the standard Stormtrooper is on the right. This guy is the same as the originally released figure sculpt and accessory wise so for all of the details check out that review. Overall, this review is covering a repaint and essentially I'll just be pointing out the unique details and improvements here. 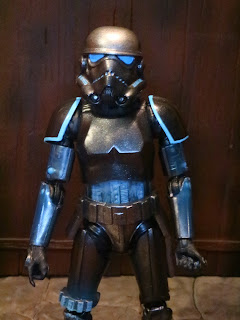 
* While this is the exact same mold as the standard Stormtrooper figure we've seen many, many times, the black and neon blue color scheme is excellent and really makes this guy stand out on the shelf. There's really not another Black Series figure with this color scheme so he's pretty unique. It appears to me that the figure is mostly molded in clear blue plastic with the blackish/ gunmetal colored paint sprayed over it. It gives the guy a rather interesting look, especially in the places where the clear plastic is fully visible. 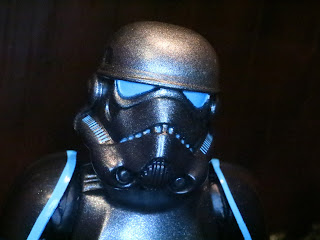 * The helmet is the same sculpt but that black and blue looks fantastic. The top of the helmet is more of a gunmetal/ silver rather than black, giving the Stormtrooper an interesting, multicolored appearance. 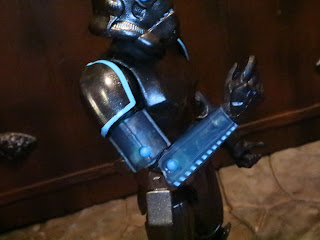 * Here's a closer look at the translucent arts. It's really cool to be able to see inside of the figure! Th only thing you're going to see is the figures internal construction but it actually looks really good in person! 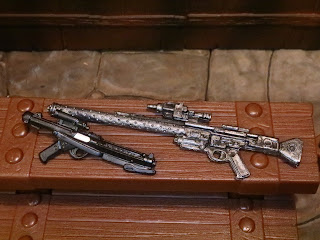 * The Shadow Stormtrooper comes with the same two weapons that nearly every other Stormtrooper does: An E-11 blaster and a DLT-20A rifle. I'm glad to say that the E-11 has a paint application on the receiver and the DLT-20A has a nice weathered drybrush effect. Also like on the rest of the Stormtroopers the E-11 can fit in the holster on the trooper's belt. 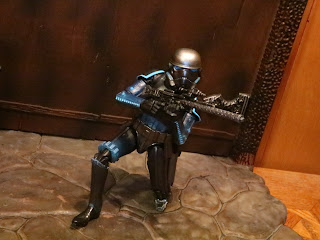 * This guy is still quite well articulated and the newer, firmer plastics Hasbro has been using are way better than the plastic on the original releases. Those guys were kind of rubbery but this guy is nice and firm.

*The shoulder pads are still fairly obtrusive and really need to be reworked. Hopefully this will be fixed on the upcoming "Rogue One" Stormtrooper release. 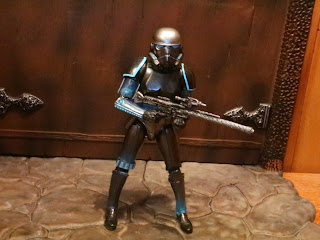 I'm giving the Shadow Stormtrooper a Great rating. He's still a very good figure, like the original release, but with the addition of the cool translucent blue body and black paintjob. He's a bit more expensive than your average figure, however. While nearly everyone sells their Black Series figures for around $20 dollars (and sometimes a dollar or so less), GameStop has been jumping up their prices. The first Gaming Greats releases were actually marked in stores at $29.99 (preorders were $24.99) but fortunately these guys are still $24.99. That's pretty high for a repaint and it does hurt this guy a bit. Still, he's pretty unique and well worth tracking down if you love Stormtroopers!