Action Figure Review: Skeletor #998 from POP! Television: Masters of the Universe by Funko 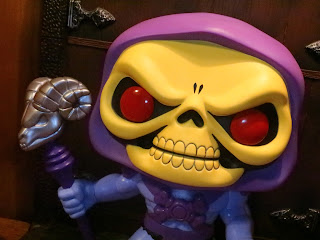 Today we're going BIG with a review of the new Funko POP! Skeletor and it's not just because Skeletor is one of the biggest baddies of them all; it's because this is a supersized Funko POP! Skeletor stands around 10 inches tall and is really quite massive. My daughter received the Target exclusive supersized Eevee POP! for Christmas, so that was my first in-person experience with the supersized POP! vinyls, but this Skeletor is the first one I've personally owned. He's quite cool! The POP! aesthetic works really well in this scale and all of the little details just look better. Funko has made a few Funko Skeletor POP! vinyls with the first being one of the earliest POP! Television releases back in 2013. This one is an update of the classic Skeletor design and I imagine we'll see him released as a standard sized POP! sometime soon (there is also a Black Hood/ Disco Skeletor repaint of this guy released as a Funko Shop Exclusive). Let's take a look at this massive Skeletor POP! after the break... 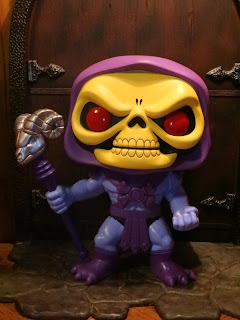 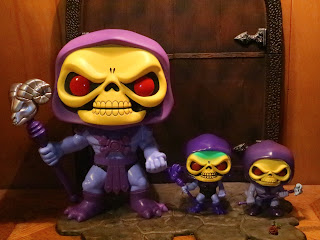 *On the left is Skeletor #998 who I'm checking out today while the previously released Battle Armor Skeletor #563 is in the midle and the original Skeletor #19 is on the right. This large super-sized Skeletor uses the same head design  as the Battle Armor version (though obviously larger) but the body is a new design. 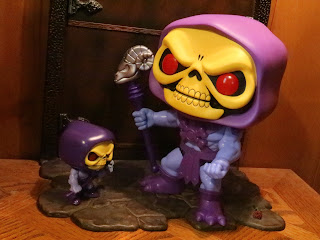 
* The first thing about this guy that just grabs your attention is how large he is! Yeah, he's only 9 1/2 inches tall, but he's really quite bulky. He's really heavy, too. There's something really appealing and very eye-catching about a POP! this big! 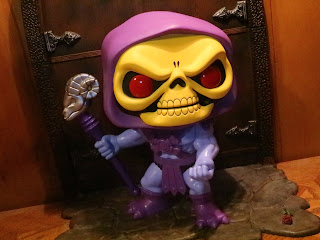 * This is a really awesome looking Skeletor, too. While he's much larger than your standard POP! vinyls his design is real improvement from the previous figure. I love the sideways fist (Skeletor looks like he's explaining some evil scheme to his minions!) and, as always, the ability to turn the head to give the figure a bit more of a personalized feel. 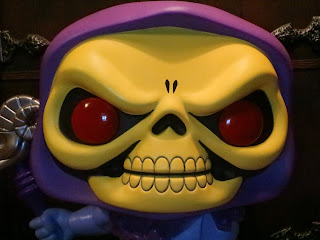 *The headsculpt is really goo here. I love this look much more than the first POP! Skeletor's portrait. The yellow of the skull really pops here and the individual teeth and red eyes complete Skeletor's gruesome visage perfectly. I know most collectors don't tend to think of Funko when they think of impressive sculpting but there really is something quite impressive about the stylized work here, especially when seen in this scale. 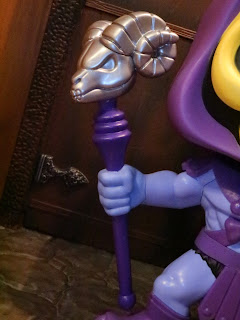 * Skeletor always has to come with his trust Havoc Staff, doesn't he? The details on the headpiece are fabulous! I really like the use of silver here, too. It reminds me of the 200x Skeletor's Havoc Staff. 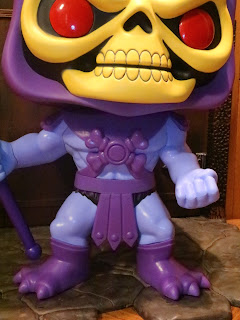 * Skeletor's armor is nicely detailed and the paintwork is clean. This has a great aesthetic to it and the larger size really helps you to appreciate it. 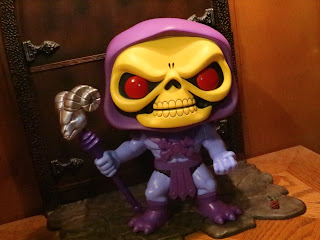 I'm loving this guy! He's a really impressive Skeletor toy and the larger size is incredibly fun and makes for a nice display piece that will definitely catch anyone's attention. He might be pricier than your average retail pop but considering how heavy he is and the size you really feel like you're getting what you paid for. I wouldn't want a whole line of massive POP! vinyls but it's fun to have an A-list character like Skeletor to show off. He's a Great POP! vinyl, especially because of his overwhelming size! Now he can crush He-Man!