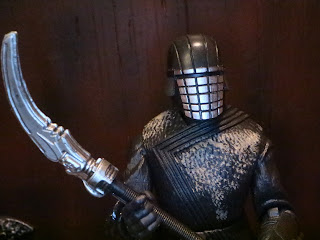 I've been picking up the most recent figures from Star Wars: The Black Series here and there and I finally grabbed the Knight of Ren figure a week or so ago as an Amazon Warehouse Deal (messed up packaging but the figure was fine) so let's check him out today! I could spend the better part of a day talking about the Knights of Ren and how oddly they were handled in the Star Wars Sequel Trilogy as they're a great example of one of the weird issues with the films. Introduced only briefly in The Force Awakens and the ancillary materials for that film, the Knights of Ren seemed like they were going to be one of the big mysteries of the ST, or at least a big "reveal". Nope. In The Rise of Skywalker they pretty much show up only to later be killed by Ben Skywalker. What's their deal? That was dealt with in a comic book, which is fine for some things but it seems weird for some enemies who seemed like they were going to be important and who had a relationship to Kylo Ren that was teased for a few years.
There are six Knights of Ren but Hasbro only released one of them in the Vintage Collection (Ap'lek) and another here in the Black Series. This one is named Vicrul and he's depicted on the cover of The Rise of Skywalker's visual dictionary though Hasbro just labeled each release "Knight of Ren," presumably because the packaging was created before they knew the characters' names (Funko identified their individual releases by referring to the weapon of each Knight of Ren).  Per the visual dictionary, his limited Force connection gives him "heightened reflexes and the power to magnify fear in his prey." That's pretty cool and really makes it frustrating that these guys weren't explored more. Heck, if they hadn't died in TROS it would have been cool to see a follow-up series about Rey and the Resistance hunting down the Knights of Ren. Let's check out Vicrul after the break and see if he's a worthwhile pickup... 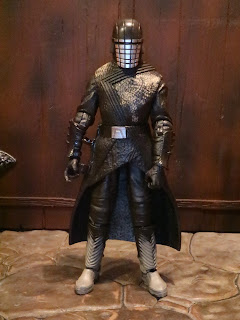 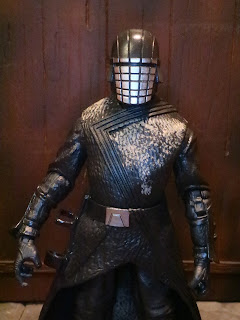 * It's a shame that we didn't see more of the Knights of Ren and that Hasbro didn't release all of them in the lead up to the film as these guys have some very cool designs. While they're all dressed in black and silver, they all have a unique outfit. Vicrul wears a reptile skin trench coat with armored bracers and greaves. The coat is actually two separate pieces made from a rubbery material that fit over Vicrul's chest and waist. While his articulation is hindered by it a bit, it's all still there and functional. There's quite a bit of weathering on the coat and boots, too, though I'll address that more in a minute. 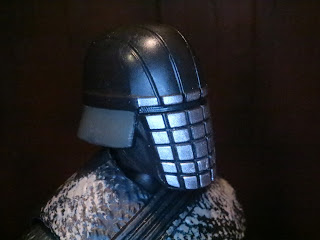 * I've seen Vicrul's helmet referred to as a "grenade" helmet due to the resemblance of the individual panels to the serrated shell of a  fragmentation grenade. It's a very Dark Side styled helmet that resembles Kylo Ren's helmet to some extent while also taking cues from Darth Vader. 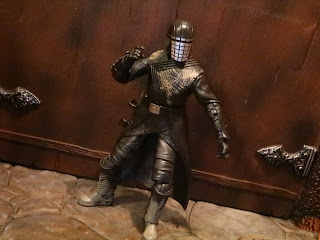 * While his coat hinders his articulation a bit, overall Vicrul can still move like most other Black Series figures. The joints all have an excellent range of motion although, oddly enough, he doesn't have double hinged knees. Instead, he has swivel/hinge knees. That makes him a bit unusual for a current Black Series figure but they work OK (with his coat he can't kneel anyways). 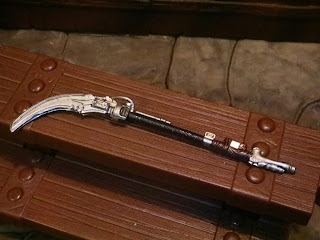 * Vicrul's weapons are pretty nicely done with lots of paint details. His primary weapon is a scythe that is augmented with an ultrasonic generator. The sculpt and paint are fantastic on this! 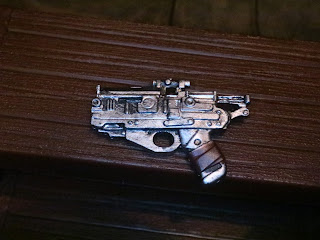 * His second weapon is an amazing looking blaster pistol. Again, very detailed sculpting and an excellent wash really bring out the details. 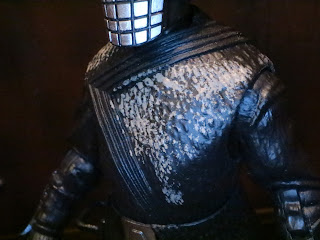 
* Vicrul has a lot of weathering on him but it looks really overdone on his chest. It looks like dried mud caked on rather than dust and dirt from battle. If it was a bit more subtle it would have looked excellent. 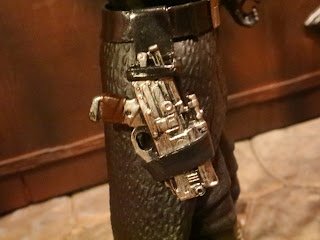 * Vicrul's holster is a but frustrating. It's a simple loop for the barrel of the gun and a simple loop at the top to hold it in pace but the top loop feels a bit fragile. Be careful! 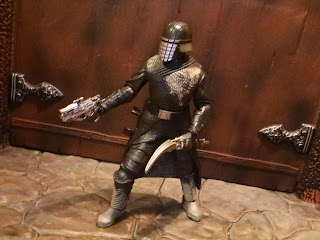 The Knight of Ren/ Vicrul is a pretty cool figure and I'd give him a Good and a 1/2. He's not one of the best Black Series figures but he's worth considering, particularly for the cool weapons. Honestly, though, this guy probably would have moved a lot more units if he had the rest of the Knights of Ren with him. Considering how we've seen Hasbro handle the Disney Era films, I really doubt we'll ever seen any more of the Knights of Ren, at least for quite some time. That's one of the things that really separates Star Wars now from Star Wars in the past. It used to feel like it was always just a matter of "when" we'd see a character from the films, now it's a matter of "if."