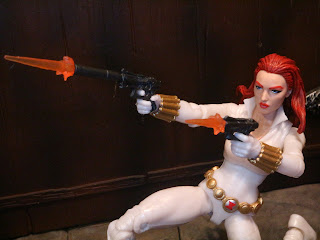 It's been 7 months since I last reviewed a Marvel Legends figure! Hasbro continues to put out some amazing Marvel Legends figures but I'm kind of selective about which Marvel Legends figures I pick up. The Target exclusive Deadly Origin Black Widow featuring Natasha Romanoff in a slick white outfit with lots of guns and firing effects definitely grabbed my attention, though, and thus she broke the streak for me. I'm only vaguely familiar with most Marvel comic storylines unless they're pre-2000 or were featured in a Marvel Cinematic Universe film, so I'm not terribly familiar with the 2009/ 2010 Black Widow: Deadly Origin by Paul Cornell, Tom Raney, and John Paul Leon. This figure is based on that miniseries and, of course, was released as a bit of a tie-in to the Black Widow film which should have been released in May of 2020 but now has been pushed back to November due to the Coronavirus pandemic. Think these will still be around when the film actually hits theaters? Let's check out the Black Widow: Deadly Origin figure after the break... 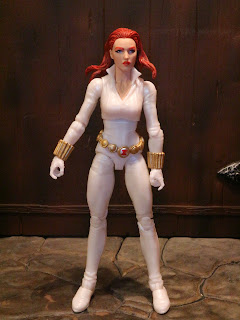 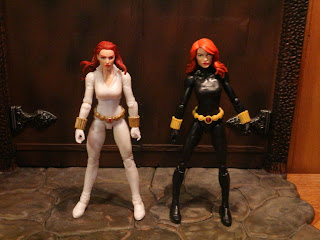 * On the left is the Deadly Origin Black Widow while the Retro Series Black Widow is on the right. They do have different bodies and headsculpts  though the belt, feet, hands, and gauntlets. I'm sure there are some other reused parts from other figures, too, but I'm not Marvel Legends savvy enough to catch them offhand. 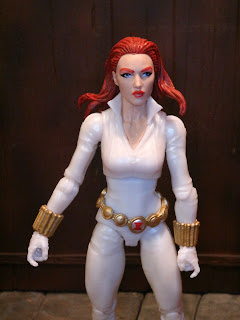 
* Usually Black Widow is wearing a black bodysuit (though she certainly wore some different colored outfits in Infinity War and Endgame) but this white bodysuit struck me as quite unique. It's a fairly nondescript spy suit with a collar and some simple seams. It looks really good with Black Widow's gold accoutrements, however, and the overall look of the figure is quite striking. 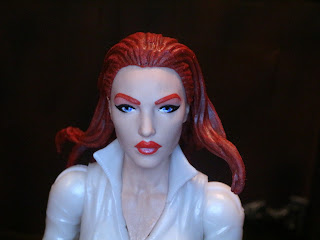 * The headsculpt is quite nice and I don't recognize it from anywhere. Natasha has a stern but lovely face and her hair looks fantastic. I like the very dark red color and how her hair is pulled back as if it is being blown by the wind or as if she is in the middle of battle. 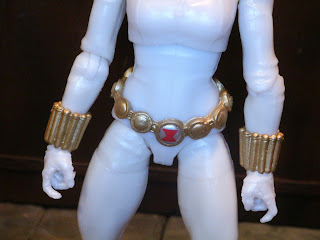 * They're not removable but Black Widow's gauntlets and her belt are separate pieces over the main body. They're reused from previous Black Widow figures but they look fantastic and they give her a great pop of gold color that looks fantastic against her white outfit. 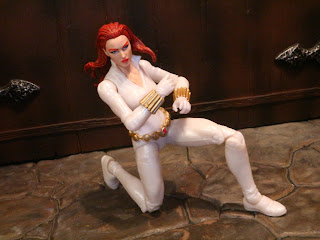 * Hasbro's Marvel Legends figures always feature pretty solid articulation and Black Widow is no exception. It's exactly what you'd expect from this line meaning you're getting lots of movement and great durability. The Marvel Legend Series continues to be one of the most fun lines out there at mass retail today (although I think Hasbro's Star Wars: The Black Series line has eclipsed Marvel Legends in the articulation department). 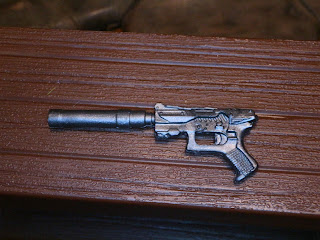 * Black Widow comes armed with this release and first up is this cool silenced pistol. It's a great sculpt and it's nicely molded in a gunmetal colored plastic. Slick and silent, baby! 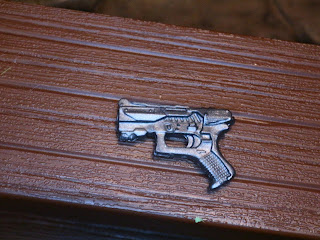 * Next up is a standard version of the pistol for those times when Natasha doesn't care if she causes a racket. 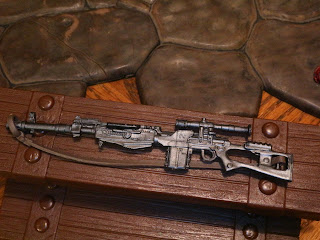 * Her third firearm is a very cool sniper rifle. It looks like a variant of a Russian Dragunov sniper rifle. It's got lots of sculpted detail and a functional (and removable!) strap for toting the rifle around. 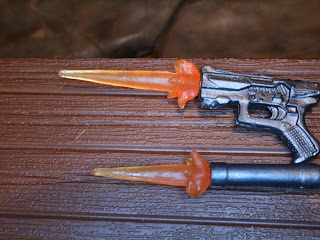 * One of the coolest features of the set is that Black Widow comes with two firing effects. Both of these (a shorter and a longer burst) can fit in the barrels of both pistols and the sniper rifle. They look excellent and really give the figure a more dynamic look when on display. 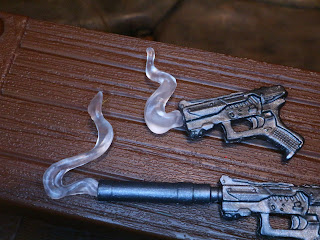 * The other really unique feature are these two smoke effects. They're both differently shaped and, like the firing effects, can fit in either pistol or in the sniper rifle. These are really, really cool looking! 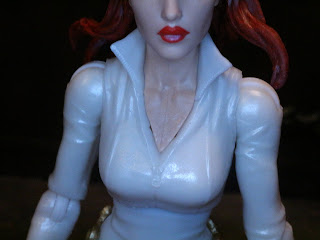 * I do have a few issues with this figure, the first of which is the with her chest. It seems like her chest and neck are a separate piece attached into her torso. That would be a pretty good idea except there are some very obvious gaps between her chest and the suit, which looks kind of odd. 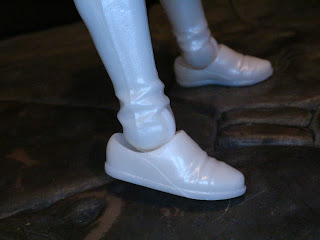 * The ankles are swivel hinge ankles, like most other recent Marvel Legends figures, but they seem to have a ratchet system. That's not the problem in and of itself but it seems like the ratchets get stuck in off places, thus not allowing me to get Black Widow to stand up in the way that seems most natural. 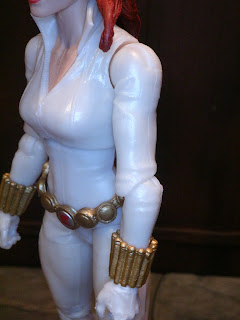 * The biggest issue with my figure, though, is that her left upper arm is actually incorrect. She has two left shoulders/ upper arms, thus you either have her shoulder sticking out oddly or have her elbow range of motion blocked. This is a QC error for sure, not something I see as often these days. If I ever get a chance I'd definitely swap her out for a corrected figure for sure. 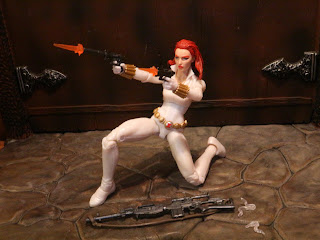 Having two left shoulders is definitely an issue with my Black Widow but, fortunately, it is a fairly easily workaround and it doesn't seem to be a widespread issue or anything. Besides the problems I mentioned, this really is a cool figure with some excellent accessories. The firearms with the removable smoke and firing effects are just too much fun! There are some really impressive Black Widow figures out right now and next I'm trying to track down the Walmart exclusive Black Widow. This one is a Great figure, particularly if yours has normal shoulders. Just give it a once over before you buy, though I admit it escaped my gaze.


This is actually the first figure of Black Widow/ Natasha Romanoff I've reviewed. For more Marvel Legends Series figures check out the following: