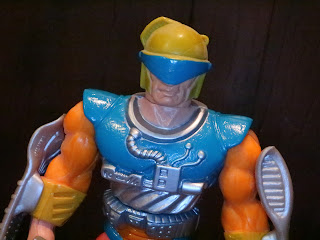 JuNe Adventures strikes again! Today we're checking out another of the Galactic Guardians and today it's Spinwit, the heroic pilot who can generate tornadoes by spinning body! Spinwit was known as Tornado in his international releases and he was released as part of the third series of action figures in 1991. Speaking of the 1990s, man, does Spinwit look like the early 1990s or what? Seriously, he looks like he ought to be rollerblading down the road listening to New Kids on the Block on a walkman while eating a Butterfinger and telling someone to eat his shorts. Overall He-Man kind of avoided the 1990s (both the good and the bad), but not Spinwit. I mean, dang. Let's check this guy out after the break and see if this guy is a worthwhile addition to the collection... 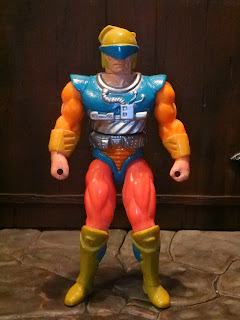 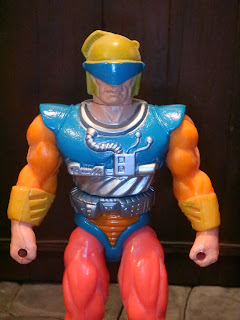 * We're going to talk about Spinwit's neon color palette in a few minutes but for now let's talk about the overall look of the figure. Spinwit really does have some nice sculpting here, as do most of the New Adventures figures, which shows off lots of technical doodads and such. He has a low of different textures on his outfit and various details like belt pouches, wires, and armored bits. 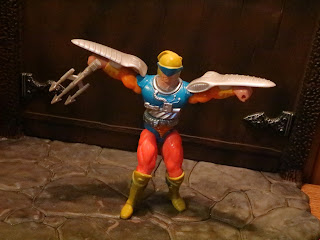 * Spinwit does have an action feature that affects his articulation but overall it doesn't render him unplayable. He still has moveable knees and hips and swivel shoulders. Oddly enough his head doesn't rotate. Everything else is good, though, and he's a fairly fun toy.


* Here's a brief video of Spinwit's action feature! It's actually pretty cool and will definitely knock down some of the Evil Mutants. 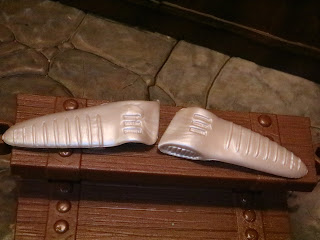 * Spinwit comes with two Spin Shields that can attach to his arms. I initially thought Spinwit himself generated tornadoes but looking at these things, maybe they allow him to generate the tornadoes? Or maybe it's kind of a 50/50 sort of thing. They're quite cool and they definitely make the figure look better when he's sporting them. 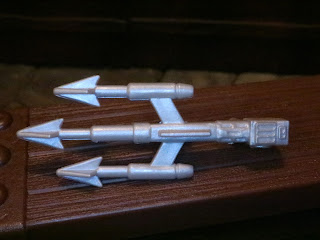 * Remember when I said Staghorn's weapon looked like it was from the Captain Power toyline? Well guess what? Spinwit's "spear-rocket trident" is actually from Captain Power! The 1988 Captain Power figure Col. Stingray Johnson came with this exact same weapon! I'm surprised Mattel didn't reuse more Captain Power accessories in this line, to be honest. It is a cool piece but what is the deal with all of these space guys using harpoons and arrows and stuff? 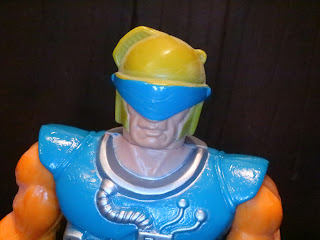 
* Most of the "He-Man" figures for the Galactic Guardians feature removable helmets but Spinwit doesn't get one. It ends up making him seem kind of boring, too. I don't know. He's just kind of dull. 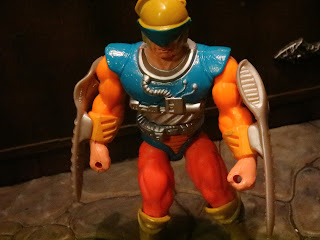 * Want to hear something weird? My Spinwit has two of the same shields! I initially thought this was a mistake (my figure was removed from packaging, so I know this is his original accessory complement) but after looking at pictures of other Spinwit figures in various archives I realized that it seems like Mattel really did just include two of the same shields. That doesn't match the packaging art, though. 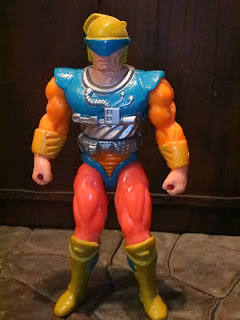 * Yeah, we gotta talk about the colors. Wow. Spinwit is bright. I mean, neon orange sleeves with yellow bracers? Pink pants? Prince Adam called, Spinwit: He said tone things down a bit! Lisa Frank called and said she needs some sunglasses because you're giving her a headache. The Toxic Crusaders called and said you need to try some earth tones in their, bro. Seriously, this guy is absolutely garish. Yikes! I love colorful figures but Spinwit takes it too far.

JuNe Adventures is totally about celebrating the 1989 He-Man/ New Adventures toyline and I'm trying to look at the good and the bad. Karatti might be the worst of the Evil Mutants (and he's not all that bad) but Spinwit/ Tornado is definitely the worst of the Galactic Guardians as far as I'm aware. He does have a cool action feature, so I'll give him that, but the crazy colors mixed with a fairly bland design definitely leave me cold on this one. Cold but with scorched corneas. Spinwit is an Eh and a 1/2 figure and an easily skipped member of the Galactic Guardians.


This is the first and only figure of Spinwit / Tornado released. For more reviews from Mattel's He-Man line check out the following: