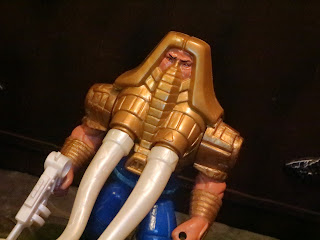 Today is the last day of JuNe Adventures and I really hope that you've enjoyed the chance to go back and look at a random mixture of action figures from Mattel's New Adventures of He-Man brand extension. The vintage He-Man line certainly has its own charm which is often overlooked because the figures are so aesthetically different from the vintage Masters of the Universe line. I've said it before and I'll say it again: I still wonder if the line would have done better if Mattel had attempted to adhere more the aesthetics of the vintage MOTU line, treating the Galactic Guardians and the Evil Space Mutants more as new factions rather than as "replacements" for the original crew. Stylized figures like Playmates Teenage Mutant Ninja Turtles were all the rage in the late 80s/ early 90s and were closer in design to the vintage MOTU line than to the fairly standard proportions that Mattel used here. Today I'm looking at Tuskador (known as Insyzor in Europe). Tuskador was released in 1991 as part of the third series of the He-Man line and he is a character that absolutely screams MOTU. Let's take a look at Tuskador as out last figure for JuNe Adventures! 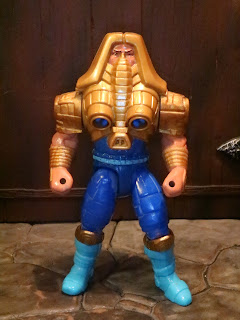 Accessories: 2 tusks and a laser pistol. 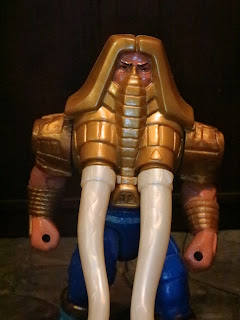 * Tuskador has always reminded me of Ram Man due to his status as the bulky bruiser of the Galactic Guardians. He's also got that armored helmet which only exposed part of his face and some serious shoulder armor, too. Oh, and those giant tusks coming out of his helmet. They're not really his teeth or tusks or anything (he looks pretty normal under his helmet in the cartoon series) but just part of his elephant styled armor. Seriously, it wasn't until a few years ago that I recognized the trunk that runs from his face mask down to the elephant like nostrils down on his lower chest. What's that for? I wonder if his voice bellows out of there? That'd be a pretty cool intimidation technique in battle for a guy like this. 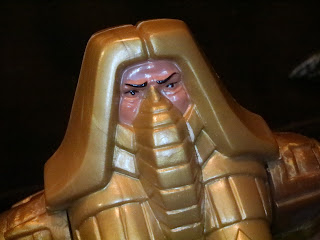 * I really like the helmet and face sculpt on Tuskador. He doesn't have a separate head like most other He-Man figures but the work here is pretty impressive. What little we can see of Tuskador's face makes him look like a pretty tough dude. 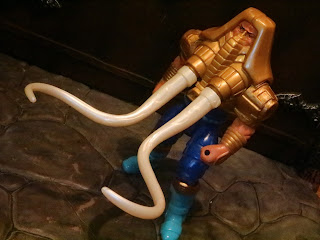 * Most of the He-Man/ New Adventures figures had pretty pedestrian action features that didn't live up to the craziness of the later years of the vintage MOTU line. Tuskador shines, however, and might have one of the best MOTU action features of all. The action feature starts with these massive tusks,however; they're molded in a pearly white color that gives them the look of ivory and they look rather sharp, too. They make for great (if unwieldy) offensive weaponry. 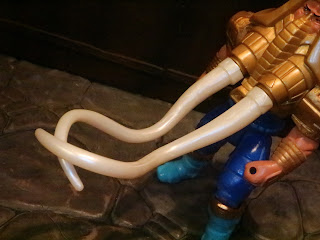 * With a flip of the switch on Tuskador's back his tusks can rotate, allowing him to capture an enemy. Capturing tusks for a guy with elephant themed armor? That's straight up MOTU right there, isn't it? The feature works very well and is quite fun to play with when you're having Tuskador battle! 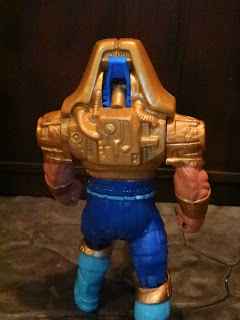 * Mattel really added a lot of sculpted detail into these figures and Tuskador doesn't disappoint. The back of his armor is covered with greeblies, tubes, and ports. (The big blue tab is what makes his tusks rotate, by the way). 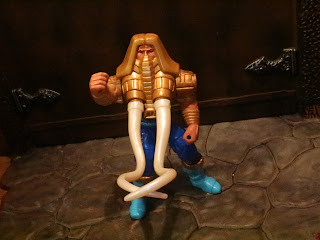 * Tuskador has pretty much the same articulation scheme as most other He-Man figures although there are no spring activated features to interfere with standard movement. He also feels a lot sturdier than most other figures too, making him more fun to play with and pose. 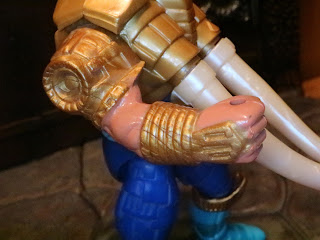 * I gotta show off Tuskador's arms. Is he jacked or what? Those are some cool shoulder pads, too. 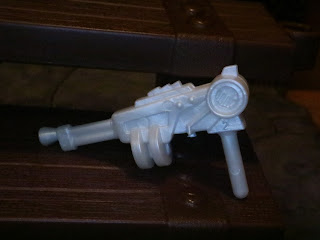 * Tuskador also comes with this cool laser pistol. He can hold it in either hand and it looks great with him as it matches the color of his tusks. 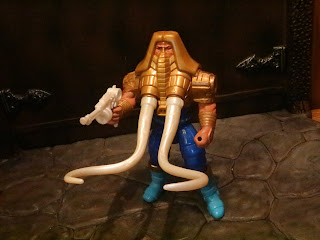 Tuskador is another of my favorite figures from Mattel's He-Man line. So many of the Galactic Guardians are fairly plain and could easily pass for G.I. Joe or Captain Power characters. Tuskador is clearly a Masters of the Universe character, though, and his crazy design and clever action feature make for a fun toy. Tuskador was another figure I originally picked up during a memorable childhood trip to the Gurnee Mills mall and while this isn't my original (I bought this one about 10 years back) I still think he's an Epic figure!