JuNe Adventures: Intergalactic Skeletor from Masters of the Universe Classics by Mattel 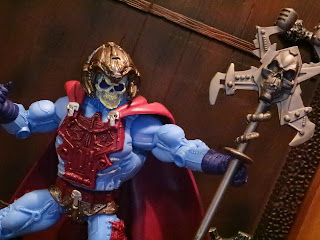 August 2014 was a busy month for Masters of the Universe Classics and, for some reason, I didn't end up reviewing all of the figures that were released at that time! I review the standard monthly figure, Flutterina, a few months after she was released but never got around to Madame Razz from Club Etheria and the SDCC exclusive Filmation Hordak. Skeletor was the quarterly variant figure for the month and was a figure I remember being very excited about. Unfortunately, he came at a time when there were lots of minor quality control issues working their way into the line. Nothing major like breakage, certainly, but weapons with no paintwork, reversed shoulders and forearms, and the crudely named "fat armor" that left many figures looking overly puffy all plagued Skeletor. It's a shame, too, because this really is an excellent Skeletor variant. I know that the New Adventures of He-Man isn't everyone's favorite era of MOTU (it's not mine, either) but Skeletor was awesome. No, I didn't care for the Jetlag cartoon version of Skeletor with googly eyes and a bizarre voice, but I love the toy design. Taking a cue from the vintage Laser Light Skeletor at the end of the vintage line the New Adventures Skeletor depicts a new era in the life of a villain willing to do whatever it takes to attain power. After magic and sorcery don't get him what he wants it seems logical that Skeletor would be willing to become cybernetic to continue his evil schemes! Let's take a look at this figure and see if he was a worthy adversary to the excellent MOTUC Galactic Protector He-Man and She-Ra.... 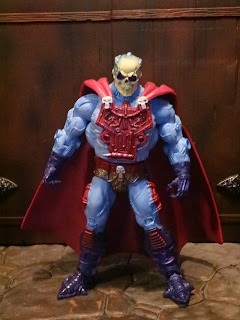 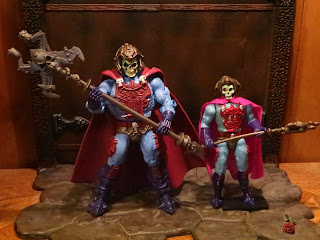 * On the left is the MOTUC Intergalactic Skeletor while the original figure from series 1 of the 1989 He-Man line is on the right (he was just called Skeletor). Mattel used mostly new parts for the MOTUC version to very faithfully replicate the vintage figure and they did a great of it. I still haven't reviewed the original figure on here. Maybe someday soon? 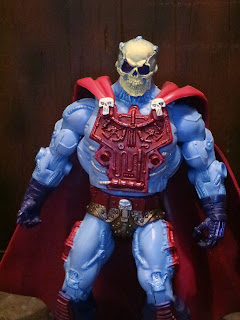 
* Skeletor is a wonderfully grotesque blend of magic and technology! He's still Skeletor  and has a similar color palette to the classic version but the magenta replacing the purple definitely gives him a slightly different feel. It fits a sci-fi Skeletor so much better! Most of the figure is unique with the detailed torso being an "armor" overlay covering the torso rather than a uniquely sculpted torso (it's glued on and not removable though). The cape is also non-removable though it looks great. I love the skulls that attach the cape to Skelly's chest armor. 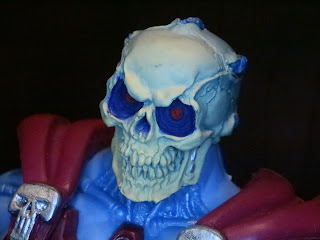 * The headsculpt is amazing. While the standard MOTUC Skeletor headsculpt is good and perfectly captures the classic toy, this one offers up something entirely new. It's way more "skull-like" and the level of detail is amazing. Honestly, it's one of the coolest portraits in the line. The recessed eye sockets with the red pupils deep inside look amazing! The wash also fully brings out the details. Perfection! 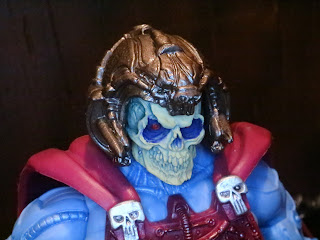 * Like the vintage figure, Intergalactic Skeletor also comes with a removable helmet. It's an excellently sculpted piece and it really completes the look of the figure. It fits on his head quite nicely, too. Many of the MOTUC figures had alternate helmeted heads rather than actual helmets, so that makes this a bit of an unusual accessory. 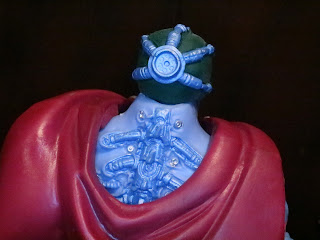 * The back of Skeletor's head is really cool, too. Not only can you actually see his spine (well, a cybernetically enhanced spine) but there's also a weird port of sorts on the back of his head. This kind of stuff really makes the New Adventures concept work for me as it's such a cool blend of sci-fi and fantasy, kind of like Star Wars. 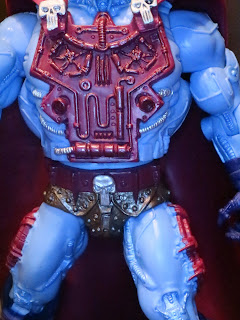 * Here's a close-up view of the crazy detail on this guy! The chest plate, the metal space briefs with a skull buckle, and the electronic panels wired into Skeletor's skin are all excellent. When it comes to the detail in the sculpt Intergalactic Skeletor is definitely one of the most impressive figures in the entire line. 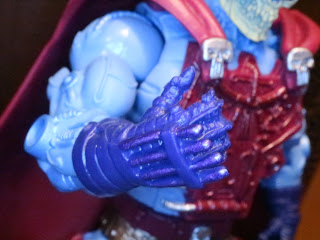 * Those hands are awesome as well. While Mattel wasn't yet doing swivel/hinge wrists in the MOTU line Skeletor still had some amazingly sculpted hands. I love the pronged knuckles. Maybe some sort of weapon mounted to his hands? 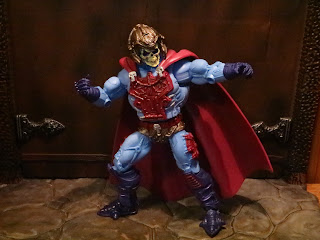 * Skeletor is missing the rocker ankles and boot swivels, and his mid-torso joint is pretty ehavily restricted, but he's still fun to pose and play with and a very durable toy. Mattel's MOTUC figures are nearly all exceptionally sturdy and really feel like toys you can pick up and fiddle around with over and over with no fear of breakage. The quality is excellent for sure. 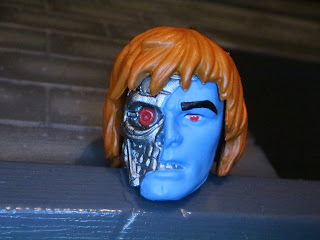 * One of the coolest things about MOTUC was the way Mattel included accessories for previously released figures with certain new releases. To help boost Intergalactic Skeletor's sales he comes packed with a battle damaged head for Faker! While this is a pretty popular look for the character now (it's shown up in Mega Construx and in the Mondo 1/6th scale figures) at the time it was a new and cool look for the evil robot. I've always displayed mine with the Battle Armor Faker from the MOTU vs DCUC 2-pack. 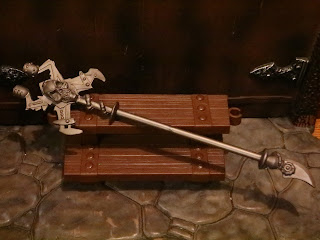 * Last, but not least, Skeletor comes with his cool intergalactic Havoc Staff. This thing is a wickedly sculpted item! It's quite large, too (maybe a little too large?) but the detail is astounding. It could have used a paint application or two although it does match the vintage toy quite well. 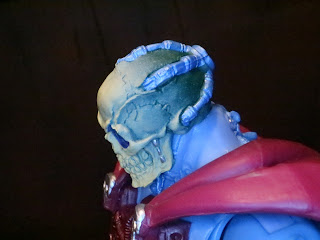 
* Skeletor has a weird problem with his neck: He's always looking down! This is actually due to the way the "armor" overlay sits over his chest and impedes range of motion for his head. He really needed a longer neck peg. 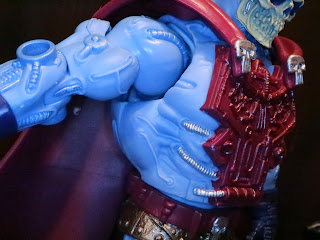 * Later in the line many of the MOTUC started dealing with armor that was too thick. Dubbed "fat armor" by fans, it tended to give the figures a bulkier feel that seemed less muscular and more... not-muscular. It was really bizarre at the time how the earlier armor in the series was both removable and fit so well while many of the later figures had armor that bulked out their sides a bit and wasn't removable. 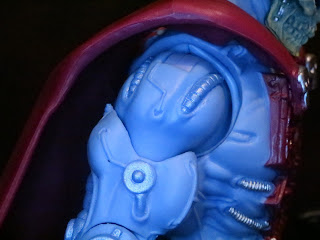 * I'm going to point out that Skeletor has reversed shoulders. It doesn't bother me that much but it does bother some people and it was a constant problem throughout the line! 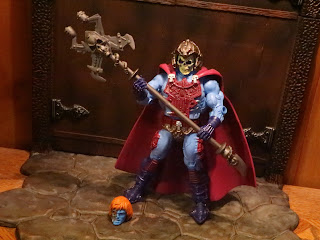 While Skeletor has the sculpt, paintwork, and the extra Faker head all pushing for him to be one of the greatest MOTUC figures in the line, those little flaws still held him back. He's still a Great figure but there were just some weird little design errors that kept him from perfection. While there were three Skeletor figures in the vintage He-Man/ New Adventures line, Mattel only got around to this version of Skeletor. He's a great representative of how cool the New Adventures era of Masters of the Universe can be, however. He might have been produced in crazy numbers, though, as you can still find this guy at Big Bad Toy Store for less than the original retail price!

Are you a fan of the man known as Faker? Then check out my other Faker reviews:  The Mondo exclusive Faker, the VINYL Soda Faker, the M.U.S.C.L.E. Faker from the Series 3 Pack C, the Ultimates He-Man (which came with a Filmation Faker head), the Faker figural bag clip, the Mega Construx Faker from the Battle for Eternia Collection and Faker from Battle Bones, the Masters of the WWE Universe Faker John Cena, the ReAction Faker and Leo Faker, and the VYNL Faker.