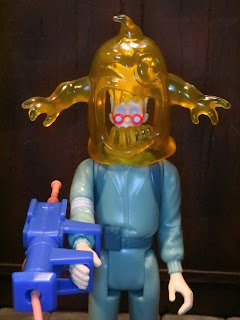 It's been nearly a month since I found Winston Zeddemore from Hasbro's Ghostbusters Kenner Classics line but last Friday I stumbled upon the other three Ghostbusters while out on a grocery run so I'll be checking them all out in the days ahead. Let's check out Egon Spengler today! Out of all of the character redesigns for the Real Ghostbusters cartoon Egon's has always seemed to me to be the most drastic. None of the Real Ghostbusters really looked like their actors but cartoon Egon's blonde do and round red glasses really seemed like a drastic change from Harold Ramis's Egon. Still, the cartoon did a great job in casting Maurice LaMarche as Dr. Spengler and Egon's unique look just became part of the character. Looking back, Kenner's vintage The Real Ghostbusters line offered up some of the most cartoon accurate toys of the 1980s (the Filmation's Ghostbusters line was incredibly accurate to their cartoon as well). While Hasbro anticipated releasing these Walmart exclusive retro replicas alongside the marketing blitz for the theatrical release of Ghostbusters: Afterlife, these guys still seem to be selling quite well on their own. Let's check out Egon Spengler and Gulper Ghost after the break... 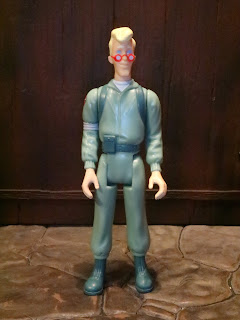 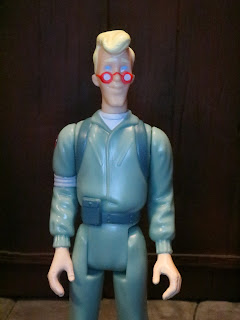 * Like I said in Winston's review, I'm not sure that I would consider the sculpts on these figures as amazing or anything but they certainly did an admirable job of capturing the look of the Ghostbusters from the cartoon "The Real Ghostbusters." The cartoon series redesigned all of the characters, giving them their own uniquely colored jumpuits (although they didn't color the collars). Egon's is grayish-green and it doesn't have as many wrinkles as the other guys' suits. Egon either irons more or his suit fits more snugly do to his taller build. The straps for the Proton Pack are sculpted on as part of the figure, as is a pouch on his belt. 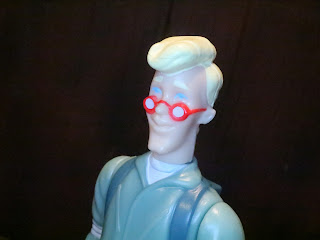 * The headsculpts seem fairly accurate to the original toys although there are definitely some minor differences. Still, it looks like Egon and those red glasses sure do stand out! 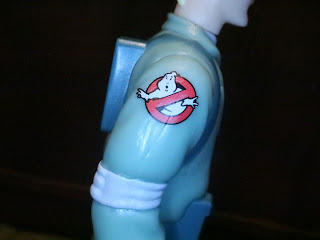 * The Ghostbusters logo on Egon's right shoulder is very neat and clean. It looks fantastic and helps bring the team together as a cohesive unit. 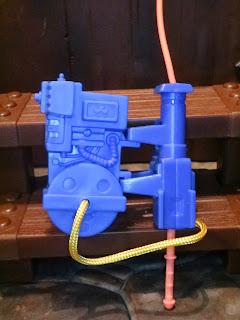 * The Proton Packs really are pretty cool in this line and nicely capture what we saw in The Real Ghostbusters. There's quite a bit of detail here, too. The Neutrino Wand (Kenner called it a Nutrona Blaster)is attached via a yellow cord, which I love. It's a string so it won't bend or break over time. The Neutrino Wand fits securely on the backpack, though the stream isn't detachable so it makes toting the pack around kind of awkward. The pack plugs into the back of the figure and stays on quite well.The plug is actually improved from the vintage toys and seems much less breakable. 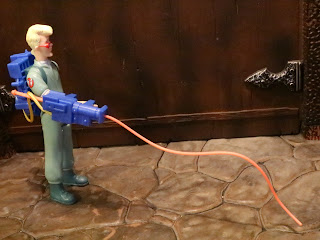 * To further give each figure their own unique feel Kenner gave each Ghostbuster a differently colored particle stream (Egon's is pink!). Kenner called these zapping rays and they can actually be spun and wiggled by turning the yellow handle at the back of the Neutrino Wand. It is a pretty cool play feature and I remember being amazed by these as a kid. 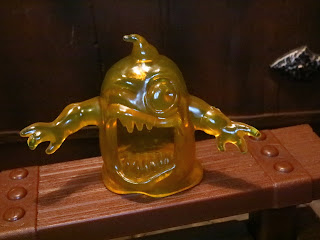 * Egon's ghost companion is the Gulper Ghost and I'm pretty sure he's my favorite of the series 1 companion ghosts from the Kenner series. I like the purple and blue colors better for Peter and Ray's ghosts but the fact that the Gulper ghost can actually swallow a character's arm or sit on top of their head always made him seem like the most fun. He's fantastic! 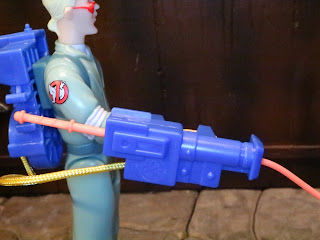 * This problem I'm getting ready to discuss is more of a problem with the vintage design rather than a problem with Hasbro's remake since Hasbro was simply being faithful to the vintage toy: I've never liked the fact that the streams are not removable. Plus, they were always very, very fragile. Seriously, these things can bend and break easily, so be careful! These feel a bit more durable and collectors should be fine, but watch out if you're giving these to a child. 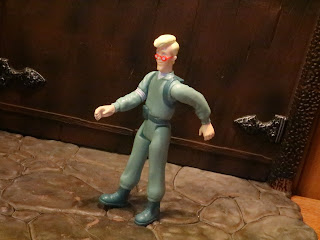 * While the articulation is faithful to the vintage toy's five points model, the Hasbro Egon feels kind of gummy and rubbery. I don't remember the vintage toys feeling like that at all. They always seemed very solid and sturdy. Egon's joints, especially his head, just seem kind of rubbery with a bit more friction than I would hope for. 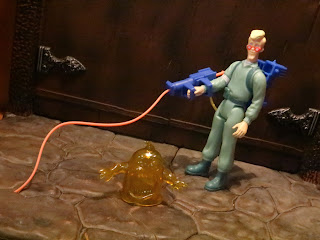 I'm so glad to be able to pick these up for the toy shelf and, for the most part, they're quite nice. They're very faithful to the vintage toys although I really don't like the rubbery feel of the figure. Still, standing on a shelf this guy looks great. Heck, most folk wouldn't even realize that this wasn't one of the vintage toys. Egon's a Good and a 1/2 collectible and whether you keep him on his card or open him and display him, he's quite nostalgic. I've been seeing these more and more lately so hopefully the distribution will satisfy the demand for these. Usually collectors' hearts skip a beat when someone utters the words "Wal-Mart exclusive" but things seem to be doing OK with this line so far.