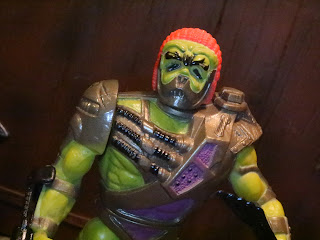 Ready to look back a another vintage figure from Mattel's 1989 He-Man line? Then join me for today's installment of JuNe Adventures as I take a look at Karatti, Evil Space Mutant and martial arts expert! When I reviewed the Masters of the Universe Karatti when he was released back in 2013 I commented that I didn't really have strong memories of the vintage figure. I never owned him and I don't really remember him. Karatti was released in the second series of He-Man figures from 1990  which features a decent selection of Evil Mutants. Karatti always has seemed kind of dull to me (he's definitely the dullest of the Evil Mutants) and that might be because he was originally intended to be a creature made of crystal called Crystoll. There's concept art of him floating around and while Karatti was based on the concept, I have to wonder if Quakke borrowed some from that concept as well, as he has some very similar colors and design elements. Let's take a look at Karatti after the break and see the good and dull aspects of this figure... 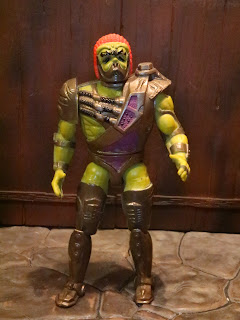 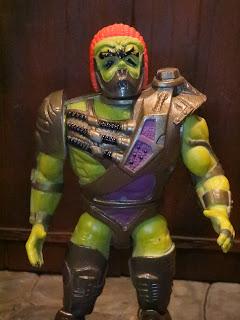 * There's nothing really wrong with Karatti's body design and there are definitely elements of the figure I really like. He has some cool armor with lots of details like hoses, an air tank of some sort on the back, and an electronics panel on the front. He also has a raised device of sorts on his left shoulder which for some reason makes me think of the Predator. The armor, the shoulder device, the dreadlocks, the face mask; I gotta wonder if the Predator was an inspiration for this guy?

* Karatti is able to do some martial arts moves when you spin his waist. When you swivel his torso to the right his right arm raises up. Let go and he spins and delivers a devastating karate chop. A Karatti karate chop. You can also just the right arm and let it go to deliver the karate chop as well. The right arm is designed to have the ax-like weapon attached, so he can also chop with the ax. 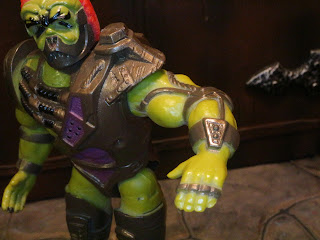 * When you spin his waist to the left Karatti's left arm moves backwards a bit and, when released, it springs forward to deliver a devastating jab. Like with the right arm you can also just pull the left arm back a bit and release it for an attack as well.

* Karatti comes with two weapons, the first of which is called a space blade. It's a very simple scimitar like weapon that Karatti can't "hold" but the handle can slide over either of Karatti's hands. 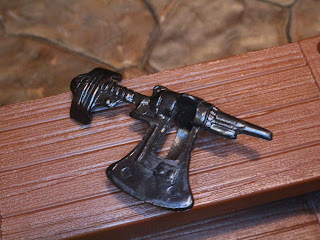 * The second weapon is the cooler of the two: It's called a solar axe and it features an axe blade that also seems to have a ranged weapon of sorts mounted to it. Nearly all of the Evil Mutant weapons feature a mixture of bladed weapons which I think is kind of a cool unifying design element. The handle of the axe actually plugs into a port on Karatti's forearm while his hand slips through a grip attached to the blade.

* I don't like Karatti's headsculpt. There are some cool details here such as either a metal jaw or a face mask and the dreadlocks but everything seems so squished together that it's really hard to make out what's going on here. 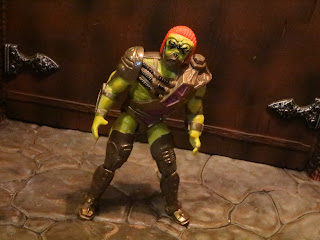 * While Karatti has his action features, which are pretty cool, overall his articulation is quite weak. There's just not really any posing you can do with him expect raise and lower his left arm or turn his head. heck, even his leg articulation doesn't really allow for much movement. 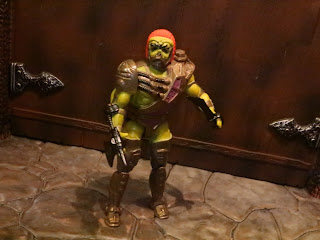 Karatti has some nice accessories and a cool concept overall, but I gotta admit that he's one of my least favorite of the He-Man/ New Adventures figures. He's definitely the dullest of the Space Mutants so far as I'm aware. Overall, I'm still giving him a Good rating, which is a perfectly average rating. There's some fun to be had here and I'm sure there is someone who loves Karatti dearly, but for me he's the weak link in the Evil Space Mutants legions.

Who do you think I'll be checking out next? Stay turned to find out!

If you're a fan of Karatti I've also reviewed the Masters of the Universe Classics Karatti.