Wrapping Up 2019: Sting from Masters of the WWE Universe by Mattel 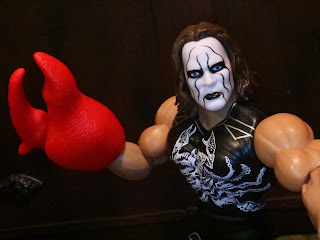 Today I'm checking out my second single carded figure from Mattel's new Masters of the WWE Universe line and this time it's the Mysterious Vigilante of Vengeance, Sting! While Finn Balor may be based on Beast Man, it's pretty clear that Sting is based on Clawful due to the presence of his giant scorpion claw. Yeah, it's a scorpion claw here, because Sting is all about Scorpions. Sting was a WCW guy for years but he finally made his way to the WWE at Survivor Series 2014, and while he didn't wrestle with WWE for long (he as injured in 2015 and retired shortly after) they've definitely been sure to merchandise the character. Sting has a great look and actually makes for a cool MOTU inspired warrior. Let's check out Sting after the break and see how he fares in the land of WWEternia... 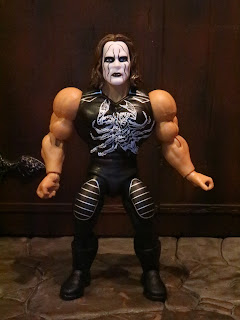 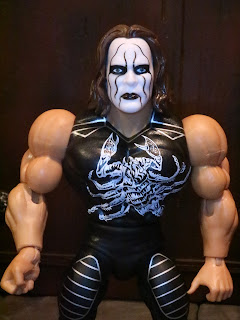 * In Masters of the WWE Universe, Sting is one of the heroes. A mysterious vigilante who is seeking to stop Triple H, Sting has the power to blend into the shadows and drop from any height into battle. As a figure, though, Sting looks like a fairly normal wrestling figure with the proportions of Mattel's Masters of the Universe Origins line. He's got his black sleeveless shirt with a cool scorpion on it and some black pads with thigh pads. Seriously, these guys could really be the modern versions of the 1990s Hasbro wrestling figures. Mattel did release quite a few of their own retro styled figures, but  perhaps they're hoping to capture both fans of that line and fans of MOTU with these? 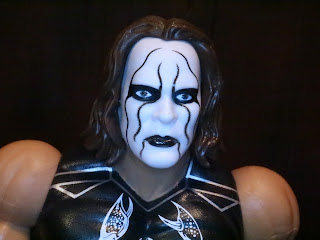 * This is a pretty solid Sting sculpt. He looks very classic with his black and white The Crow inspired face paint and his shoulder length hair, definitely appearing more like his WCW era self than from during his time with WWE. It's a solid headsculpt for a figure that is smaller than Mattel's standard wrestling figures. 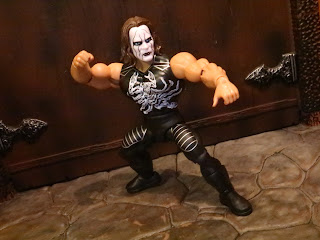 * These guys are built on the body Mattel is using for Masters of the Universe Origins, which works really well. Sting largely uses the same body as Triple H from the Grayskull Mania set (different boots, though), which means he has great articulation. These are very fun figures and each one gets me more and more excited for the release of the main MOTU line. 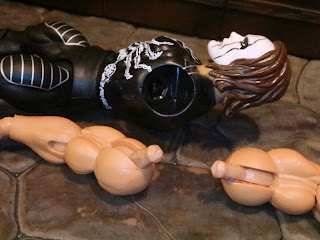 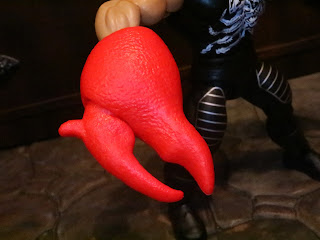 * In the story included with the minicomic Sting defeats one of Triple H's giant scorpions and takes a claw from it, which is dubbed his Scorpion Claw. It's a really cool piece that fits right over his hand and features a working hinge join so Sting can pick up his enemies and throw them around. Again, this looks just like Clawful's claw, so that's a huge plus. 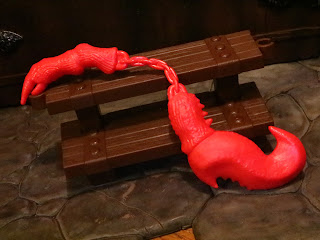 Sting's second weapon is a pure original: It's called his Stinger-Chucks and it's some random claws and stingers from the giant scorpion bound together by a chain. What? It's so awesomely, insanely cool and I love it. It seems very, very impractical, but who cares, right? 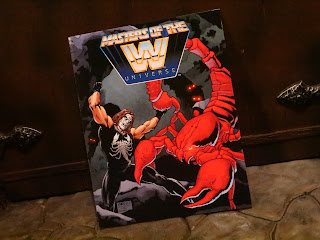 
* I applauded Sting above for looking like Sting but as a MOTU inspired figure he seems a bit too pedestrian. I know he has a giant claw you can attach to him, but giving him a harness or something really would have helped. I know these are WWE figures inspired by Masters of the Universe rather than Masters of the Universe figures inspired by wrestling, but Sting still seems a little too bland for WWEternia. 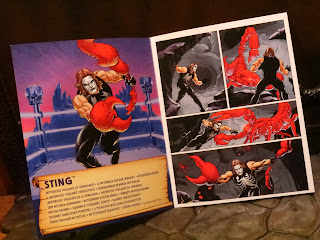 * So, I ordered the last three figures in this series through Walmart.com's Masters of the WWE Universe store and ended up getting multilingual cards. That's OK, except that the minicomic is the multilingual version, which means it has no word bubbles in the comic and no bio for Sting. Instead, his name is written in a bunch of languages. It's not the multilingual aspect that bothers me, but the fact that all of the fun details are gone. 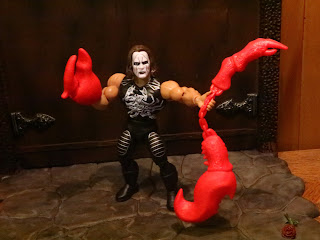 Sting is pretty cool. While he doesn't fit in with the Masters of the Universe aesthetic himself as much as some of the other figures in the line, he definitely has the coolest accessories in the line thus far. I'd give Sting a Good and a 1/2 rating. These figures haven't got the warmest reception from Masters of the Universe fans, but I definitely think MOTU fans should at last give them a shot. Wrestling fans, especially should check these out. They really do feel like modern versions of the vintage Hasbro wrestling figures.

If you're a fan of Sting, check out my review of the WWE Elite 39 Sting.

For more Masters of the WWE Universe figures, check out the following:
Finn Balor
Grayskull Mania
Posted by Barbecue17 at 1/04/2020