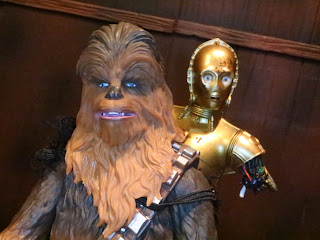 Well, unless I find the Mandalorian himself soon then this is the last Star Wars: The Black Series release I'll be reviewing from 2019. Released around early December, Chewbacca & C-3PO are an Amazon exclusive 2-pack featuring two of the Star Wars Galaxy's most recognizable heroes in a very scene specific look from the finale of The Empire Strikes Back. Chewbacca and Threepio are no strangers to the Black Series but this set definitely does something very different with them by allowing you to recreate Chewbacca toting C-3PO around Cloud City while escaping from the Empire's trap. And yes, I know that I positioned C-3PO incorrectly in my pictures, as he's supposed to be backwards. I finally got tired of him complaining that he couldn't see, OK? Let's check out this set after the break and see how it turned out... 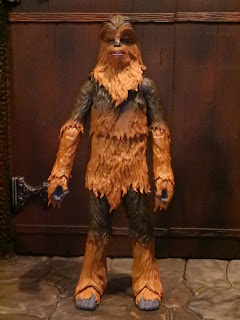 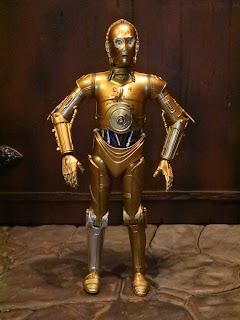 Non-Scalper Price: $50 for the set 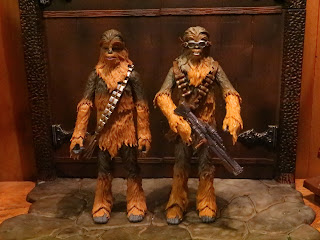 
* On the left is the Chewbacca from this set while on the right is the Target exclusive Chewbacca from Solo. While the paint,  accoutrements, and headsculpts are different, the base bodies are the same. 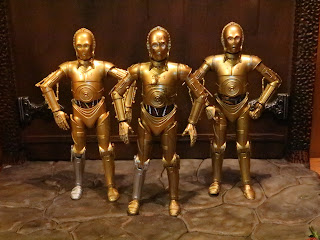 * This Empire Strikes back version of C-3PO (center) is a mixture of a few previous releases. There are definitely elements from the first Original Trilogy C-3PO (left) while the newer protocol droid elements from the Target exclusive C-3PO & Babu Frik (right) are included here, too. The joints are all very different, though, as this new C-3PO can be disassembled. (Ugnaughts sold separately!) 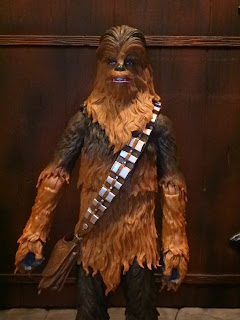 * Chewbacca uses the limbs from the original Black Series figure but he's got the newer torso from the Solo figure. He looks pretty good. I like the size and the new paint details. I really, really like the Solo Chewbacca, but this is probably my 2nd favorite Black Series Chewbacca release. 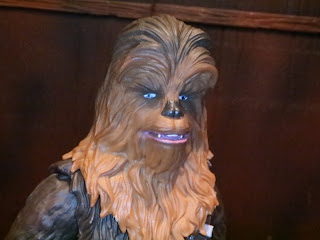 * The headsculpt is quite good and features the parted fur, which is a good luck. This is a fairly neutral looking Chewie, so he's useful for multiple scenes and not just scenes where he's using his Wookie rage. 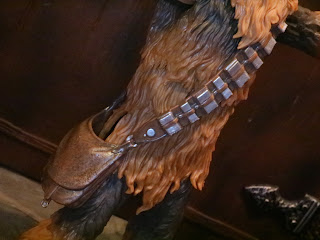 * This is a great looking bandolier. The colors are much, much nicer than on any of the previous releases, and the paint job is excellent with everything being very neat and clean. 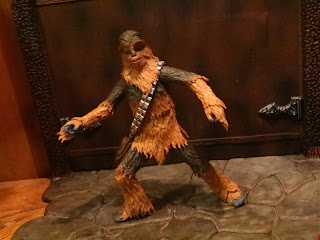 * This version of Chewie certainly isn't one of the most well articulated figures in the line, but I think he does everything you really need him to do. He's still fairly well articulated, but with the older limbs not every movement has the range of motion that newer figures have shown. 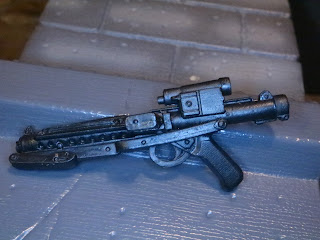 * Rather than his bowcaster, Chewie is carrying the E-11 he uses on Cloud City during the escape after Han is frozen in Carbonite. It's screen accurate and works for this version of the character. 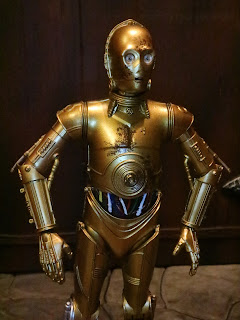 * This is a fantastic looking C-3PO that uses the new elbows with functioning pistons that first appeared with 4-LOM in 2018. Not only is this a great build but the colors look good and there's a nice amount of grime and such on C-3PO. Now if you're planning to use this as your default Threepio, well, you may not appreciate all of the wear and tear, but it is very fitting for his horrifying experiences on Cloud City and it helps him stand out from the other C-3PO figures released in the Black Series. 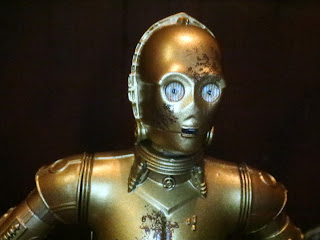 * I love the headsculpt here. Honestly, doesn't Threepio actually look alarmed? His eyes and mouth seriously make him look very concerned about his predicament, which is just so fitting for the character. 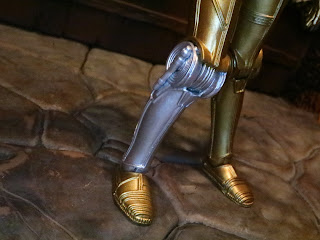 * When you Google "C-3PO's silver leg" you're absolutely going to find lots of articles and such claiming that C-3PO being all gold is an example of the Mandela Effect. That's true, although it changes a bit depending on which film you're watching. In TESB, C-3PO's lower leg is silver but his foot remains gold. I love that Hasbro nailed this detail here! It's always great to see the little stuff like this captured. 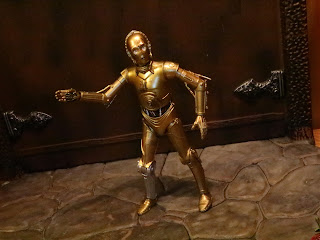 * While C-3PO isn't know for being the most mobile guy around, he still has a pretty great complement of articulation featuring every joint you'd expect from a Black Series figure. The joints are really well worked out to fit the droid's body, though, as the mid-torso joint is right above the mass of wires at his stomach and his hinged knees function in the way you'd expect due to the design of the costume. He's another quality, durable figure from Hasbro. 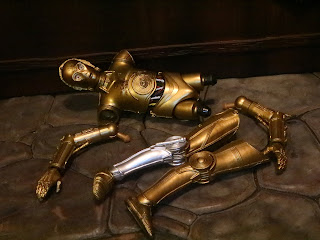 * He can also fall apart! I love it! Yes, Hasbro gives you the opportunity to live the Ugnaught lifestyle by making C-3PO able to be disassembled. The limbs and legs simply pull out. It's not too hard and it definitely allows for lots of crazy hijinks. 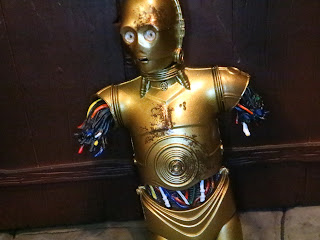 * To make C-3PO look even better when disassembled he has some extra pieces to give his sockets the look of having loose wires trailing out of them. These wired massed plug into his shoulders easily and really give the figure a nice "battle damaged" effect. 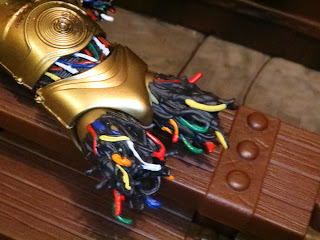 * For Threepio's legs you get too "cuffs" that fit over the hip hinges. There's a lot of color here and it also nicely gives the impression of C-3PO's limbs having been brutally removed by some barbarians! 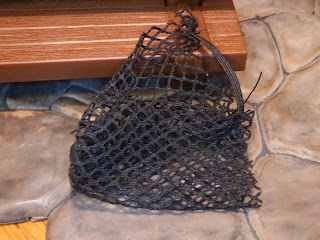 * To better tote C-3PO around the set comes with a net. This can go across Chewie's back so that he can carry the droid with him, just like in The Empire Strikes Back. 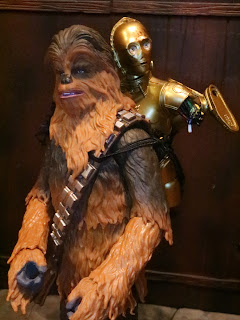 * Doesn't that look great? Seriously, this really turned out to be a nice set. Next up I'd love to see a new version of Luke and Darth Vader from their duel at Bespin. I just want more figures from The Empire Strikes Back, really. 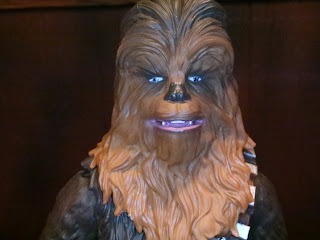 
* Chewie looks great from the side or at an angle but looking at him head on definitely shoes that his eyes aren't perfectly straight. 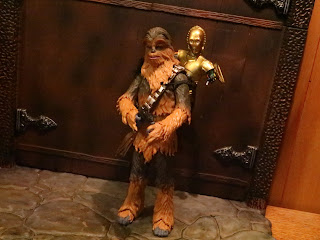 While it costs a bit more than a usual figure, this two-pack of Chewbacca & C-3PO is a pretty well thought out set from, arguably, the most popular of all of the Star Wars films. Chewbacca is a nice OT upgrade figure and C-3PO is an excellent, more scene specific version of the character. There's a lot going on here and the only thing that might make this set seem unexciting is the fact that we've received lots of Chewbaccas and C-3POs in the Black Series. Still, this is a Great and a 1/2 set with a lot of play value and versatility.


For more Star Wars: The Black Series figures check out the following: