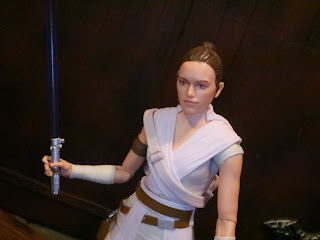 Hasbro really didn't release all that much new product for The Rise of Skywalker, which is a real shame. The movie had lots of characters that seemed very "toyetic" and far more interesting visually than in the previous Sequel Trilogy installments. Of course, Hasbro definitely delivered a new Rey figure and I'm glad to say that she turned out great. It's crazy to look back at Hasbro's initial Rey & BB-8 offering from 2015; The Black Series really has improved drastically over the past few years, hasn't it? Anyways, this version of Rey is based on her appearance in The Rise of Skywalker. Like with the original release from The Force Awakens, Rey also comes with a droid companion. This time it's D-O, the unique wheeled droid who once belonged to the Sith assassin Ochi. Let's check out this set and see what all Hasbro packed it with, as there are a few surprises. Join me after the break... 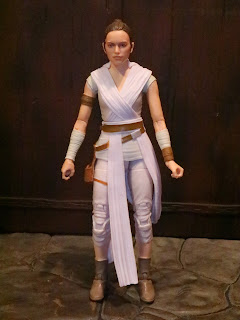 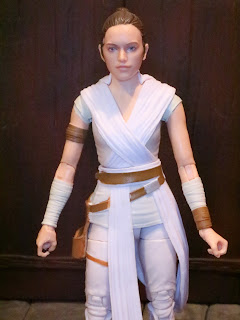 * One of the complaints levied against the Sequel Trilogy is that the costume designs don't change much between films and aren't particularly exciting. I agree with that to an extent, although I do like that Rey has a very "Star Wars" look that blends the feel of an OT costume with the Jedi sensibilities of the PT. Rey's costume is much lighter here than her The Last Jedi outfit and seems to be more evocative of her move towards being a trained Jedi Knight. The sculpt is good and the wraps across her chest are actually separate pieces attached to her torso. 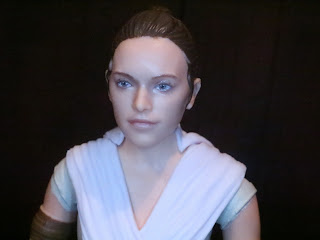 * The Daisy Ridley likeness is excellent here. Island Journey Rey was among the first figures to use the faceprinting technology and look how much better this one is than that figure from 2018. This is definitely the best Rey sculpt we've seen and even the more minor facial features look fairly accurate. The eyes are excellent, too. 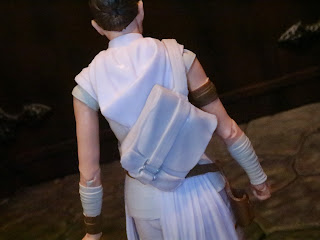 * Rey comes with a satchel that can fit around her torso quite easily. It's removable, so you don't always have to have her wearing it. You can also see the hood on Rey's outfit. It's molded on, but it's a nice touch. Honestly, I would have loved to have a removable hood that could be replaced with hood that fit over her head. It's a different look for the character, and very Jedi-like. * The articulation is excellent here, but that's been a given with most of the Black Series figures for some time now. The Black Series definitely has one of the best blends of plentiful articulation with solid sculpting available at mass retail. Rey can take some excellent poses and is just a delight to mess around with. She's sturdy, too, so no worries about breakage. 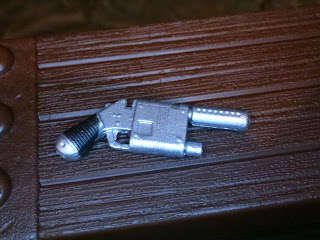 * Rey comes loaded with accessories. We've already seen the satchel, so her second accessory is the LPA NN-14 blaster pistol Han gave to Rey on Takodana in The Force Awakens. We've seen this accessory before but it's a great blaster design and something Rey always totes around, so I'm glad to see it again. 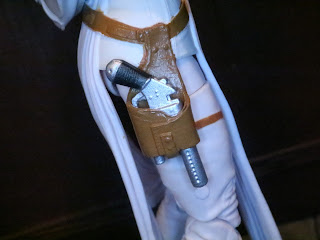 * The NN-14 easily slips into the functional holster on Rey's belt. That's where she keeps it most of the time, so it's a good thing it looks great there. 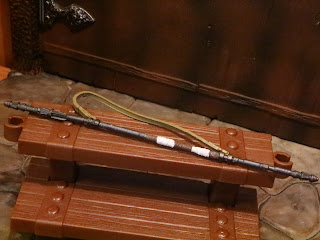 * Rey nearly always comes with her staff, though this time it's a new sculpt. It's also much more detailed with more paint applications. 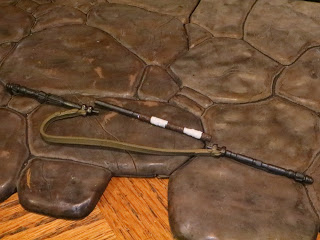 * Oddly enough, this version of the staff separates at the ends. The middle section of the shaft is removable. I assume this is to help make it easier to place on Rey's shoulder so she can tote it around easier? 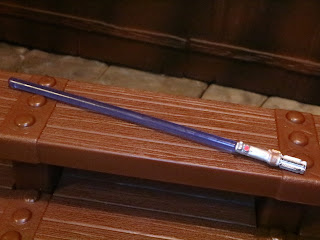 * Rey comes with the repaired Skywalker lightsaber. It's actually a different sculpt than the previous release (you can see the leather strap that is used to cover up the spot where repairs were made). It's nicely painted and features the same removable blade most other lightsabers in the Black Series have had. 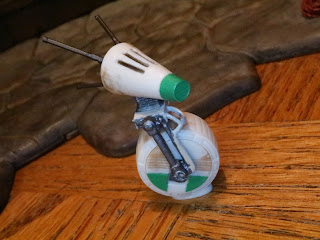 * One of the coolest extras in this set is D-O (who is voiced by J. J. Abrams), the droid who is brought back online after years of being inactive on Ochi's ship. The sculpt is excellent. D-O is small (only an inch and a half tall) but he;s loaded with detail. I love his doglike head (he reminds me a little of K-9 from Doctor Who). He's quite adorable! 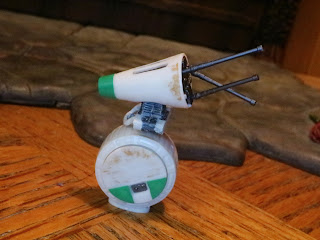 * D-O is also very well articulated. He's got a rolling disc, a swiveling arm that connects to the disc, a balljointed "head," and three balljointed antennae. This little guy seriously has more articulation than most of the 1/18th scale Star Wars figures Hasbro has released outside of The Vintage Collection over the past 4 or 5 years. 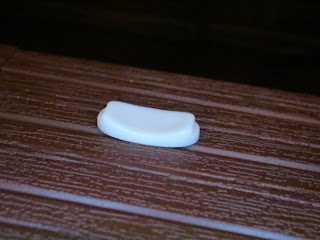 * Ready for the teeny, tiny accessory you're likely to lose? It's this little piece. It's a small stand for D-O that allows him to stand upright without rolling away. Seriously, don't lose this piece! I've seen a lot of other reviews of the figure not even mention the stand, so be careful! 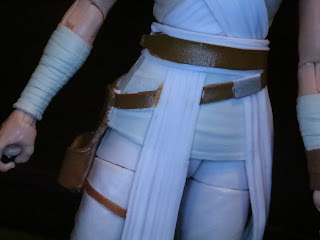 * The paintwork on Rey's belts is a little uneven, as you'll see lots of white on the edges where the paint didn't fully cover the sculpt. 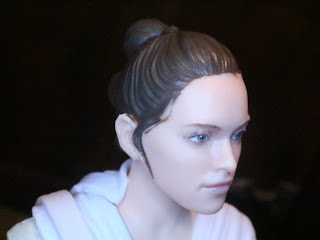 * My Rey has a slight flaw where the paint on her hair isn't fully covered. It's a shame, as otherwise her portrait is flawless. 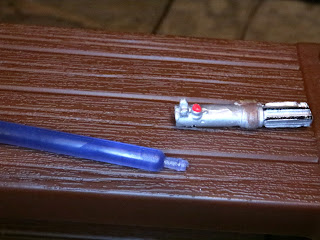 * I still don't like the flimsy plugs on these lightsaber blades. Please, Hasbro! Just give us a hilt and a regular lit lightsaber. It'd be so much better! 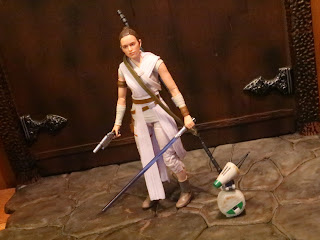 Maybe this version of Rey doesn't look as radically different from previous versions of Rey, but she's still the best Rey figure Hasbro has released. On her own she's be a very solid figure but partner her with D-O and you've got an Epic release. Seriously, D-O is such a fun little droid figure that you'll be hard pressed to find a cooler miniature droid toy. I do kind of want two more Rey figures from Hasbro in the Black Series, though: Dark Side Rey (who looks awesome even though she's just a vision) and a "finale" Rey with Luke's, Leia's, and her own yellow bladed lightsaber. C'mon Hasbro! Just a few more!


Where's Rey? Here she is! I've reviewed a bunch of Rey figures including Hasbro's Black Series Rey (Jakku) & BB-8, the K-Mart exclusive Rey (Starkiller Base), Rey with her Speeder, Rey (Jedi Training), Rey (Island Journey), the Toys R Us exclusive Rey (Jedi Training) on Crait, and the Vintage Collection Rey (Jakku). I've also checked out the Micro Machines Speeder Chase set that includes a micro Rey on her Speeder and the Micro Force Rey from the Advent Calendar.

For more figures from The Black Series Phase III, check out the following: