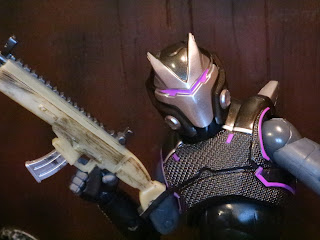 Happy New Year! 2019 was actually a pretty solid year for action figures and one of my favorite new lines of 2019 was Jazwares' Fortnite: Legendary Series. These are some of the best 6 inch scaled action figures on the market with great character design and I'm going to be covering most of series 3 over the next few weeks as I'm wrapping up 2019 release in time for my annual best of the year awards. While the rest of the Fortnite: Legendary Series retails for around $20 dollars, Jazwares did release two deluxe versions of the Omega: Max Level figure. The Omega suit is an upgradeable suit from Fortnite's fourth season, and thus the Omega: Max Level figure features multiple pieces of armor. 24 pieces of armor, to be exact. Yeah, this guy comes with a bunch of armored pieces to put on. Remember Ronin Warriors and Power Force? For some reason he reminds me of those lines, although he's got even more armor. He's built the same as the rest of the Fortnite: Legendary Series figures, but his body is designed with lots of holes that allow the armored piece to plug onto the figure. I actually held off on buying this guy for a few months but I finally found him on sale and decided to pick him up. Let's check out the purple version of Omega: Max Level after the break... 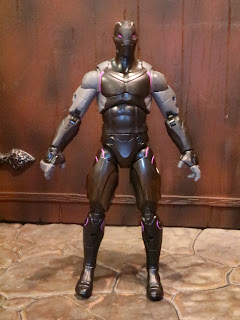 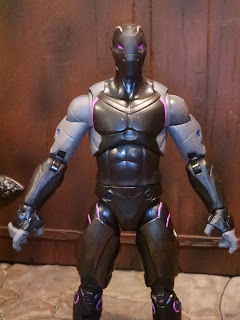 * Underneath his armor, Omega starts off looking very basic. Not plain, just basic. He's definitely got some underarmor of sorts. This guy usually has so much armor, though, that I forgot to remove all of it for the shot as Omega is still wearing his thigh armor in the picture to the right. 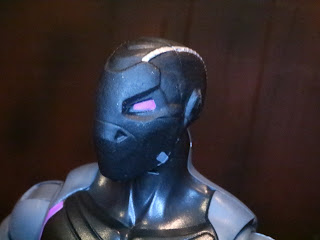 * Omega's helmet is interesting. It's quite small and look more like a mask that sits tightly over his face. The nose holes on the mask are very large and kind of snake-like, sort of like Voldemort's nostrils. 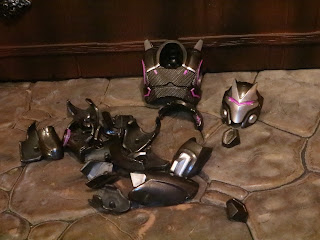 * Here is a shot of the pile of 24 pieces of armor that Omega comes with. Apparently in the game this outfit actually levels up, allowing you to gain the various armored bits. The pieces are overall quite nice feel fairly solid and durable. 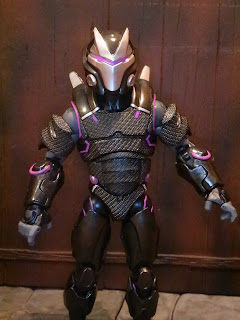 * Omega looks much better with his armor on. He's quite cool. The armor is definitely labor intensive to put on (this is quite a bit more involved than the old Kenner "quick change" Batman figures) but it has a great design with some really cool textures and purple highlights. 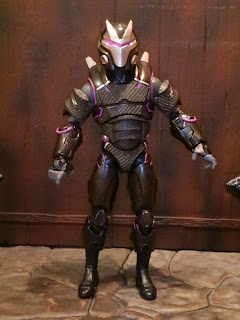 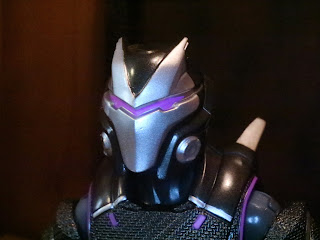 * The helmet looks cool and definitely matches the loom of the in-game armor. Again, he totally makes me thing of something like Power Force or VR Troopers or some Super Sentai styled show. 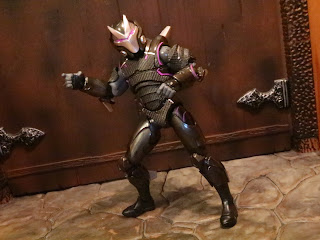 * Despite all of his armor, the only point of articulation that is impeded is Omega's mid-torso. Otherwise, he can wear all of this stuff and still move freely, just like any other Fortnite: Legendary Series figure. 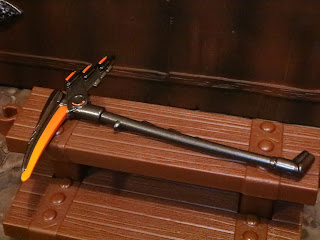 * The Onslaught harvesting tool is tied to the in-game achievements related to the Omega suit, so it only makes sense that Omega comes with it. It's a cool, pickax like weapon with orange highlights. There are actually two differently colored versions of Omega, but the weapons are the same with both of them. 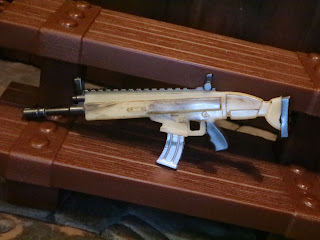 * Like The Visitor, Omega also comes with the Siegebreaker, a Legendary version of the Automatic Rifle. It's a really cool looking rifle with some decent sculpting and a lot of weathering. Seriously, Jazwares does a pretty job of painting and weathering their accessories. I wish some of the other companies putting out collector focused lines at retail would take notice, too. 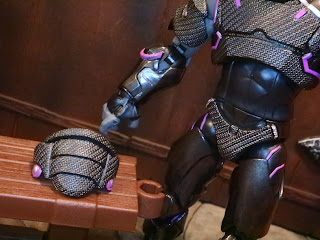 * When it comes to getting the armor to stay on, the only piece I really had serious trouble with is the abdomen piece. It tends to pop off on it's own and, since it's only held with friction, it tends to launch off with some force. 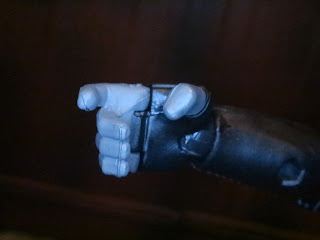 * My ongoing complaint with this line is that Jazwares went with hinged fingers. The fingers move with one hinge and while they're not as problematic as the fingers on older Marvel Legends figures, I still don't like them that well. They have a fairly tight grip, but sometimes they're still tough to us, especially for accessories like the melee weapon or a gun grip. Articulated fingers rarely work and here they seem like a fairly useless feature. If they dropped the articulated fingers I'd be thrilled. 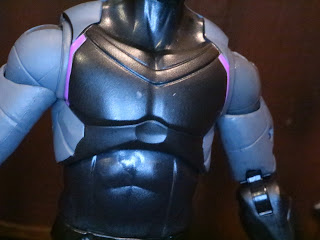 * Omega has some scuffs on his torso that were present before I even touched the figure. Just a bit of QC oversight, really.

* There is a lot of armor to put on this guy and, frankly, I find it a bit tedious. I love the idea of removable armor, but I would have been A-OK with just the helmet, torso armor, and maybe the pads or something. This is definitely a personal choice, as I'm sure some of y'all will love this, but for me this guy's a but too much work. 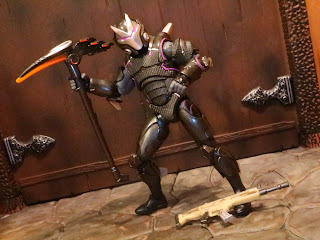 Omega: Max Level isn't a bad figure, although he is definitely the weakest figure in the Fortnite: Legendary Series in my eyes. Fewer actual accessories (though a ton of armor), no back bling, a $30 dollar price tag instead of the standard $20, and the fragility that comes with having so much armor on the figure definitely makes me a but less enthusiastic. Some of y'all will probably go nuts for this guy but I find it harder to get enthused about him. He's still a Good and a 1/2 figure but, given what we've got from this line so far, that's kind of weak, especially for a deluxe release.