Wrapping Up 2019: Anti-Eternia He-Man (Clear Smoke) from Masters of the Universe: ReAction by Super7 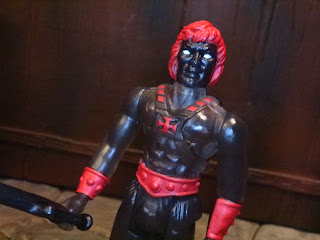 Well, it's official folks: Super7 is currently finished releasing new Masters of the Universe product. Yeah, they'll still be completing the preorders for the William Stout based movie figures (which should begin shipping tomorrow), Club Grayskull series 4, and Snake Mountain, but nothing new is coming out after this for the near future. Mattel seems to want to hold the MOTU license fairly close to their chests at the moment and they're apparently being very selective about the licensees they're allowing to keep making stuff (apparently Mondo gets a pass as their items are definitely much higher end than anything Mattel plans to make). Prior to Christmas Super7 released a few new items in the ReAction series: A new series of five translucent variants (Mer-Man, Orko, Skeletor, Scare Glow, and Anti-Eternia He-Man) and then the 2-packs of Battle Cat and Panthor with He-Man and Skeletor, respectively. I'll be reviewing the cat packs shortly but I only picked up two of the translucent figures for the time being. One of those is Anti-Eternia He-Man, the evil He-Man of Anti-Eternia. Based on a character appearing in a 1985 German audio-play, Mattel released Anti-Eternia He-Man in the MOTUC line in 2016 as an online chase variant and in 2018 Super7 released a ReAction Anti-Eternia He-Man. Anti-Eternia He-Man is currently the prime antagonist in DC's current He-Man and the Masters of the Multiverse comic series, so Super7 is definitely striking while the iron is hot with this one. Let's check out this "Clear Smoke" variant of the evil black and red He-Man after the break... 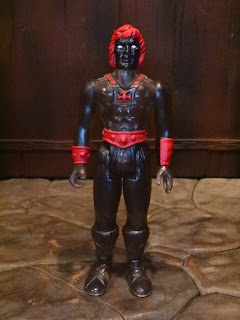 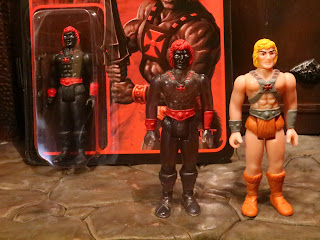 *On the left is my PowerCon 2018 Anti-Eternia He-Man (still in the package) while the new Clear Smoke Anti-Eternia He-Man is in the middle and the standard series 1 He-Man is on the right. This guy is largely the same as most every other ReAction He-Man figure released, so this one's going to be a bit shorter than some reviews. 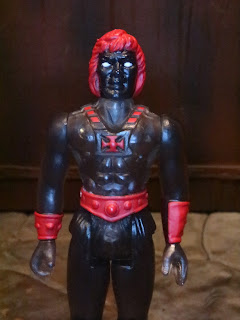 
* If you don't already have an Anti-Eternia He-Man, you'll definitely be struck by how cool the red and black looks. It definitely makes him look very menacing and fearsome. The figure is molded in a smoky, translucent plastic that gives him an even more unworldly look. Hold him up to a bright light and he looks even more ethereal.


* Of course, he has the same articulation as any other figure in this series, thus he really feels like a high quality vintage Kenner figure. 5POA, baby! 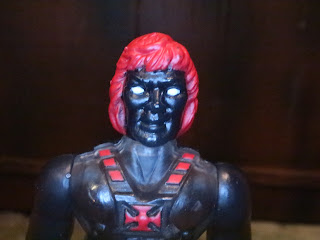 * The head sculpt is the same as the standard figure (just like everything else is) but solid white eyes definitely makes him seem more soulless and evil. 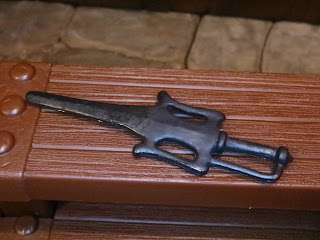 * Anti-Eternia He-Man comes with the standard Power Sword, except this time it is molded in black. I like it, though it really makes me wish Super7 had released Wun-Dar/ Savage He-Man in the Re-Action series. 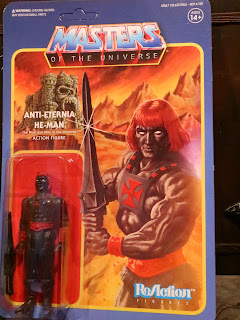 *  The card art on most ReAction figures released by Super7 is beautiful and their Masters of the Universe line is no exception. While this version of Anti-Eternia He-Man doesn't have the elaborate red and black color scheme of the previous releases, the art still looks good.  To preserve the card I actually made a slit in the top of the blister so I can slide the figure in and out. It work great and allows the figure to be displayed inside and outside of the card. I've got mine hanging on a metal pegboard similar to what you'd see in a retail store! 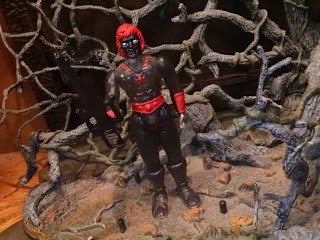 I really like this Anti-Eternia He-Man. If you never got a chance to grab the previous releases, this gives you a chance to have on on your shelf. Heck, even though I own one of the previous releases, Anti-Eternia He-Man is such an offbeat character that I don't mind having a variant of him. Unfortunately, the last series is full of variants we didn't really need (Mer-Man, Skeletor, and Orko) and which would have been better served with easy repaints or new characters (Wun-Dar, Moss Man come to mind). Clear Smoke Anti-Eternia He-Man is a Great figure, though, and definitely worth tracking down for fans of the line.