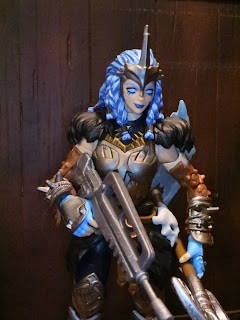 I'm down to only two reviews left until I've finished up reviewing the 2019 Fortnite:Legendary Series releases so let's knock one of them out today with a look at Valkyrie. Valkyrie is not only one of the coolest figures in Jazwares' Fortnite: Legendary Series but she also stands as the first female released in the line. Originally slated for series 2 in early Fall, Valkyrie ended up shipping out with series 3 in December. Valkyrie is a Legendary outfit in Fortnite and is loaded down with amazing details. She was another figure I received for Christmas and I've been really excited to review her. Ready to check out Valkyrie? Then join me after the break... 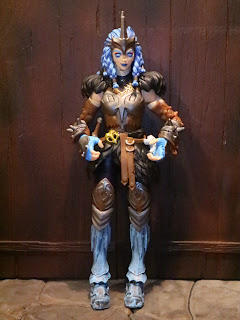 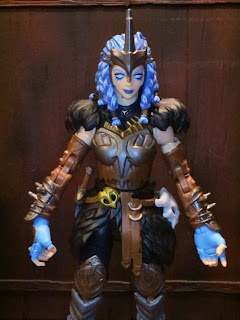 
* Valkyrie has an incredibly cool appearance that seems to bring together viking and Norse influences with some barbarian/ fantasy designs. She looks like she'd be at home in Skyrim, Asgard, or palling around with Conan and Red Sonja. Valkyrie has a completely unique sculpt and is covered with really cool armor. The paintwork is excellent, too, and all of the minor details on the figure are given paint hits to bring them to life. 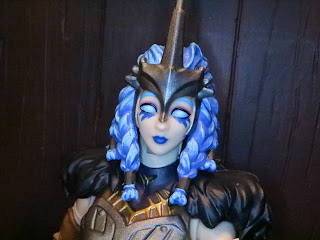 * Valkyrie has an excellent headsculpt. Her blue hair is gorgeous and intricately styled. She's wearing a armored crown of sorts and, of course, she has interchangeable face plates like most other figures in the line. The first face is kind of neutral, and maybe even a bit "sweet-natured." I really like her elaborate eye makeup and the blue lipstick, too. 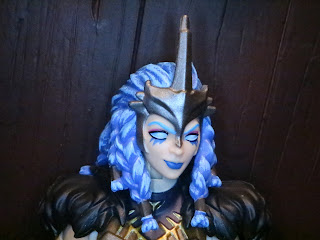 * Valkyrie's second face plate seems more fitting for a warrior of her caliber, though: She looks like she's reveling in battle with a smirk on her face. This is probably my favorite of the three face plates. 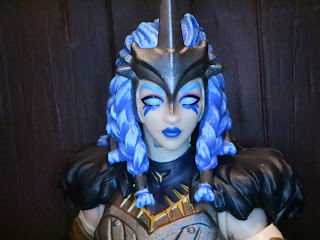 * Last up is a very serious looking face plate. It actually be the most neutral of the three. 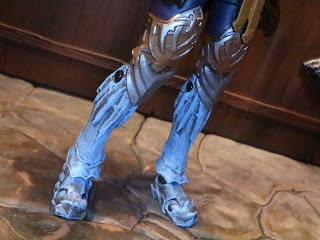 * These boots are incredible. Not only are they impressively sculpted but they also like like they're covered in ice. Maybe Valkyrie's been walking through the cold or maybe she brings the cold with her wherever she goes. 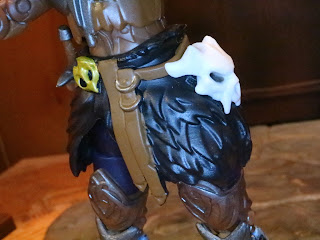 * Valkyrie's wearing a furry waist-covering and toting around a small skull of sorts. Why? Why not? Seriously, would you question her fashion choices to her face? 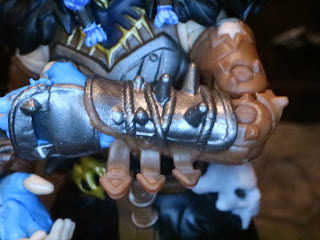 * Valkyrie has some seriously nasty gantlets. Check out the spikes on these! Imagine getting backhanded in the face with these? Sheesh! 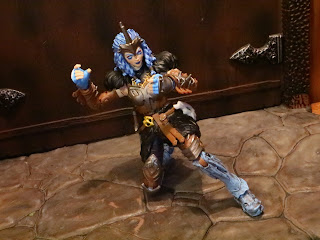 * Just like every other figure in the line, the articulation is incredible. Valkyrie's articulation is as strong as any of the male figures and still features the inclusion of things like toe joints, lots of swivel hinges, double hinged elbows and knees, and butterfly pecs which allow her to take some crazy poses and use two-handed weapons with ease. 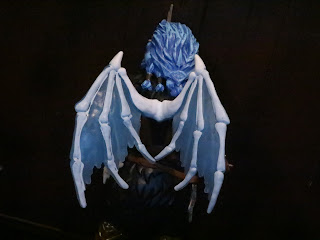 * Valkyrie's "back bling" is actually a set of icy skeletal wings. These look really cool and definitely make her an even more visually interesting figure. 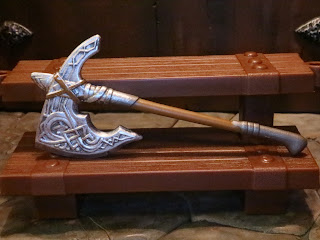 * The Forebearer is a really cool Norse styled ax that serves as Valkyrie's harvesting tool. This thing is amazing! Seriously, look at the detail on this. I love it and Valkyrie looks incredible wielding it. 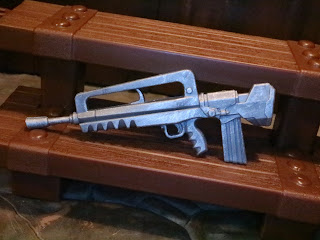 * Valkyrie is loaded down with the very cool Burst Assault Rifle which totally looks like a FAMAS. Whenever I see the FAMAS I immediately think of Metal Gear Solid, since that's the first place I ever encountered the weapon. Anyways, connecting something back to Metal Gear Solid always gets points from me, plus this is a really nicely sculpted accessory. The gunmetal effect of the paint is quite nice, too. 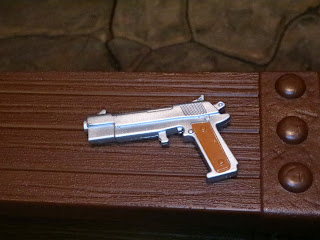 * Valkyrie is also toting around a pistol. In the game this is the generic starting pistol (from what I can find on the Fortnite Wiki; I've played the game about three times and that was over a year or so ago). It kind of looks like a few different pistol types, so perhaps it is intended to be an amalgam of some of the most popular pistols out there. 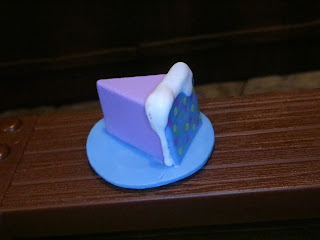 * To celebrate being the first female figure in the line Valkyrie comes with a piece of cake! OK, that's not entirely true. The cake is apparently a consumable item in the game that shows up from time to time and restores some health and some shields. It's a simple slice of cake with sprinkles painted on the edges. Dang, now I'm really getting hungry for a big piece of cake. 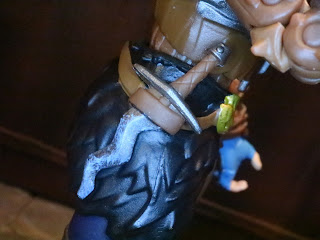 * Oh no! Valkyrie has one of my biggest action figure pet peeves: A knife that's "molded" on rather than being usable! Valkyrie has this cool twisty dagger in a loop on her belt, but you can't remove it. How lame! Seriously, how cool would it have been for her to tote around this little dagger she could pull out and fight with? 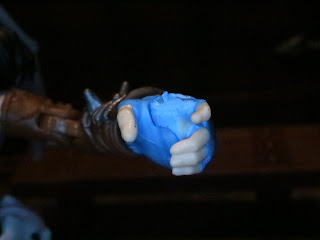 The fingers move with one hinge and while they're not as problematic as the fingers on older Marvel Legends figures, I still don't like them as well as the use of alternate hands. They have a fairly tight grip, but sometimes they're still tough to use. 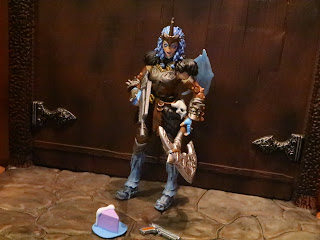 Valkyrie is another winner in this line. In fact, she just might be one of my favorite 2019 Fortnite: Legendary Series releases. She's easily one of the coolest and most intricate figures in the line, and her complement of accessories is very nice indeed. She's another Epic figure in what has turned out to be one of my favorite lines of 2019. Interestingly, her counterpart, Ragnarok, just randomly showed up for sale on Amazon last week. He's one of the deluxe figures, like Omega: Max Level, so he's loaded with goodies as well. I really hope some more of the duos get produced, along with more women.


This is the first figure of Valkyrie I've reviewed. For more Fortnite: Legendary Series reviews, check out the following: