Wrapping Up 2019: Michael Myers from Toony Terrors by NECA 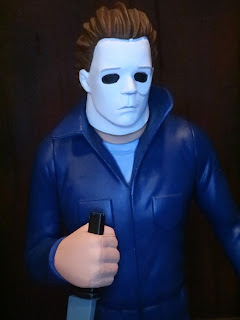 2019 was a year where a lot of different toylines popped up and surprised me, and one of those pleasant surprises was NECA's Toony Terrors. Imagine if classic cinematic slashers like Freddy Krueger and Jason Voorhees had appeared in a 1980s Saturday morning cartoon! That's Toony Terrors! NECA has done a great job with the design and distribution of this line, and they've managed to keep the price very reasonable too. You can actually find these fellows at both Target and Walmart, which has gotta really help NECA to keep a line like this going. They seem to be a hit as series 2 showed up a month or so ago and NECA has more planned for series 3 (featuring Nosferatu, Ash from Army of Darkness, and the Nun from the Conjuring series). My most anticipated figure in this series was always Michael Myers and while I was really hoping he'd make it out in time for Halloween, he ended up showing up around Thanksgiving instead. Interestingly, the packaging denotes this as being Michael Myers from Halloween II, which is one of the three Halloween films NECA has based product off of in the last year or so (the others being Halloween III: Season of the Witch and Halloween 2018). I'm guessing NECA currently only has the rights to those films, for some reason. Mezco has released product based on the original film while Funko's have been based on Halloween: Ressurrection and Halloween: The Curse of Michael Myers. Interesting, huh? Anyways, I'm sure you're far more interested in hearing me talk about this figure rather than about the weird licensing issues with the Halloween films. Let's check out the Toony Terrors Michael Myers after the break... 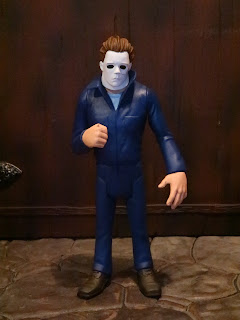 Accessories: knife and cut out backdrop 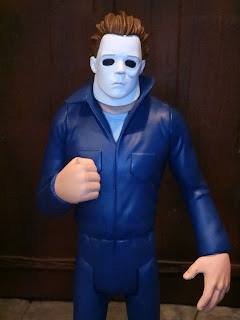 * To be honest, there really isn't a lot of difference between Michael Myers' costume in Halloween and Halloween 2. Do you want to pretend this is a Halloween Michael Myers? Knock yourself out! This guy looks fantastic and is clearly recognizable as Michael Myers. The animated appearance here is fantastic. Seriously, just looking at these figures really starts to get you wondering what a 1980s cartoon with these guys would have been like. I still think they could have teamed up to solve mysteries, never even acknowledging that these guys are actually serial killers. Freddy's the wisecracking leader, Michael's the always cool, yet silent, problem solver, Jason is menacing, angry, and strong, and Leatherface is a party dude. 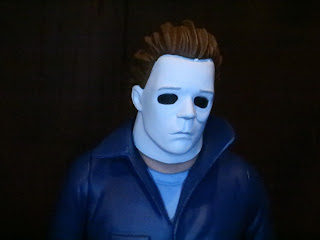 * I love the head sculpt here. It very clearly captures the look of Michael Myers' mask while also seeming a bit more expressive than usual. C'mon, you know that if he'd have been animated his mask clearly would have been given facial expressions. The hair looks excellent here, too. 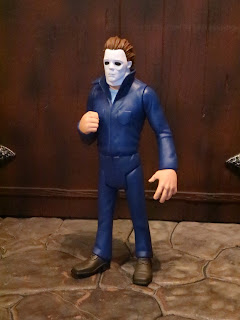 * NECA did a good job of making the figures from the first two series look pretty good together with differing body types. While Leatherface is massive and wide and Jason is hulking and but maybe just a bit gangling, Michael looks kind of sleek and built here. His outfit is a very vivid blue that seems like it would stand out quite well in an animation cel. 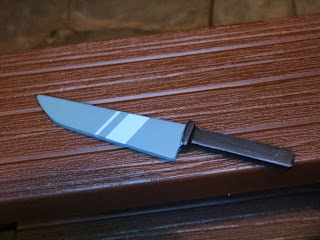 * Michael comes with his signature knife and, like Freddy Krueger and Jason, the blade of his weapon is designed to have the look metal is often given in animation. The "reflective streaks" down the middle are just part of the paint applications, but they look fantastic. 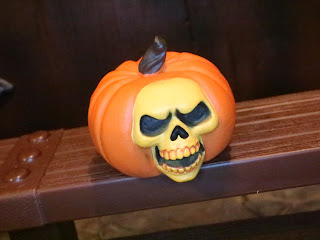 * Want to know what definitely designates this as a Halloween 2 Michael Myers? This pumpkin! The skull faced pumpkin is unique to Halloween II and it looks fantastic here. The face looks quite a bit like Skeletor, doesn't it? Seriously though, maybe this guy is intended to be a talking sidekick character who gives the group their missions. Can't you see a wisecracking skull pumpkin giving Freddy, Jason, Michael, and Leatherface their latest assignment? 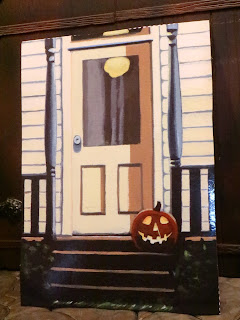 *  One of the features of this series is that each character comes with a cardboard backdrop that is actually the back of the package. Michael's shows off a suburban porch with a jack o' lantern on the step, a key locale for Michael and one that definitely looks like it could be from a cartoon. It's kind of a fun touch that reminds me of the cardboard backdrops that came with various toylines of the late 80s and early 90s, such as Monster Force. 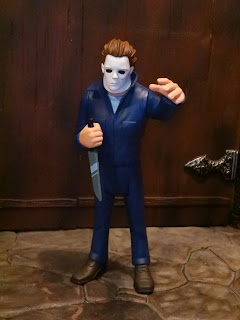 * These guys aren't super articulated by an stretch of the imagination but Michael Myers has some problems with the a couple of the joints he does have. His left hand doesn't want to turn well, as it seems like it is sticking in the socket. Might need some work. Also, his hip joints are so tight that moving them feels awkward. I wouldn't recommend it. 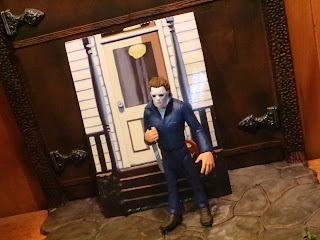 * The cardboard backdrop is just a cardboard backdrop and it ends up looking kind of weird just sitting behind the figure. I wish these figures had a base this could clip onto, or perhaps if it were a separate piece in the package that folded down and made a diorama like base with a small floor section.There's gotta be a way to improve this idea and make it really seem like a worthwhile thing. 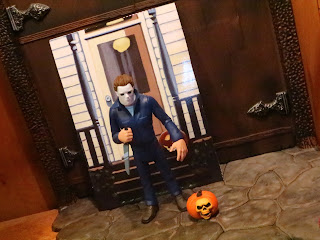 Michael Myers might have a few issues but I have to say that this guy is definitely a favorite for me this year He's a Good and a 1/2 figure that really, really will stand out on your shelf. Get all of these guys together and you'll end up with one of the coolest groups of toys you could imagine. Put them out and try to convince your less pop culture savvy friends that these guys are based on a 1980s kids cartoon. I'd love to see NECA continue this line and it really feels very inspired and fun. I'll be checking out Leatherface soon, so be ready for that!