Wrapping Up 2019: Ultimate Warrior from Masters of the WWE Universe by Mattel 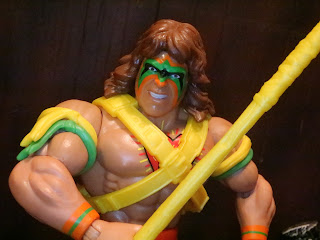 Today I'm wrapping up the 2019 Masters of the WWE Universe releases with a look at Ultimate Warrior, the Heroic Champion of WWEternia. I like the fact that Mattel really mixed up the wrestlers appearing in the first series of figures as we got a classic guy (Ultimate Warrior), a 90's Attitude Era/ Monday Night Wars guy (Sting), some Ruthless Aggression era guys (Cena and Triple H), and a modern Superstar (Finn Balor). It's a good mix that works well with the craziness of Masters of the WWE Universe. Looking at the minicomic and the cardback, I really get the impression that Ultimate Warrior is the main hero of WWEternia. He definitely seems to be a hero very much in the vein of He-Man in the original "He-Man and the Power Sword" minicomic. Heck, he carries the same spear as Oo-Lar, so the connection seems crystal clear, actually. Let's take a look at the Ultimate Warrior after the break... 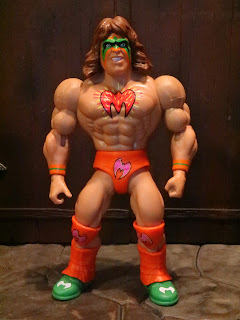 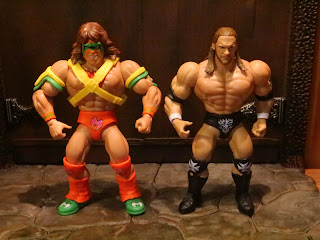 * On the left is the Ultimate Warrior while the Grayskull Mania Triple H is on the right. Other than the armor and armbands and the boots, these two guys use exactly the same base body, which seems to be a key part of what Mattel is doing with this line and Masters of the Universe Origins. It'll be interesting to see how long it takes before MOTUO and MOTWWEU add new body types into the lines. 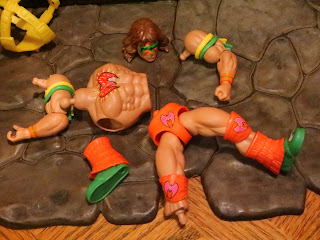 * It seems that this line and Masters of the Universe Origins are going to be very modular. Here's a shot of Ultimate Warrior disassembled. This should definitely make for some very easy customizing options for collectors to mess around with these and make their own warriors. 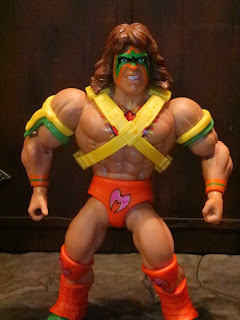 * The Ultimate Warrior really does a good job of feeling like a wrestling figure true to the iconic character while also feeling like he could be a legitimate MOTU characters. Seriously, doesn't he feel like a character that could have been released in the vintage MOTU line? A barbaric, tribal-like warrior with a painted face? His harness actually seems like it is imbued with technology, just like He-Man's Techno Vest in the earliest minicomics. I love the bright colors, the removable arm tassels, and the primitive feel of Ultimate Warrior. He's fantastic! 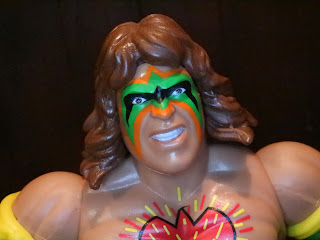 * The headsculpt is fantastic. It's clearly the Ultimate Warrior but it also has a bit more of a caricatured look to it which I think works better in this line and for blending him with other MOTUO figures. The face paint is excellent, as is the expression. This guys looks very intense and ready for battle. 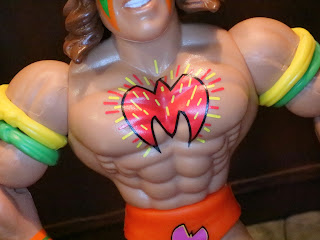 * I really like Warrior's tattoo on his chest. It looks like his mask inspired symbol, but even more wild. Seriously, while He-Man never had a tattoo it definitely makes me think back to the primitive He-Man/ Oo-Lar who wanders out of the jungle. Except that the Ultimate Warrior clearly is from Parts Unknown! 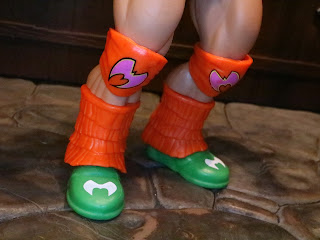 * The boots and knee pads are pretty cool, too. They're colorful and oh so funky. 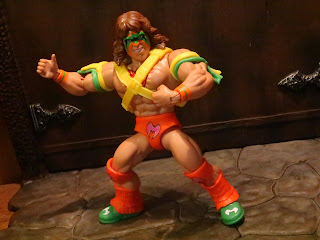 *  These guys are built on the body Mattel is using for Masters of the Universe Origins, which works really well. These are very fun figures and each one gets me more and more excited for the release of the main MOTU line. Mattel just showed off Scare Glow today, so I have high hopes for the line! 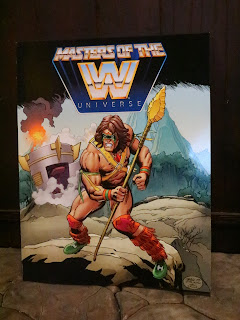 *  Packed in with each standard MOTWWEU release is a minicomic of sorts. It's only 4 pages (cover, bio, comic, and back page with cross sell art) but it looks cool and does offer some cool information on the role of the characters in WWEternia. 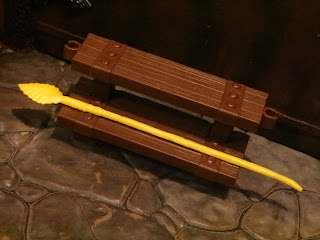 * The Ultimate Warrior comes with a spear and it really is the spear from the Masters of the Universe Classics Oo-Lar figure. It's molded in yellow here, which fits Warrior's color scheme a bit better. It's a cool accessory and I believe it's also the second straight-up reuse of a MOTUC accessory in this line (Grayskull Mania Triple H had Skeletor's Terror Claws). 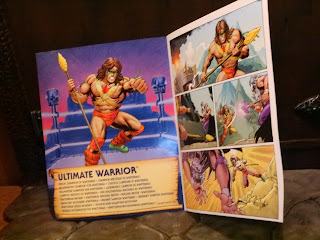 
*  Like with Sting and Triple H, I ordered this figure through Walmart.com's Masters of the WWE Universe store and ended up getting multilingual cards. That's OK, except that the minicomic is the multilingual version, which means it has no word bubbles in the comic and no bio for the Ultimate Warrior. Instead, his name is written in a bunch of languages. It's not the multilingual aspect that bothers me, but the fact that all of the fun details are gone. 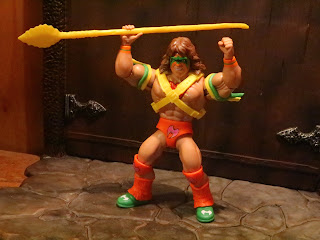