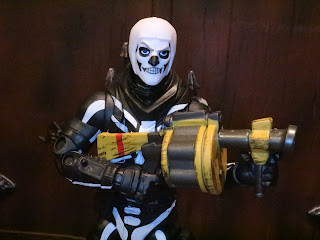 I'm back with yet another item I received for Christmas! I ended up with most of the latest series of Fortnite: Legendary Series figures under the Christmas tree for me, including this very cool Skull Trooper. The Purple Glow Skull Trooper was released in the first series of figures last summer and was actually the first of the Fortnite: Legendary Series figures I reviewed. The Skull Trooper is definitely one of the most recognizable characters from Fortnite and I've always found it interesting that Jazwares led off with the purple variant. This guy is really cool, though, and while he's a repaint he looks awesome, makes for a nice troop builder styled figure, and comes with a slightly different arsenal than the first release. Let's check out this wicked cool Series 3 Skull Trooper after the break... 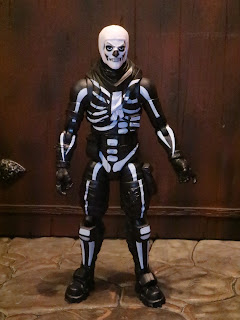 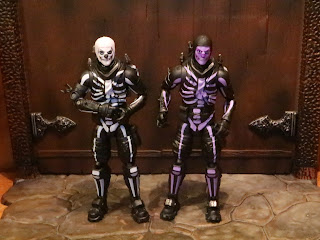 *On the left is the new standard Skull Trooper while the Skull Trooper (Purple Glow) variant is on the right. Again, this black and white Skull Trooper is just a repaint of the original figure, though that is accurate to the original. The articulation is exactly the same, of course, though the finger hinges are a little tighter here, which is really nice. 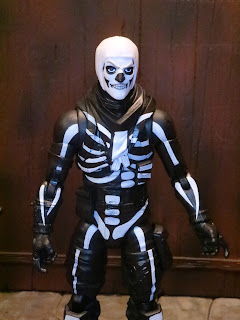 * Like Scareglow, the Skull Trooper doesn't have any sculpted bones: He's simply a guy in a black tactical jumpsuit with purple bones painted on the outfit. Unlike Scareglow, Skull Trooper isn't supposed to be an actual skeleton. He took the tactical look of Simon "Ghost" Riley from Call of Duty and then went to the extreme. The outfit looks quite cool and has a nice complement of tactical pouches, pockets, and straps. The paintwork on the "bones" is really nice. He doesn't actually glow but he's still a pretty striking looking figure. There is a Glow Trooper in the game (as well as a female variant), and I'd love to see Jazwares release them as well. 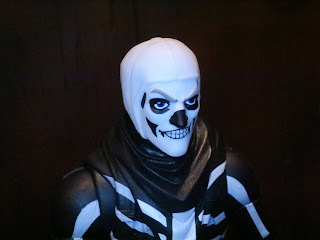 * Like the original figure, the Skull Trooper has three interchangeable face plates. The front half of the head is removable and swaps out very easily. This faceplate features the Skull Trooper with a bit of a smirk. I like the arched eyebrows. The paintwork is nice and it captures the cartoonish look of Fortnite while still being something that could fit in alongside your Marvel or DC figures as a random henchman. 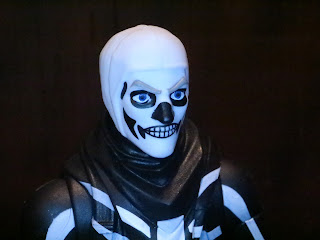 * The second face is a standard face with an intense look and a cool skeletal grimace. 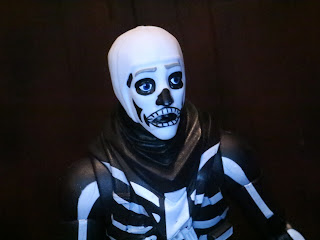 * Lastly the Skull Trooper has a face that looks frightened or surprised. It adds some nice variety to his looks and fits the often comical vibe of Fortnite. 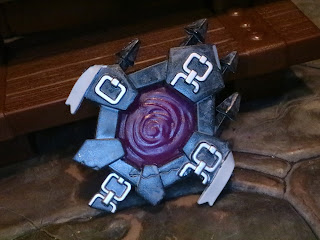 * The figure includes a backpack, or Back Bling as the game calls it. This one is called the Ghost Portal. It simply is a backpack that apparently is a portal to the world of the supernatural. The center is translucent, presumably so spirits can cross through as they desire. It's also covered with broken chains and has cemetery styled fence spikes on the top. The sides have a nice drybrushed effect as well to give it a weathered, worn look.While the original figure had blue portal, this one has a purple portal, so that's a nice and unexpected change. 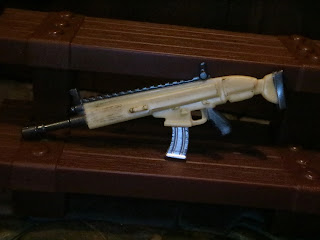 * This Skull Trooper comes with a different rifle than the previous release. This is the Siegebreaker, which The Visitor and Omega: Max Level both came with as well. 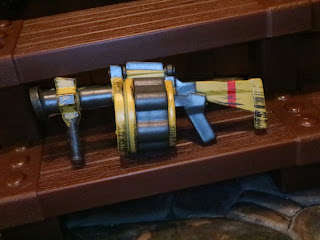 * The Skull Trooper is also carrying a grenade launcher, just like the Rabbit Raider. It captures the Fortnite look and feel while also having some very nice weathering on it. Interestingly, the style of these weapons look like what the weapons in GoldenEye007 looked like when you viewed them inside of the watch. 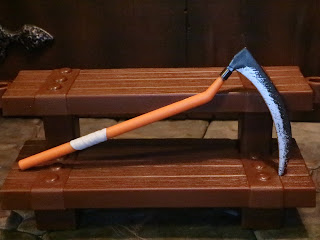 * The Skull Trooper 's harvesting tool is called The Reaper and it's the same accessory that the purple variant came with. It's easily one of the coolest looking scythes I've seen included with an action figure, especially because of the dry-brushing effect on the blade.There's a bit more silver on the blade visible this time which I think makes this all the more impressive. 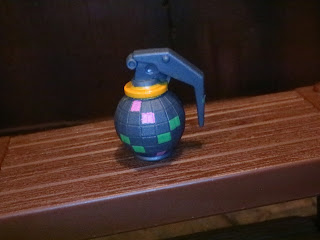 * Lastly, the Skull Trooper comes with a Boogie Bomb, which a few other figures have come with as well. The Boogie Bomb is a grenade that makes the other characters dance. It's a cool looking weapon that looks like a grenade mixed with a disco ball and it actually even has some colored panels on it. 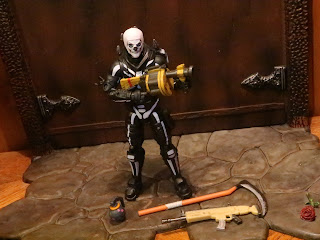 While he's just a repaint with some different accessories (though no "new" accessories), the Skull Trooper still manages to be a really nice release. It's a popular character/ skin with a great look and a ton of accessories. My biggest complaint with this line has been the presence of the hinged fingers and I think the fingers on this guy actually feel pretty good and tight, enough so that I didn't ding him for them. This is another Epic from this line, which has turned out to be one of my favorite lines of 2019. I've got two more reviews coming to finish up the 2019 Fortnite Legendary Series release, so stay tuned.