Action Figure Review: Commander Karg from Masters of the Universe Classics by Super7 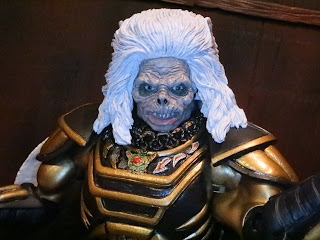 Just last week Super7 started shipping the four figures from their third and final series of Masters of the Universe Classics action figures, this time featuring figures based on the costume and character designs of William Stout that were used in the 1987 Masters of the Universe movie. I'm going to be checking all of these out in the coming week or two but first up I'm going to be reviewing Commander Karg. Karg was one of the trio of new villain introduced in the film but, oddly enough, he was not released as a figure in the vintage toyline (both Saurod and Blade were, however). Mattel also never released Karg during the main run of MOTUC figures (but they did release Saurod and Blade) but when Super7 took over they released Karg in the second series of MOTUC/ Collector's Choice figures. That figure was based on his appearance in a 1987 comic book, and it features green skin, yellow hair, and blue armor. This version, however, is quite movie accurate and has been give the designation of Commander Karg. Since the MOTUC philosophy has always been finding a way to fit all of the characters and their unique appearances together into one cohesive story/ universe, this version of Karg represents the character later in his life after he has been freed from Prison Starr after years in isolation, thus his skin has grown lighter and his hair has turned white. Whether you dig the MOTUC bio (I do) or just like that this is a movie based version of Karg, you should be happy with this figure. Let's check him out after the break... 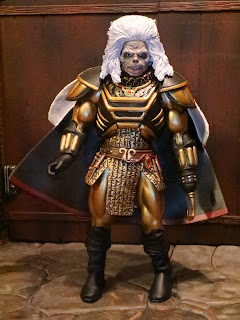 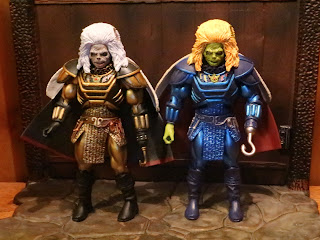 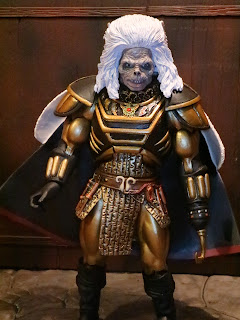 
* While he doesn't stand out as much as the previously released Karg figure (the metallic blue armor, green skin, and yellow hair definitely captures your attention), this guy certainly looks fantastic. The Karg sculpt had lots of unique sculpting and permanently affixed body armor that gives him a very unique and hefty appearance. It really works for him and makes him look quite menacing. Definitely more menacing than the film version even. 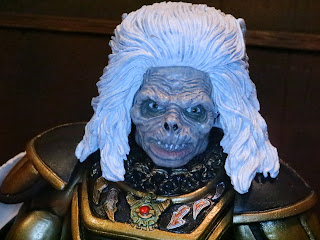 * Karg's headsculpt is one of the best Super7 ever put out in their MOTUC line (maybe the best?) and here it looks equally fantastic in the colors of movie Karg. Who would have ever expected that we'd end up with two figures of Karg on our shelves, right? 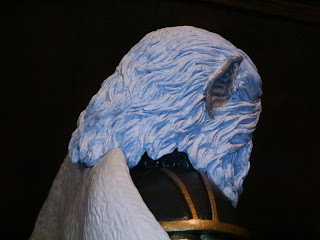 Karg not only has a massive mane of hair (it was the 1980s, after all) but his ears are visible sticking out from underneath the hair. That's a cool detail that I'm not sure I ever noticed in the film. 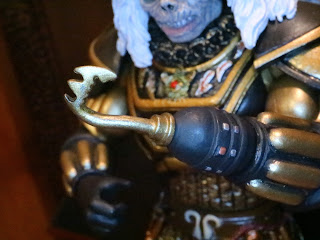 * Karg's right hand features a fearsome hook that is quite different from the hook hand of the previous figure. While the previous Karg had a very standard and smooth looking hook, this version is rather jagged and wicked looking. 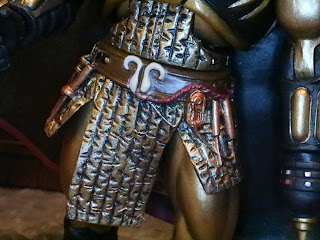 *  Karg's belt and the lower part of his tunic is cast in a soft, flexible plastic that shouldn't impede the character's movement at all. I also dig all of the weird little implements Karg carries around with him. The designer of the character, William Stout, referenced them in an interview as "strange dental tools to do his dirty work." Karg's a dark guy and is designated as the Evil Master of Cruelty and the grand inquisitor of Snake Mountain for a reason. 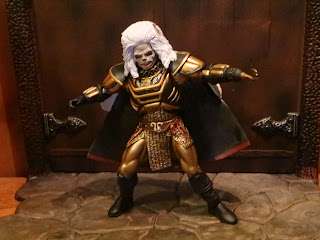 * Commander Karg definitely feels like a MOTUC figure, and he's as well articulated as any other figure in the line. Super7 definitely improved in manufacturing the MOTUC figures as the line went on and the latest series is easily the best in terms of construction. 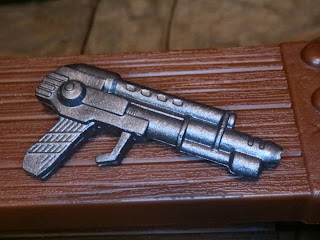 *  Karg comes with the same accessories as the previous release, the first of which is one of the pistols from the film. It's a very substantial looking sidearm and in the bios was given the name "fleshburner laser gun," which definitely seems fitting for the character. 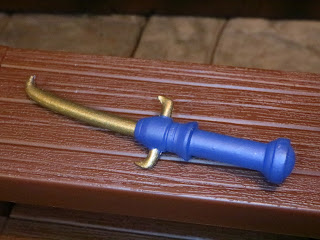 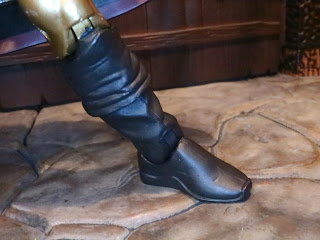 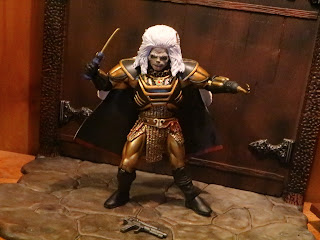 Commander Karg turned out to be a really nice figure. I don't know that I like him quite as well as the previous release (the colors on that release really impress me) but he's definitely a worthwhile addition to the MOTUC line. I'd definitely still give him a Great and a 1/2 rating, though. I mean, again, it's movie based Karg. Didn't we all think this figure would be impossible to ever have in an official capacity? Boom! Now we got him! I think most folks are more excited for the movie versions of He-Man and Skeletor, which is understandable, but don't forget about Karg. He's an action figure miracle!


If you're a fan of Karg remember that I've also reviewed the standard MOTUC Karg from Super7.