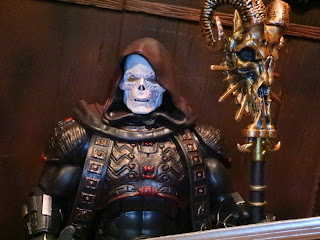 I can't even begin to discuss how excited I am to have a movie based Skeletor action figure in Masters of the Universe Classics. It's truly a great day!  While Super7 didn't release as many Masters of the Universe Classics figures during their time with the brand as I thought they would, they certainly did help to fill some gaps in the wish-lists of many fans and these movie based figures are certainly one of the biggest gaps Mattel left open. Well, I should say that these figures are actually based on the designs of William Stout who created the character and costume designs for the 1987 film. You might see some differences between the characters from the films and the figure but that's part of these figures being based on the concept designs, which is probably they only reason we're able to get them. While the 1987 film is often maligned (both fairly and unfairly, though I myself really like it) there are definitely two aspects of the film that are beyond reproach: The costume designs and Frank Langella's portrayal of Skeletor. With this figure, Dark Despot Skeletor, you get both of the best parts of the film all rolled into one. Let's check out Dark Despot Skeletor after the break... 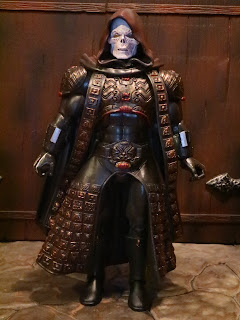 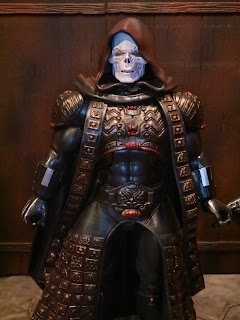 * Dark Despot Skeletor is an impressive looking MOTUC figure that definitely manages to walk the line between the traditional MOTUC aesthetic and yet still look fairly realistic, capturing the design of the movie's portrayal of the Evil Lord of Destruction. Skeletor looks very regal here, wearing what the bio calls "the black robes of ancient Gar kings and armor forged by Spikor in the magic fire of Draego-Man." I dig that. There's a lot of detail here and while the base body underneath seems to be a typical MOTUC body, the vast amount of armor and such really makes this guy feel very unique. 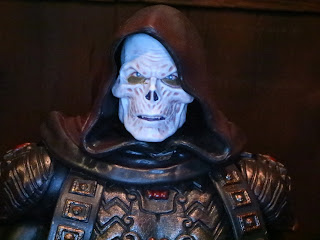 * The headsculpt is awesome. I know Commander Karg is based on the previous Karg figure, but Super7 is on a role with the headsculpts on this series of figures. While this is definitely a good representation of the film Skeletor, to tie everything together in one continuity (as is the MOTUC way) this version of Skeletor is supposed to represent a reborn Skeletor who is temporarily affected by some life-giving magic, thus his face is less traditionally skeletal. It's still very creepy though, especially the eyes. 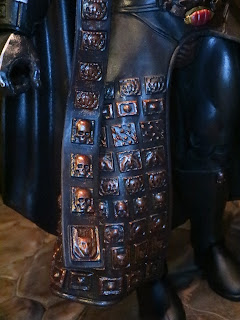 * Skeletor's robe and the tassels hanging from his cloak are covered in lots of interesting little designs that look like metal reliefs sewn on to the outfit. These are very impressive little details, something I don't recall noticing in the film, and they really give the costume a very interesting feel. It definitely feels like they might be pieces from something that have been handed down over the years, perhaps containing some sort of magical powers or evil essences. 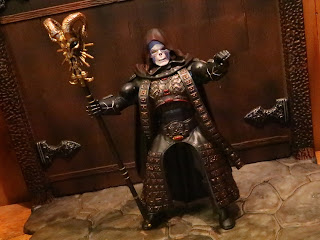 * Since Dark Despot Skeletor's wearing heavier robes and armor he's not the most poseable figure but he does move as well as most other MOTUC figures with similar designs, plus he's got the swivel/ hinge ankles and wrists that Super7 added to their figures. The plastic quality is great on these release as well, feeling much more in line with Mattel's released than some of the earlier Super7 figures did. 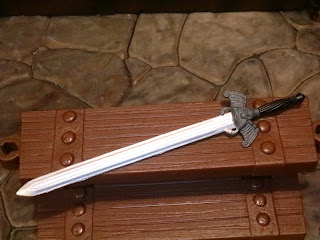 * Skeletor's accessories are all absolutely amazing, starting with his sword. It's an awesome blade complete with batwings and a skull. Do you even need a hint in order to guess that a sword like this belongs to a villain? 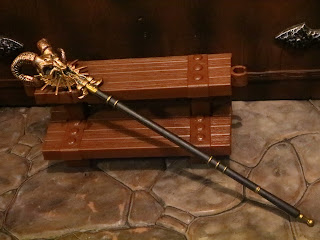 * Next up is the Havoc Staff, which might be the most well designed weapon from the movie. It's a terrific design that takes the regular havoc staff and makes it even more menacing and regal. The gold and black paintwork on this is very impressive. 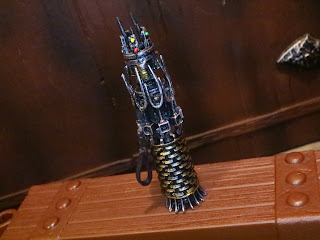 * Last, but not least, is a ... Japanse synthesizer? Wait, no, it's the cosmic key! We've received cosmic keys in MOTUC before (Preternia Disguise He-Man came with one and Gwildor came with two) but this one is definitely more accurate to the movie design. It doesn't have any moving parts but it does look really good with a highly intricate sculpt and some killer paintwork. 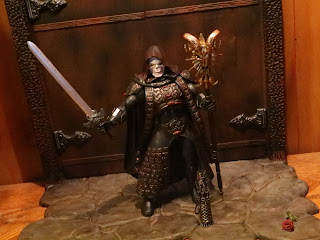 Dark despot Skeletor is another excellent inclusion in the Masters of the Universe Classics line. While he's not the greatest Skeletor figure ever made, he's a very nice MOTUC version of the Skeletor movie costume. I definitely would have liked to see some soft goods here (or at least some thinner plastics used) but overall this guy looks great, has an impressive headsculpt, and comes loaded with accessories. These guys are definitely a little more expensive than your average action figures but with all of the goodies he comes with, Dark Despot Skeletor is still a Great addition to the Masters of the Universe Classics roster. I'll be checking out God Skeletor soon, so stay tuned!


I've reviewed so many Skeletor/ Keldor based collectibles and toys on the site that I've given him how own archive: Check out Snake Mountain for all of the Skeletor reviews you could want!