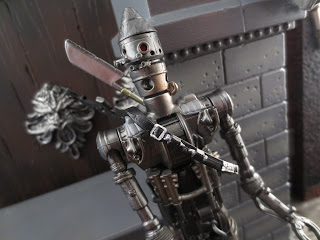 IG-88 is another figure from Phase II of the Black Series that was released in 2015 but which I never saw in stores. I finally just ordered him before he starts to disappear and becomes incredibly expensive like many other Black Series figures already have. Everyone knows Boba Fett and Bossk, but IG-88 is one of the bounty hunter that you use to begin to check someone Star Wars cred. I mean, there are hundreds and hundreds of Star Was characters and I'm sure you can name someone I don't know and I could name someone you don't know but, if you don't know IG-88, I don't trust you. I've met many a "fan" who praised how awesome Boba Fett was only to kind of freeze up when I mention IG-88. He's just that kind of character: Not insanely obscure, but definitely one that requires you to have done more than watch the movies once and go to a convention. Anyways, I knew that if I didn't pick up IG-88, I'd never accomplish my ultimate Black Series goal of having all six of the Empire Strikes Back bounty hunters: Dengar, IG-88, Boba Fett, Bossk, 4-LOM, and Zuckuss. Ready for a closer look at the figure that gets us halfway there? Then join me after the break... 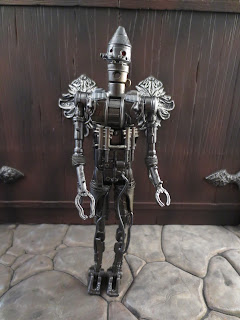 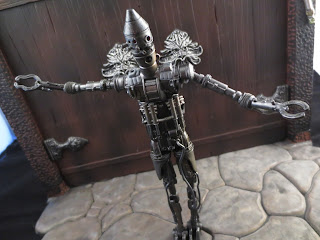 * IG-88 has some really unusual articulation and frankly, some of it is very cool. He's just really uniquely constructed which makes perfect since for the character. I'm going to mention his hips below, as they're pretty disappointing, but overall he moves in the same ways as most figures, just differently. I adore his oddly hinged chest, as it looks like a mechanically rotating device rather than just an action figure joint. 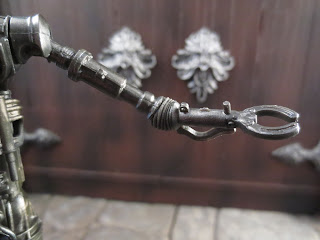 One of the cooler points of articulation are IG-88's elbows. They are swivel/hinge joints underneath a rubbery covering that really matches what is visible on the film character. The range of motion is a bit more limited than I would have liked but the presentation and appearance is incredible. 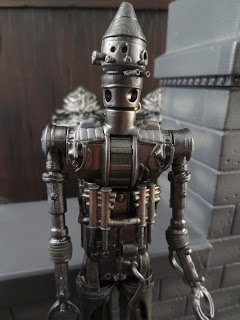 * IG-88 has always been a Star Wars character whom has had really nicely sculpted figures. The original 1980 Kenner figure (which I have standing on a shelf) is absolutely a highlight of that line but for the Black Series Hasbro has really gone all out. IG-88 is a tough character to get a good look at but from reference photos I've seen, he looks pretty accurate. The film IG-88 was really a hodge-podge of various parts (including one of the decanters in Chalmun's Cantina) which makes him really tough to replicate in the form of a plastic action figure. Hasbro did an admirable job, though, and while each and every little bit and bob isn't 100% spot on, overall it's pretty impressive. 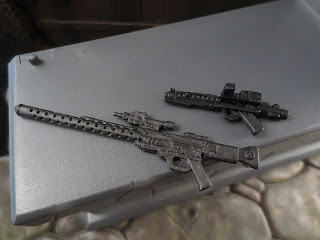 * IG-88 comes with his two rifles, both of which are modified versions of weapons we've seen with plenty of other Stormtrooper figures. They're a bit smaller, which means they weigh less and can work nicely in IG-88's smaller, spindlier arms. They're also specially design to fit in the proper hands: The E-11 (Stormtrooper blaster) fits in the right hand while the DLT-20A (longer rifle) fits in the right hand. 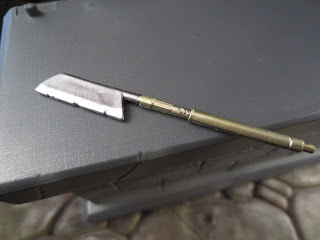 *IG-88's third accessory is his blade extension. This is something that exists on the model used in the film and as a picture in The Complete Visual Dictionary but I'm really unsure as to how it works. Even though there's a peg on the end (which is accurate to the prop) there's really no way to plug this in anywhere on IG-88. He can't hold it, so it's simply a cool looking prop that fits nicely in his bandolier. 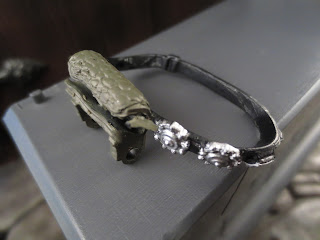 * IG-88's final accessory is his bandolier. It's a nicely sculpted piece with a pack for storing a blaster rifle, some clips to hold the blade extension, and two concussion discs for messing up fools who try to get in IG-88's way. 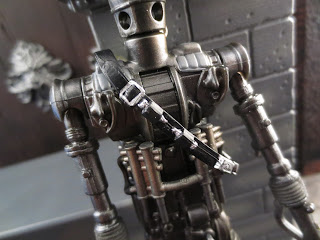 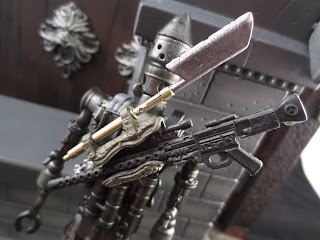 * The bandolier is awesome because it also holds the blade extension and one of the rifles. I think it's intended to hold the E-11, but I managed to fit the DLT-20A in there with no problem. 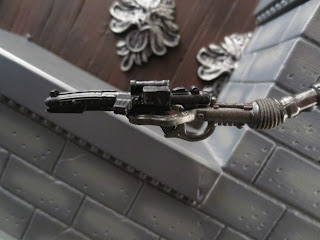 * I really like how Hasbro designed IG-88's grip. Since he has pincers that would make it incredibly difficult for the figure to hold a weapon, Hasbro placed some small pegs on his wrists that plug into the small holes on the back of his two blasters. This is a fantastic way to give IG-88 the ability to securely hold his accessories without sacrificing the integrity of the sculpt. Well done! 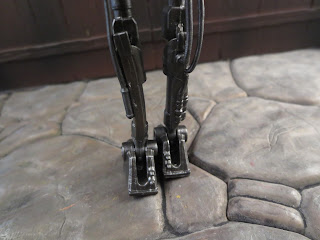 * IG-88's legs are molded in a softer plastic that arrived bent in the package. This makes it really, really tough for him to stand up properly. In addition to him being tall and thin, the softer legs really add to the danger of him tipping over. I'm going to be using one of my smaller Kaiser stands to help keep him upright. 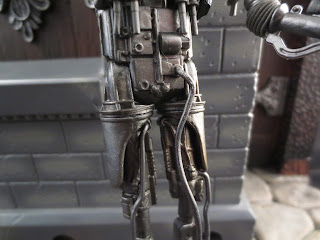 * The most disappointing thing about this figure is that the hips are simple swivel joints. That's completely unusual for The Black Series and I'm not sure why the decision was made. It's not like we ever saw IG-88 move in the film, so this isn't achieving any sort of accuracy. It just seems to artificially limit the figure's mobility. Believe me, considering we've seen other Assassin Droids move in the Clone Wars, I think it would have made sense for IG-88 to be fairly spry. 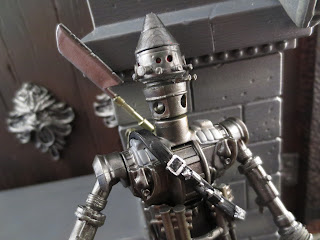 IG-88 does have some problems but there's still plenty of impressive elements to the figure, too. While I'm perplexed as to why Hasbro decided not to give him balljointed hips, the figure features some extremely impressive engineering. IG-88 does feel more like a glorified prop at times rather than a legitimate action figure, though, but he is quite well done. He's been out for around a year now and seems to be creeping up in price (he's another figure I've never seen in stores). He's a Good and a 1/2 figure and indispensable for collectors wanting all six of the ESB bounty hunters on their shelves.