The 12 Days of Christmas: Zuckuss from Star Wars: The Black Series Phase III by Hasbro 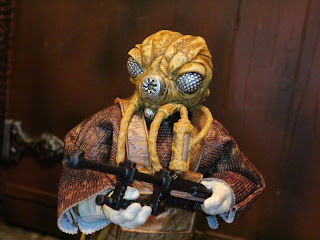 I have collected many different Star Wars lines since 1995 but Star Wars: The Black Series has absolutely become my favorite Star Wars action figure line. While it's probably the newest entry on this list (the first figures arrived in 2013) it has become my favorite to the quality of the figures and the way Hasbro continues to improve the line. Originally I planned on being highly selective with the line but over time (probably sometime during the the release of the figures from The Force Awakens) I decided I was all in on it. Throughout my time collecting the line, however, there was one group I have always longed to complete: The Empire Strikes Back bounty hunters. Finally that goal is complete! With the release of Zuckuss, originally intended to be a Toys R Us exclusive but now moved to a Disney Store exclusive, I have completed that incredibly awesome sextet of bounty hunting coolness. Let's be honest: They're probably one of the most iconic teams in Star Wars and probably one of the collecting goals of a lot of folks, right? Let's check out Zuckuss after the break... 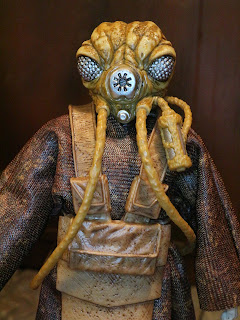 
* Zuckuss looks awesome. Hasbro has been on the ball with their sculpts this year and Zuckuss is possibly one of the best non-human sculpts they've done. Thanks to his breathing mask, findsman body cloak, and chest pouches, Zuckuss feels very complex with an excellent layered appearance. He's a shorter figure but he still feels quite substantial thanks to all of his gear. The paintwork is incredible as while Zuckuss mostly used browns, there is still a wide variety of different colors used to differentiate everything. 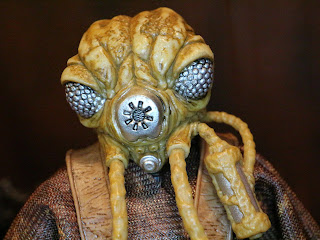 * As an ammonia breathing Gand, Zuckuss has to wear a respirator in order to keep him supplied with a steady stream of ammonia on other worlds. Hasbro did a great job of sculpting this device, along with Gand's massive silvery eyes.I love how weird he looks! 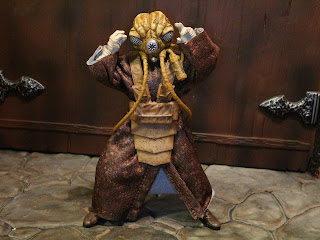 * While he's wearing his long findsman coat and lots of gear, Zuckuss is still pretty well articulated. He's actually articulated with the same model as other figures wearing soft goods like Luke Skywalker or the Emperor. That means that instead of swivel hinge elbows, Zuckuss has double hinged elbows and swivel biceps. I assume Hasbro does this because it retains the range of motion of the articulation underneath the soft goods, so good for Hasbro. That's something Mezco hasn't seemed to realize is needed yet. Single joints just don't work well underneath material. 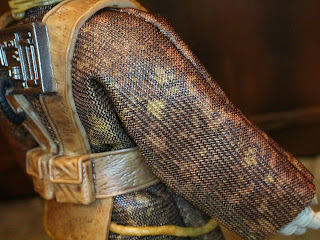 * Zuckuss' coat is quite impressive. The quality seems quite good and the print on it seems to match the film version quite well. 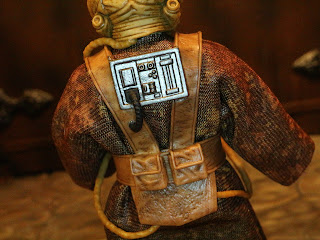 * The back of Zuckuss' gear shows off what I presume is part of his respirator. Again, we've got more solid sculpting and more impressive paint applications. 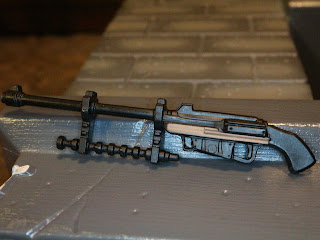 * Since a bounty hunter's gotta hunt bounty Zuckuss comes with his GRS-1 Snare rifle. The sculpt is impressive and looks highly accurate. There are also some paint applications on it as well. 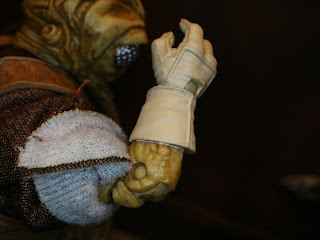 * Underneath Zuckuss' coat he seems to be fully sculpted. It's not easy to see as the coat isn't removable but it all seems to be there.

* The interior of Zuckuss' coat is white, rather than brown. This is definitely noticeable during normal play and display and throws off his vibe just a bit. Hasbro should have opted for a darker base material. 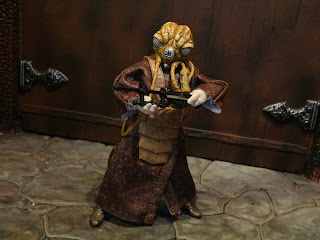 Zuckuss is another stellar figure in the Black Series this year. Seriously, Hasbro has been on a roll and Zuckuss is another figure that could easily be a top of the year contender. I don't like him as much as some other releases, but he's easily a top 10 contender for sure. He does have a bit of a mark-up, however, as he is a Disney Store exclusive. Still, Zuckuss is a Great figure and if you've been collecting the bounty hunters, you're definitely going to pick him up, right? 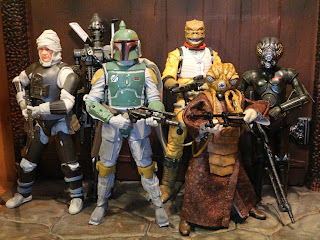 Here's a shot of all six of the crew from The Empire Strikes Back chilling out together. Dang they look nice! We've got Dengar, IG-88, Boba Fett, Bossk, Zuckuss, and 4-LOM. I think this shot justifies the Black Series as one of my favorite toylines of all time.

This is my first review of Zuckuss on the site. For more Black Series reviews, check out the following: