The 12 Days of Christmas: Firefly from G.I. Joe: Sigma 6 by Hasbro 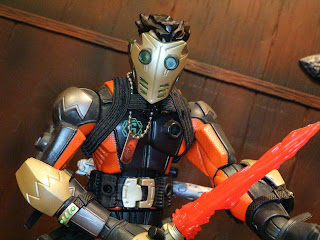 I know I'm doing these alphabetically but, if we were going by order of merit, Hasbro's G.I. Joe Sigma 6 line would easily be in my top 5 toylines of all time. Not only do I love these figures, which are much larger than your standard A Real American Hero G.I. Joe figures (but smaller than the classic 12 inch Joes) but I had a blast collecting them and interacting with the small yet passionate Joe community who dug these guys. I wrote a lot of guest and co-reviews for these guys but I do believe that Firefly is the first figure I've ever reviewed specifically for Action Figure Barbecue. The Sigma 6 line was divided up into Soldier and Commando class figures. Commando class figures sold for around $15 dollars and came with larger accessories and packaging that converted into a footlocker while the Soldier class figures retailed for around $10 bucks and came with fewer accessories on a standard blister card. Firefly was a Soldier class figure, part of the third series of Soldier figures, and I think you're going to be wowed with how many accessories he comes with. These figures were loaded with play value! Let's take a look at Firefly more closely after the break... 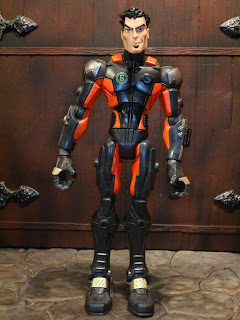 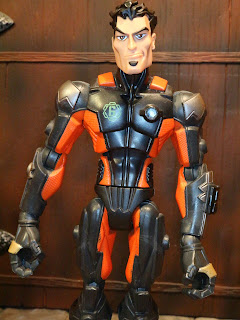 
* The Sigma 6 line also included a few subsets (Adventure Team, Combat Squad, and at one point just being rebranded as G.I. Joe) and while some of those lines featured more unique looking outfits, the original Sigma 6 figures featured bodysuits that gave the team a more cohesive. Firefly is decked out in the standard black uniform with orangish-red highlights. I like the various textures of the suit and it reminds me of Centurions, which I loved as a kid. 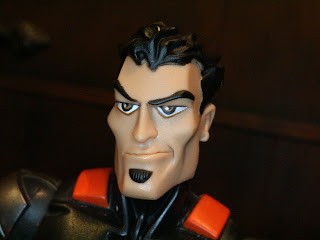 * In Sigma 6 Firefly actually starts off as a good guy. He's a member of the Sigma 6 team initially before becoming a Cobra operative later on. It was pretty cool at the time and made you question what the character's motivations were. The headsculpt is excellent. I love the angular, stylized look of the headsculpt along with the smirk and the soul patch. 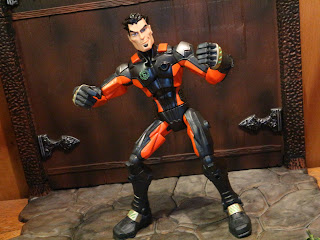 * Firefly features the standard articulation for the line which is quite functional and fun to play with, particularly for a line that seemed to be largely designed for kids first and collectors second. These are some durable toys and they'll hold up to lots of play, no doubt about it. 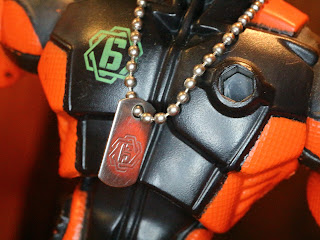 * Most members of the Sigma 6 team came with a dogtag that actually came on a small metal chain. The dogtag looks great and features a little Sigma 6 logo stamped on it. These are so cool and they really help to reinforce the team dynamic of the line. 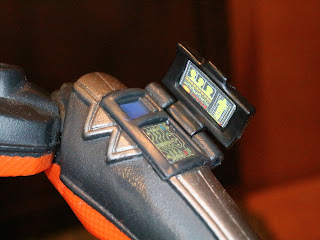 * Most of the early figures also had a flip-up communications device on their left forearm. The lid flips up and has some stickers inside to represent various screens. Remember, smartphones really weren't around at this time so this seemed like some advanced technology for the team. 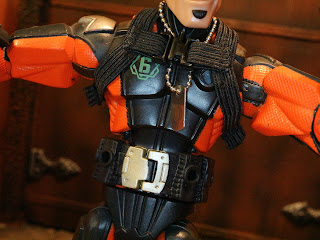 * To help Firefly's bodysuit seem a bit more unique he has a functional elastic harness (with a working plastic clip on the sternum strap) and a belt. The belt has sculpted pouches on it that each contain a hole where accessories can be stored. More on that in a minute! 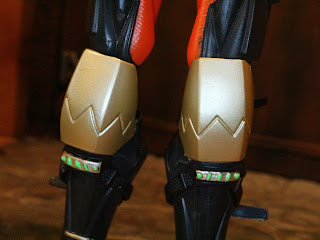 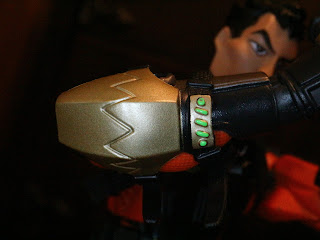 * He has removable elbow pads, too. I really like how the Sigma 6 line sort of mixed the aesthetic of the 1/18th scale G.I. Joe line with the larger amount of accessories and removable gear of the classic 12 inch offerings. 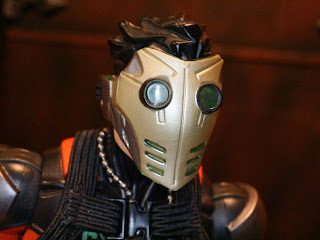 * While it's not his classic ski mask, Firefly does come with a face mask that looks a little like a welding mask. The lenses are translucent and it fits the figure very well. There's even a plastic pad for the back of Firefly's head attached to the elastic strap that keeps the mask in place. 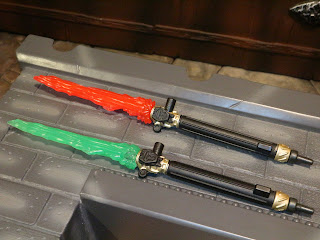 * Firefly comes with two Fire Sticks, which are kind of like flame emitting welding devices that Firefly can use for combat or sabotage. One was listed on the packaging as a Slow Burn stick while the other is a Contact Explosion stick. The flames are removable as well, just for fun. They're incredibly cool and some of my favorite accessories in the line. If you notice the little plugs on the bottoms of the sticks, these allow the Fire Sticks to interact with some of the ninja weapons in the line to build new devices. 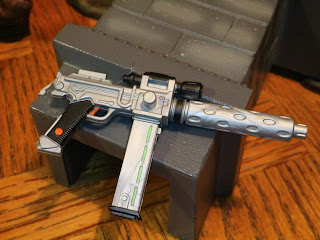 * Firefly also comes with a really cool submachine gun. Not only is the sculpt solid but this accessory had quite a few paint hits on it, too. I love it! It's another of my favorite accessories in the line. Guess what else? 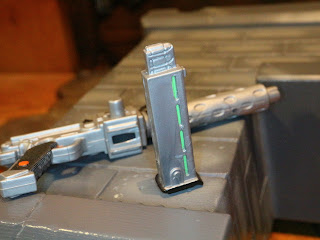 * The magazine is removable! How cool is that? I love removable magazines and this one works so well. You can even see some cartridges sculpted at the top of the magazine. 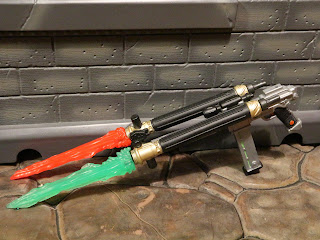 * There are two notches in the side of the smg that allow the Fire Sticks to be attached to the sides. Yes, it's a submachine gun with flaming bayonets attached to it. We can all go home now as total awesomeness has been achieved. 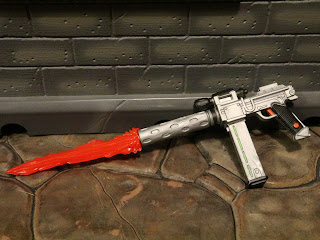 * The flame tips of the Fire Sticks can also be removed and added onto the tip of the submachine gun as a firing effect. The connectivity and play value in these figures was astounding, especially for the time. 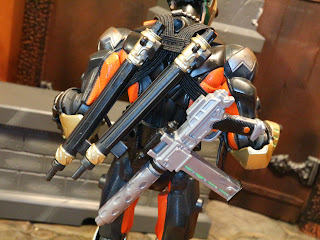 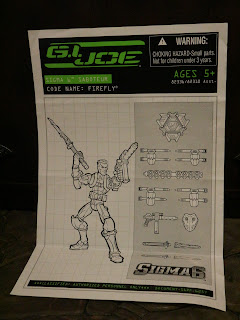 * Each figure also came with some blueprints that showed off all of the included gear and explained some of the cool features you might not notice at first. 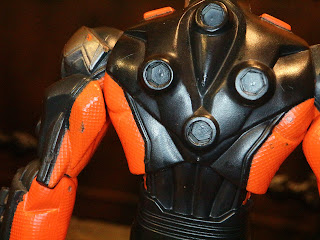 * There are definitely a few marks of paint slop on Firefly's outfit, mostly where the orange meets the black. These were mass market toys, after all, so it's not totally surprising but still worth mentioning. 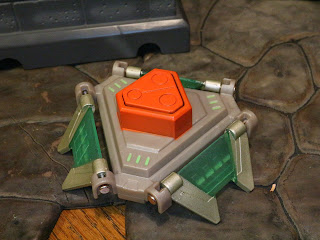 * Firefly's final accessory is called a Spinblast Trap. It's a fairly large accessory that is supposed to work like a landmine of sorts. You spin a knob on the bottom, fold the translucent green covers back into place, and then when the orange trigger on top is depressed it's intended to spin around, causing the covers to spin open. It doesn't work well, however, and just kind of sits around. It's cool as a landmine but it just doesn't function as intended. 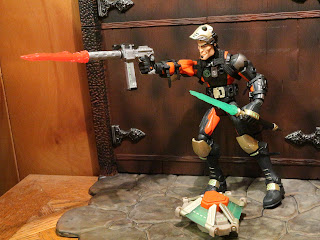 Sigma 6 is one of my favorite toylines of all time and Firefly is definitely a standout figure in a line that is full of them. I'd love to go back and review more of these, so let me know if you dig them. Firefly is an Epic figure and it's amazing what $10 dollars would have netted you from Hasbro back in 2006, huh? I've always liked the idea of Firefly initially being on the G.I. Joe team, whether as a mole or becoming a defector. He's quite different from classic depictions of the character but he does add a cool, new dimension to the character.


This is the first action figure of Firefly I've reviewed on the site. For more G.I. Joe Sigma 6 reviewes, check out the following: