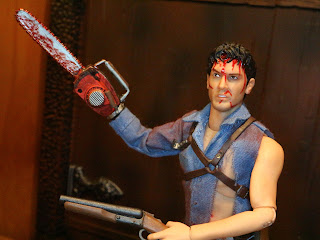 Today I'm going to begin slowly making my way through my Christmas haul and first up I'm checking out a gift I got to open on Christmas Eve: The One:12 Collective Ash from Mezco. Based on Evil Dead 2: Dead by Dawn, this version of Ash features a ripped up and blood stained outfit, a chainsaw hand, and a sawed off boomstick. While Mezco has tended to favor Marvel and DC Comics in the One:12 Collective range this year has seen quite a few releases of one-off characters from other properties, including the excellent Michael Myers from this Fall. I've kind of backed off from many Mezco's due to the ever increasing price and some quality control problems but there are so few action figures of Ash out there that I'm glad I ended up with this one. Of course, one thing that's gotta be discussed is that NECA has also released an Evil Dead 2: Dead by Dawn two-pack this year including an updated version of their Hero Ash figure along with an Evil Ed figure and lots of accessories. For that reason alone I'm going to be comparing Mezco's Ash to NECA's Ash quite a bit as my guess is that some fans are going to opt for one over the other. Let's check this one out after the break... 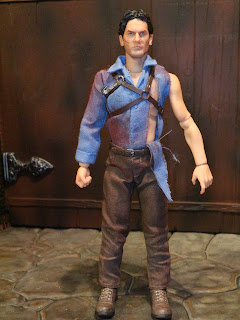 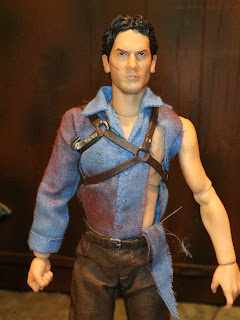 * While I'm going to give NECA more points for accuracy here, Mezco definitely still puts out some very, very impressive figures in the One:12 Collective line. They'e not just dealing with sculpts but actually using tailored clothing, something rarely seen in lines smaller than 1/6th scale. There's something about these figures that is really impressive in hand, perhaps due to the mixed media approach to the costuming. The presence of the various materials really does add an unusual, startlingly lifelike feel to the figures. 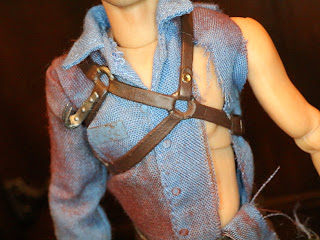 * I like the harness. It looks great, fits snugly, and features the clip so Ash can start his chainsaw one-handed. 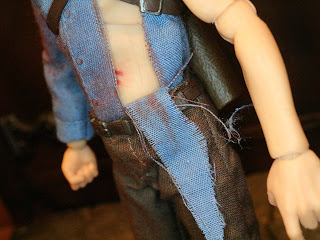 * Ash's shirt is quite ripped up and the various blood on the shirt and on his torso looks pretty cool. Actually seeing and feeling the ripped material here definitely adds a very tactile dimension to the figure. It's odd to see a manufactured figure with "damage" like this. 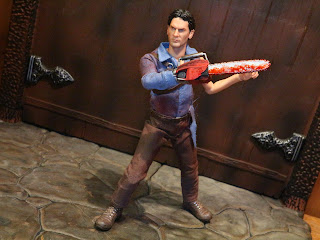 * Ash uses the slimmer, less articulated male Mezco body. It's not a terrible body by any means although the articulation is far less limited than on most other Mezco figures. Still, it feels quite sturdy and well made. Despite these being higher end figures, they don't feel fragile. To be honest, I have fewer concerns about breakage with Mezco's figures than I do with figures from anyone else other than Hasbro or Mattel. They're very nicely produced and Ash moves great for the most part. 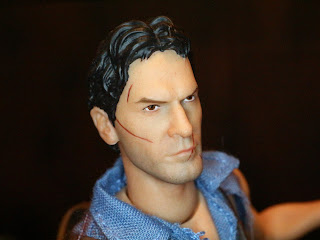 * Ash comes with three headsculpts that swap out quite easily on a double balljointed peg inside the figure's torso. First up is a more standard Ash headsculpt. I like it. It's got some cuts and bruises and even a bit of stubble. The likeness is pretty close to Bruce Campbell (whose appearance changed a bit between Evil Dead II and Army of Darkness) and is definitely recognizable. 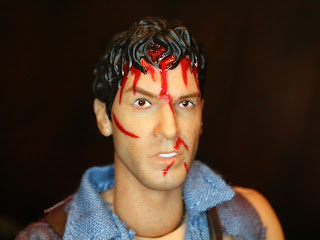 * I like the bloody Ash sculpt a bit better, though, as it seems more fitting for Evil Dead II. The head is more expressive, too, with wider eyes and a somewhat nervous gaze. 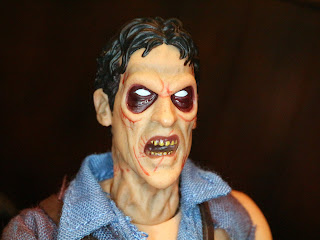 * While I'll probably use it the least, the best headsculpt is the Deadite Ash headsculpt from when Ash becomes briefly possessed near the beginning of the film. Wow! This is some top quality work right here. The detail is incredible and the paintwork is absolutely A+ all around. Look at those teeth! 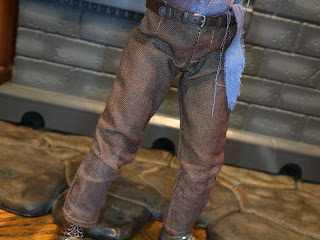 * Ash's casual trousers look great. They've got excellent tailoring, a tight belt, and some muck and mud on the bottoms of the pants. 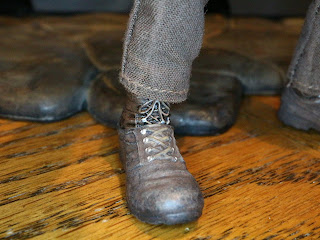 * Ash's boots look great, too. The sculpt is split up because of the balljoint but it meshes together pretty well in person. 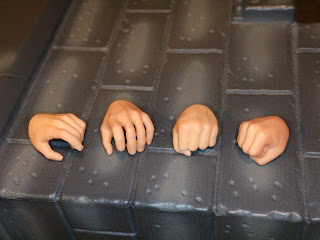 * Ash comes with four regular hands and they swap quite easily. You get a pair of fists, a shotgun wielding left hand, and a larger gripping left hand. Why we didn't get a bandaged right hand I don't know! * Ash's chainsaw is a functional hand for him (it actually slips over his right wrist peg) and it loom amazing. NECA's has better paint on the body but Mezco's is sturdier and has better blood on the blade. The blood really does look wet and fresh, which is pretty much how you'd expect the blood on Ash's chainsaw to bee in real life! 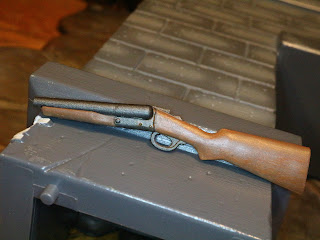 * Ash does come with his boomstick, of course. It's a decent piece, if a bit plane. I was really hoping for a bit more from Mezco here. Still, it's a boomstick. Ash has gotta have it, doesn't he? 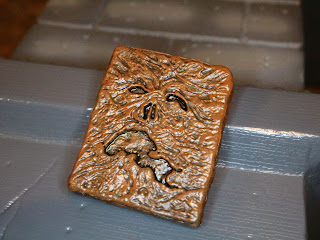 * Ash also includes the Necronomicon. It doesn't open like NECA's but it does have a nice paintjob to give it's cover a weathered, aged look. 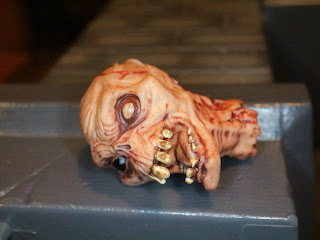 * While NECA released a Henrietta figure a few years back, Mezco has given Ash her severed head as an extra. It's definitely a cool extra and, like Mister Atom and Brainiac, continues a One:12 Collective tradition of giving characters the head of their foes as an accessory. 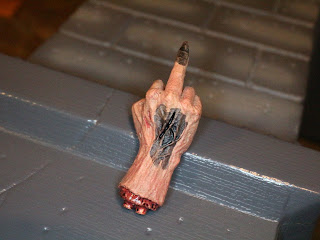 * While NECA gave us an Evil Ash hand accessory, they didn't give us one that's flipping the bird. That's what this grisly accessory is doing! Eeek! 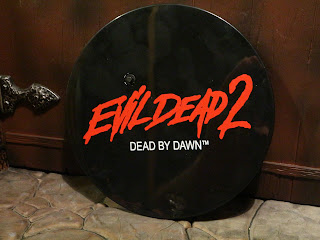 *  Like the other One:12 Collective figures, Ash features a round display base featuring a logo. His is the Evil Dead 2: Dead by Dawn logo. The base features an off-centered peg that helps to keep the figure standing nice and secure. 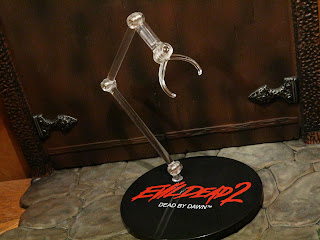 * There is also an articulated display arm that can be inserted where the peg is (you just have to remove the peg). You can get some great, secure poses here as the joints are very nice and tight on the display bar. It can absolutely support the figure's weight if you want to depict Ash leaping through the air, or perhaps being sucked out of the door of the cabin into a mysterious portal! 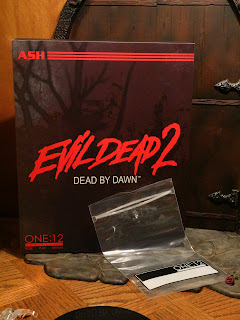 * Ash has the standard release Mezco box that is completely collector friendly and the Mezco branded Ziploc styled bag for holding the extra accessories. 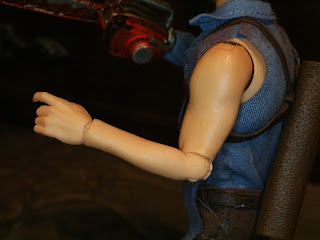 
* Ash has single jointed elbows which isn't a problem by itself, but these elbows have very little range of motion. Also, the lower arm looks way too skinny and shapeless versus the upper arm, right? 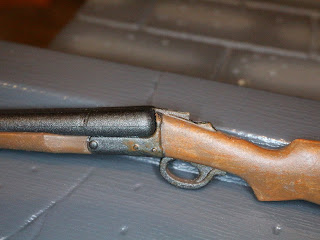 * You know what? I am disappointed that Ash's shotgun doesn't actually break down the middle and feature removable shotgun shells. Considering the cool features of the various Punisher figures, this seems like a real oversight. 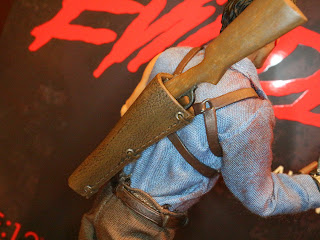 * Rather than using a pleather like material or something similar, Ash's holster is made from plastic. While it looks a bit oversized, it also is a fairly tight fit for the shotgun, making it hard to get in there sometimes. Why didn't Mezco go with soft goods here? 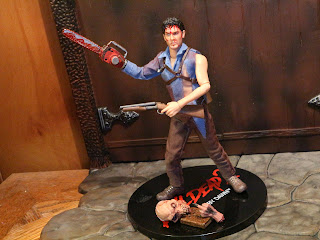 Mezco made a very good Ash figure. A Great and a 1/2 Ash figure, even. I do really like it, although you're paying about three or four times as much for it as you would be for one of of NECA's Ash figures. Is it worth it to you? I do think Mezco missed some opportunities here, such as the opening shotgun and giving Ash a bandage for his stump, but they did a solid job on nearly everything else. Evil Dead fans may just end up wanting both but for most other collectors, price and style are going to be the two determining factors as to which Ash you need. This one might be my second choice, but that sure doesn't mean he still isn't groovy.

I've reviewed a few Ash Williams figures before, including the Cult Classics S-Mart Ash, and the NECA Evil Dead II Deadite Ash and Hero Ash, and the Hero Ash update from the 2-pack with Evil Ed.
Posted by Barbecue17 at 12/27/2018