The 12 Days of Christmas: Jungle Fighters from Guts! by Mattel 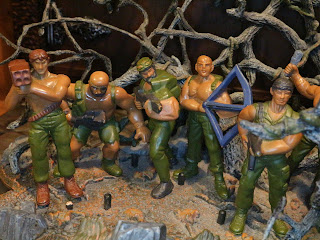 For today's review from one of my twelve favorite toylines of all time, I'm checking out the Jungle Fighters from Mattel's 1986 minifigure line Guts! Most of these guys are my original childhood figures as I've owned most of the line since I was pretty young. While plastic army men are one of the toys that nearly everyone has owned at some point, Guts! went a step further by giving us really unique sculpts with painted details. These are some of my favorite minifigures of all time and they've always been a toy that I've never had any intention of getting of. Today I'm checking out the Jungle Fighters set, one of the six sets in the Guts line. Available in 2-packs, 5-packs, and a 10 pack, the Jungle Fighters definitely had a bit of a Missing in Action/ 80s action movie vibe to them. To be honest, I always used most of them as bad guys as they kind of reminded me of some sort of guerilla faction. They're definitely the faction with the most character, so that's why I'm showing them off. I've talked about my love for Guts! many times over the years but I'm finally getting the chance to show them off! More after the break... 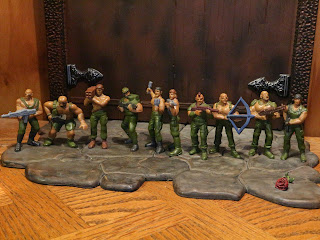 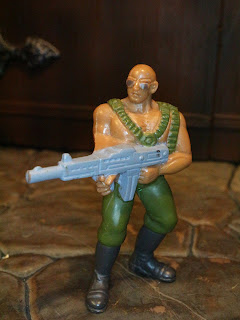 * First off.... Yup! Guts! figures actually have legitimate names. This is Cold Steel. He's a pretty standard looking tough guy with his shaved head, bulging muscles, and sunglasses. He's also carrying a massive machine gun. His bio says it's a rebuilt AK47 Machine Gun, but this looks nothing like an AK47, as it is a bullpup styled rifle. It looks more like something from the SA-80 family. Maybe an L86A1 perhaps? Anyways, this dude looks like he means business. I love his harness and the general sense of 1980s awesomeness this guy just exudes! 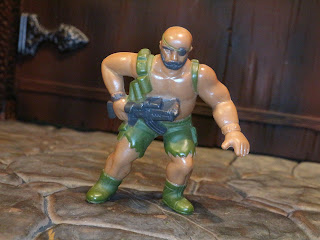 * Next up is... Dog Breath? Yup. Dog Breath. Sheesh. We went from a guy named Cold Steel to a guy named Dog Breath. Dragon Breath is an interesting figure as he's posed looking like he is... stooping over due to sciatica? Twerking? Blindly feeling for the edge of a table in the dark? In reality I always felt he looked like he was hanging out up in a tree, waiting to ambush someone. His rifle is awesome, as are the various canister grenades on his webgear. Plus... eye patch! 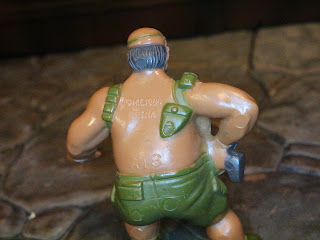 * Let me take a second to show off a few of the cool little random details. Dog Breath does have a holster on the back of his webgear, so that's cool. It'd be a pain to get to, but it's cool. Little details like this just make these guys seem so much cooler. It's the kind of detail you'd expect to find on a A Real American Hero G.I. Joe, not a plastic army man minifigure. 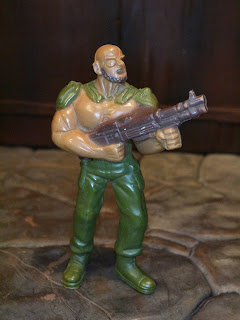 * Although he isn't accompanied by Yakko or Dot, Whack is still a pretty mean customer and a force to be reckoned with. He's actually one of the figures I must have lost at some point during my childhood that I had to seek out a few years back. Whacko kind of looks like he would fit in as one of the Dreadnoks, doesn't he? He's also aiming his weapon up at the sky. What's he shooting at? Something in the trees? Oh my gosh, I sure wish I had a Predator figure in this scale! What if he is shooting up at something unseen in the trees? 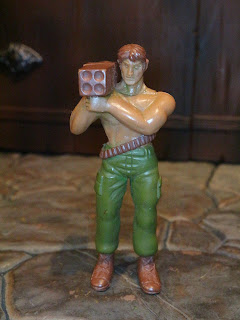 * Hot Flash is another character that brings to mind 80s action movie manliness. He's toting around a quad barreled M202A1 FLASH, although the bio inexplicably calls this a ballistic air rifle. What the heck is that supposed to be? Anyways, I love this guy.  I always assumed he was a villain, but definitely a competent one. 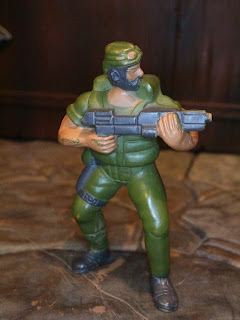 * Hair Trigger is another of my favorites. While the bio says he's using a grenade launcher, I have always thought he was carrying a tactical shotgun of some sort. This guy looks like he's ready for some guerilla warfare and thus was usually one of the heroes in my campaigns. He looks like a special ops guy who has embedded himself deep behind enemy lines and is now taking them out as a one man army. 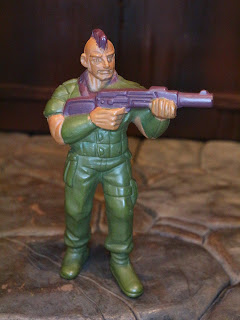 * Lone Wolf is another cool figure but also another figure that I somehow lost during my childhood. I picked him up a few years back and I really dig him. He makes for a great villain or a great special operations trooper, too.  His rifle is cool, too. His maroonish-brown color highlights help him stand out a bit from the rest of the crowd, don't they? 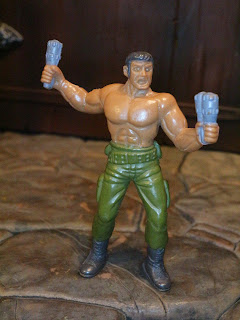 * Cool Hand looks absolutely insane! This guy looks so, so pissed off and that makes for a great villain. I love how he's just running around with handfuls of stick grenades. The expression is perfect for a grenadier who does nothing but toss explosive death, right? 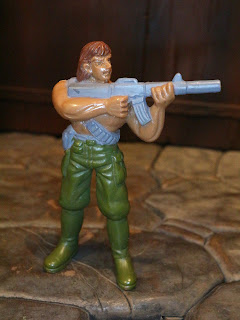 * Any plastic army man in this standard rifle firing position is a good one and Beach Bum definitely fits that bill. He has a great AR-15 styled rifle, long hair, and a solid pose. He makes a great generic bad guy, too, as that's almost always what I used him for. 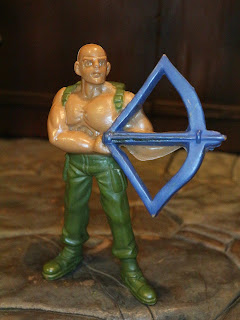 * Bill Tell, a play on the famed archer William Tell, kind of looks like a variant of Cold Steel. Seriously, they could be the same guy! Anyways, Bill Tell has a crossbow and a backpack that looks like he might also be the radio operator or something. The blue crossbow also helps him to stand out from the team although his massive muscles ensure that he fits right in, too. 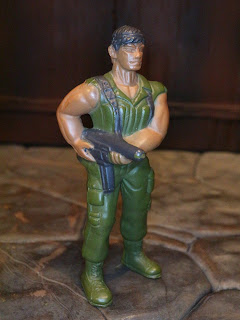 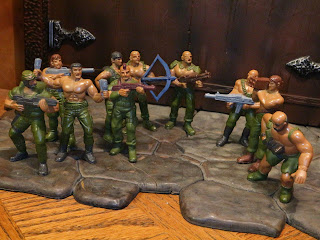 So... that's a look at the Guts! Jungle Fighters. Again, these guys were sold in 2 packs, 5 packs, and a 10 pack with all of the figures, so you may have some from childhood but not all of them. They're some of my favorites and I really wish Mattel had made a few more sets. Overall there are only 60 figures in the line (along with a few vehicles) but it doesn't feel like enough. This is an Epic set, though, and has been one of my favorites since childhood. They're not too tough to come by so if you dig military themed minifigures, hunt them down!