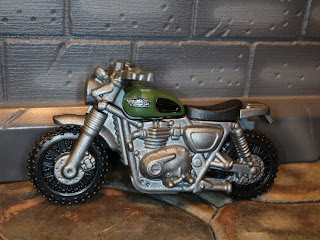 The Matchbox Jurassic World line has been crazy expansive this year! It's one of those lines that I figured would be a one off thing but it keeps going and going and going! Today I'm checking out one of three new vehicles I found a couple of weeks ago at my local Wal-Mart while out grabbing some Christmas presents. It's Owen Grady's '15 Triumph Scrambler, the motorcycle Owen uses to pursue the Indominus Rex and lead Blue and the raptor pack into battle. I had heard this one was coming out but I was still surprised to see it on a store shelf. Let's check it out after the break... 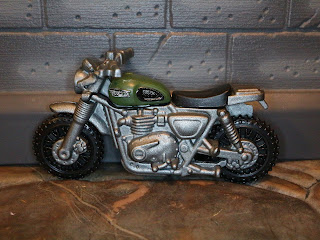 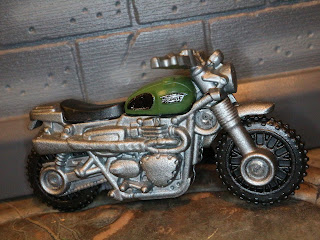 * The Triumph Scrambler is a pretty nice looking motorcycle. While it's a solid sculpt, without all of the separate pieces and ability to see through parts of the bike like you might expect from a motorcycle, it looks fairly accurate to my eyes. The name "Triumph" is even stamped onto the sides of the cycle on the green part at the top. 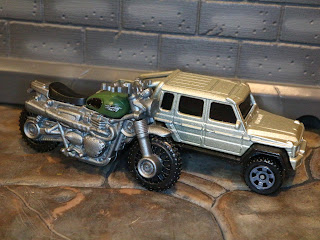 * The Triumph Scrambler is huge! Here's the Triumph Scrambler next to another vehicle in the series and it actually dwarfs it. I can understand that Mattel couldn't have really made it in scale without it looking far too small in the package, but maybe just a bit smaller? 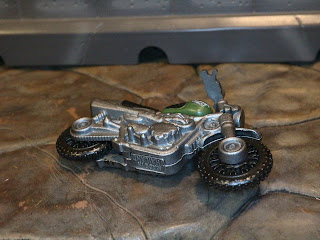 * Here's my biggest complaint about this piece: There is no way to keep it standing up! No kickstand, no display stand, no flat part on the bottom for it to rest on, nothing. What are you supposed to do with this? Unless you're actively playing with it it's just going to have to lay flat on its side. That's kind of lame, right? 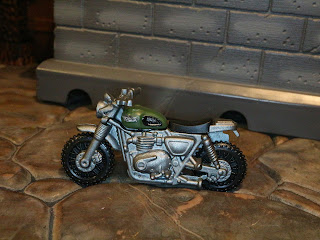 This thing only does cost a buck, so that's not bad, and it's a cool toy, but the fact that you really cannot stand it up at all without leaning it against something seems to make it feel pretty useless and poorly designed. A kickstand would have been pretty simple and easy to pull off, right? I like the sculpt and paint but the fact that I can't stand this on a shelf with the rest of the vehicles in this series is a bummer. It's an Eh vehicle to me. Good for completests on this line but useless to anyone else.