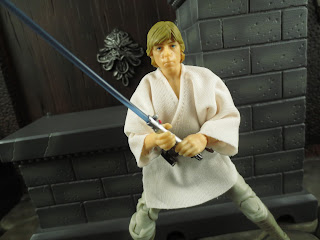 When you think about Star Wars action figures, most collectors who cut their teeth during either the vintage era or the POTF2 era will probably immediately think of Luke Skywalker in his classic Tatooine desert duds. The classic A New Hope version of Luke was probably the first Star Wars figure that many of us picked up, whether it was the smiling, happy vintage version with a yellow lightsaber or the hulked out POTF2 version that put He-Man to shame. Hasbro loves to release this version of Luke which makes it seem rather bizarre that this is the first time he's been released in The Black Series. I'm surprised that Hasbro was able to go nearly three years without this classic variation but I'm glad that we finally got him. Of course, this figure is definitely going to be a bit controversial as Hasbro opted to go with a soft goods tunic on him, a decision not everyone is in favor of. There have been a few figures in the Black Series that have utilized soft goods for capes, cloaks, and even scarves, but Luke's tunic is a little different as it's more of a fitted garment rather than something that hangs loose and free. Want to see how things worked out? Then join me after the break... 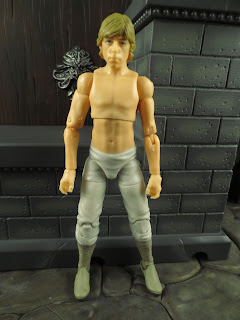 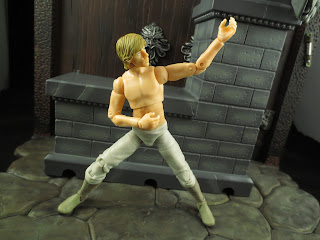 * If you want to look at one thing this figure does absolutely right, it's the articulation. Since he's covered by his tunic, Hasbro went with an incredibly well designed torso for Luke that features double-hinged elbows and a really effective mid-torso joint. He's definitely one of the most well articulated figures in this series and is tons of fun to play with. Even two handed lightsaber poses work well with this guy. 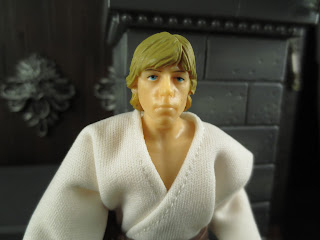 * This isn't a bad portrait of a young Luke Skywalker, although it's not as good as the X-Wing Pilot version of Luke from 2013. Still, I like the design of the hair. I think Hasbro did a much better job on Luke's hair color than they tend to do. I've seen them do Luke with brown, yellow, two-tone, and even pink hair in my time, and I think this option was better than much of what they've done. 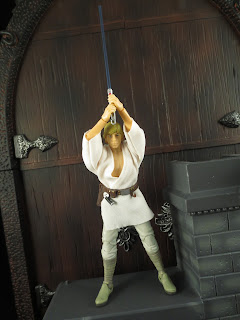 * So, let's talk a little bit about Hasbro's decision to give Luke a soft goods tunic because it's really a mixed bag. I think soft goods can work really well on 6-7 inch scaled figures if they're designed right and used for things like cloaks, capes, and other loose fitting or hanging garments. Giving Luke a cloth tunic doesn't work perfectly but they did choose a nice quality material for his garment. It also gives you the option of giving Luke the more open chested look of the Brothers Hildebrandt's classic poster, which honestly looks pretty cool here. I appreciate the effort Hasbro put into this as it's clear they didn't just try to phone things in. I'm also glad they didn't go with a half material/ half plastic look as they've done in the 1/18th scale line before. That just never works for me. 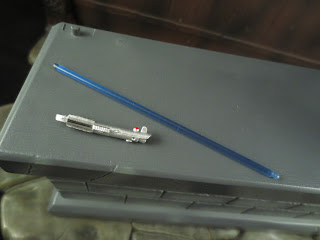 * Of course, Luke comes with his father's lightsaber. While it's always nice to have this, I a starting to build a small collection of the Skywalker lightsaber. This one has a nice dark blue blade and some solid paintwork for an accessory. It also has the appropriate loop so it can hang from Luke's belt. 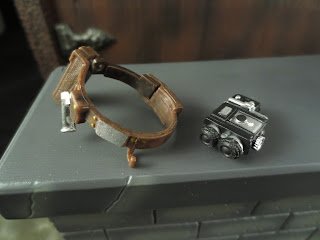 * Besides the lightsaber and his tunic, Luke comes with two other accessories: His utility belt and a pair of macrobinoculars. These are two really incredible accessories that feature a ton of paint detail on them. The utility belt is really well detailed while the macrobinoculars have some excellent paintwork and can actually attach to the belt. These are some really good accessories; some of the best we've seen in the Black Series, actually. 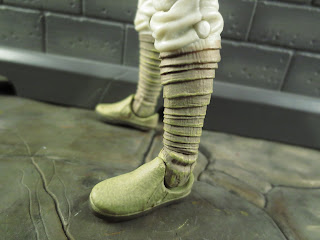 * It's not a major thing but I just wanted to point out that Luke's boots look awesome. They have a really great dirty looking paint job and kind of a gritty texture to them, too. I can't wait to see Hasbro do a Tusken Raider with this level of detail. 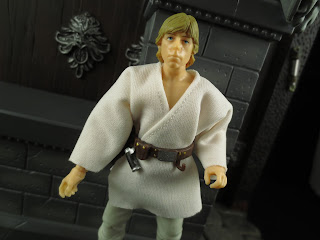 
* The robe seems like it could be a tiny bit oversized. The sleeves in particular look just a bit too large and often look awkward in certain poses. 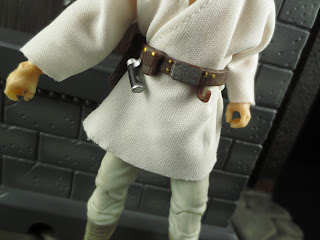 * I think that the bottom of the could have been designed a bit better. Honestly, I kind of wish that there had been some sort of internal waistband or something to help keep the tunic better aligned. It can be tough to work everything out so that it looks good, but when you start posing Luke you'll have to readjust everything again. I honestly wish that Hasbro had gone with a sculpted robe and then included Luke's ponch as a soft goods piece. Seems like a better idea. 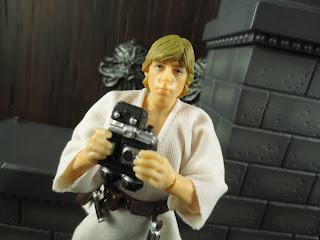 Hasbro tried something different here and while it's not atrocious, it's not great, either. It doesn't kill my enjoyment of this figure as you can still get him in a great pose and he'll look fine, but when you're moving him around you'll be constantly fidgeting with the tunic. Of course, maybe Hasbro will someday offer us a sculpted version of the tunic on a future variation? I really find myself wishing that we had a Luke figure with his floppy desert hat, poncho, and rifle. And a Stormtrooper utility belt like Han had. This is a Good figure, but I'm sure Hasbro can sell us a few more variations down the line where we can see improvement.

I've reviewed most every other from the Black Series, including: