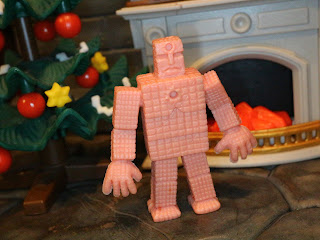 Merry Christmas Eve Eve! We're almost at the big day but that doesn't mean we need a big toy to have some fun! Today's entry on this list of my 12 favorite toylines of all time is Sunshine [A] from Mattel's M.U.S.C.L.E. line. In Kinnikuman, Sunshine is one of the Akuma Chojin and hails from Nazca, Peru. I believe he is meant to be made out of sand and thus is a shape shifter of sorts, meaning there are multiple different version of him in the line. I remember catching on to this as a kid and finding it very cool that this guy had different forms. I assumed he was a robot or made of blocks but being a sand construct makes sense, too. A lot of his different forms, such as an arch and a top, are related to his various wrestling moves. Maybe I'll get around to reviewing those figures someday as well. For today, though, we'll just check out the standard Sunshine after the break... 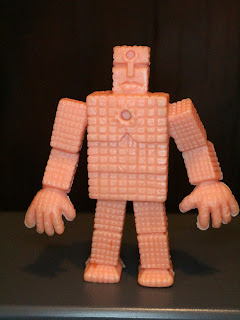 Originally Sold in: 4 and 10 packs 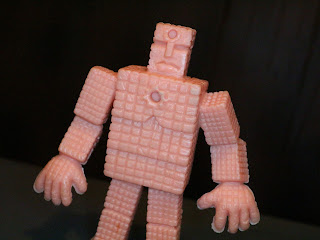 * I love how blocky Sunshine looks. There are certain M.U.S.C.L.E. figures that stand out more than the rest and I think Sunshine is one of those. He's just such an unusual looking character without looking absolutely off the wall crazy. I also have always liked the sun shaped images on his chest and forehead. I always pretended that he could shoot energy beams out of them. 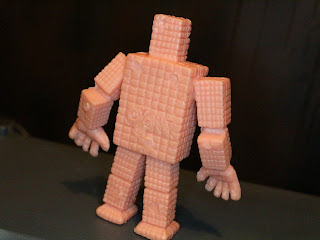 * Here's a look at the rear of Sunshine. The grid like design is really impressive with incredibly sharp detail. That's one of the best things about M.U.S.C.L.E.: The solid plastic used here really allowed for some excellent, crisp detail. 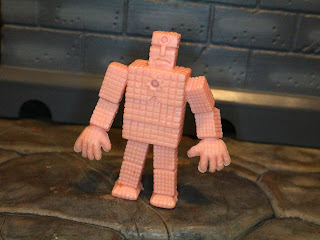 Sunshine is another one of the M.U.S.C.L.E. greats. I actually prefer some of the other shaped Sunshine figures to this one, but this guy is the original so it made sense to review him first. M.U.S.C.L.E. is another of my childhood toylines that I never even contemplated selling or trading off. They've always been special to me and I continue to add figures to the collection whenever I get the chance. Heck, now that Super7 is producing more M.U.S.C.L.E. figures (although not based on Kinnikuman) the line is actually just getting better and better. Sunshine is a Great and a 1/2 minifigure and another example of what makes the vintage M.U.S.C.L.E. such a great toyline. 32 years later and these are still boss. If I woke up and found my stocking filled with M.U.S.C.L.E. figures, I'd still be 100% satisfied.


This is the first figure of Sunshine I've reviewed on the site. For more M.U.S.C.L.E. reviews, check out the following: